Manchester United talisman Bruno Fernandes has been brilliantly trolled by a savage ‘compilation’ put together by a rival fan on Twitter after an uncharacteristically illusive display during his side’s Carabao Cup semi-final defeat to Manchester City on Wednesday evening.

Fernandes has arguably been the player of the season so far in the Premier League, with his influence a major contributor to how and why United find themselves in an unlikely contention for the title. However, he was unable to prevent his side from being beaten by City at Old Trafford.

The Portuguese midfielder, who oftentimes pops up with a moment of magic to save United’s blushes in their time of need, had no tricks up his sleeve tonight which could overturn the deficit and turn the contest in the Red Devils’ favour. As a result, it’s City who are heading to Wembley.

Fernandes will be ruing his unusual lack of influence, no doubt, and this video posted by a rival fan on Twitter will do little to make him feel better about it. Have a look at the clip below of Bruno’s ‘highlights’ in the game. Spoiler alert – it’s the shortest compilation you’re ever likely to see. 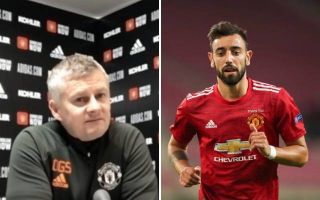 Fans of Man United’s rivals can be forgiven for making the most of their opportunity to mock Fernandes, for one has scarcely come along ever since he arrived from Sporting Lisbon a year ago. He’s made mince meat of the Premier League to date.

If anything, tasting defeat in tonight’s semi-final, particularly on United’s own turf, will only leave Fernandes more motivated to lead his side’s pursuit of the Premier League title this campaign. You get the feeling that illusive performances of this nature will never become the norm – he won’t allow it.