Who is Dmitry Mazepin? As Formula 1 community digests the arrival of the Mazepin family the question remains.

Dmitry Mazepin is often described as a Russian oligarch born in Belarus who made his fortune in the Russian chemical and fertilizer industries through his ownership of Uralchem and potash fertilizer company Uralkali.

These positions make him one of the most important players in the Russian chemicals and fertilizer industries, which are among the most important industries in Russia. His net worth is hard to ascertain with estimates ranging from $1.3 billion to $7.1 billion but either way he has a sizeable bank account! There have been numerous scandals and investigations over the years into Mazepin’s business dealings that question his tactics and corporate governance.

Recently, Mazepin has been in the international and Russian press as he has been active in Belarusian affairs – he proposed the formation of a committee in Belarus that would mediate between protesters and the Lukashenko government. Some sources speculate this is part of a move to take over Belaruskali, the state fertilizer company.

Media articles from 2013-2016 described Mazepin as being close and maintaining influential connections with the Lukashenko government.

Mazepin is not new to F1 with his attempt to purchase the Force India team a process which he lost to one Lawrence Stroll.
Mazepin fought back and filed a lawsuit claiming tender irregularities by the bid administrators overseeing the sale of the team.
He said that the team that provided a lower offer won the bid, and as a result, Force India shareholders’ interests and profits were not prioritized.

The case was heard by Mr Justice Miles in the High Court over seven days in November 2020, and in a lengthy judgement issued in December, he dismissed all of Uralkali’s claims.

Dmitry Mazepin himself did not appear as a witness, and Uralkali was represented by director Paul Ostling. In his judgement, Justice Miles made it clear that the key player’s failure to appear in person had not helped Uralkali’s case. It was also rumoured that Mazepin was interested in purchasing the Williams F1 team, after his attempt to buy Force India went sour. Then last October he resurfaced with the speculated bid to buy out Gene Haas with the end result in a sponsorship deal with the obligatory race seat for Jnr.

Despite being a wealthy oligarch with ties to the Kremlin, Mazepin has taken great care to date to avoid any public scrutiny, especially outside Russia where he remains almost completely unknown. However, he has not completely evaded the attention of lawmakers in the US and Europe.

Mazepin was recently described by prominent Washington think tank Atlantic Council, as someone that the U.S. government should consider for sanctions due to his apparent attempt to profit from recent unrest in Belarus to take over the Belarusian fertilizer giant Belaruskali, which would further consolidate his and Russia’s control of the global fertilizer industry. Both the US and the EU are looking to apply economic sanctions on Belarus in the coming months, and it is likely that Mazepin is in their crosshairs. 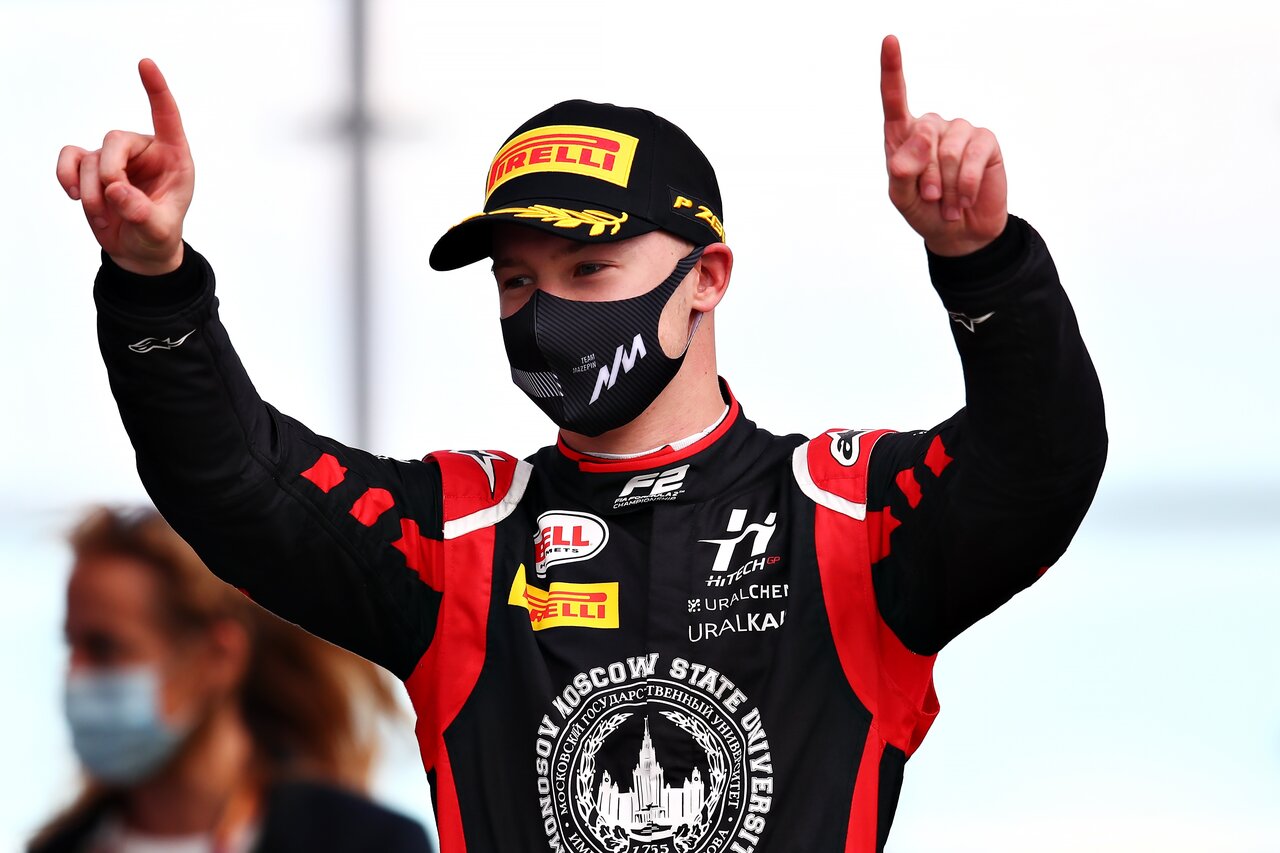 NORTHAMPTON, ENGLAND – AUGUST 01: Race winner Nikita Mazepin of Russia and Hitech Grand Prix celebrates on the podium during the feature race for the Formula 2 Championship at Silverstone on August 01, 2020 in Northampton, England. (Photo by Joe Portlock – Formula 1/Formula 1 via Getty Images)

Mazepin has embarked on an aggressive African expansion in Zambia, Angola, Zimbabwe, and several other African countries.
He is now Chairman of the Russia-Zimbabwe Business Council as part of the Kremlin’s efforts to expand Russian influence in Africa. His companies Uralchem and Uralkali have significant investments in Zimbabwe, Zambia, and Angola, aligning with the Kremlin’s strategy to grow its influence in Africa. It will be of interest to Mazepin that F1 is closely looking at hosting a race in the African continent.

At a time when the US is considering further sanctions against Belarus (under the new Biden administration), the potential implications for Haas and F1 are particularly serious. You can only imagine Gene Haas pondering is it worth all the aggravation.
In the interests of balance, it is worth noting Mazepin is one of Russia’s biggest philanthropists, who supports, among other things, sports and has bought school busses for poor regions. In 2012 he purchased $700,000 worth of cars for large, low-income families. Mazepin holds a PhD in Economics.

The post In the Pit Lane – Who is Dmitry Mazepin? appeared first on Paddock Magazine.