Arsenal made it four wins from four in the Europa League, beating Molde 3-0 to qualify for the knock-out stages. I don’t think it’s a game which merits a lot of analysis, nevertheless there were some positives we can focus on this morning.

It was a good night for …

Nicolas Pepe: Ok, scoring against Molde doesn’t completely make up for the fact he got sent off against Leeds and misses three Premier League games. Especially when you see him score and realise we could badly use that option for those games, but it is what it is.

He played well, with genuine intent and purpose throughout. Not everything he tried came off, but I liked that he tried things. He hit the bar, created a great chance for Eddie Nketiah, and cracked in his fourth goal of the season early in the second half to calm our nerves and instill some confidence in the team.

He finished with game with 6 shots, 4 key passes, 8 dribbles and a smile on his face. He looked happy, and I was glad to see that.

Mikel Arteta: Not so much because we won 3-0, but I think what he got from Pepe was important. I suspect there was a touch of relief in there, to be honest. His initial comments after the red card on Sunday were a touch injudicious, and as I mentioned yesterday, out of character for a manager who has, thus far at least, done his best to keep all problems in-house and not have them play out in the public eye.

Before the game he spoke glowingly of the club’s record signing, in particular his responsibility to get more out of him and the investment the club made in him. He spoke afterwards about how pleased he was with Pepe’s response, and something which could have been an issue has been smoothed over very quickly, and in the best possible way.

Joe Willock: The midfielder ended the game with two assists to his name. Ok, the first one was a lot more down to what Pepe did than his cross, but you can’t take anything away from his second. A burst down the right hand side, he saw the run of Reiss Nelson and the low ball into the middle was perfect, making for a simple enough finish.

It’s the most Joe Willock thing in the world that a player who was ostensibly one of our central midfielders popped up with two assists from wide positions on the left and then the right.

Reiss Nelson: He was lively and dangerous down the left, and marked his first start since the Dundalk game with a goal, getting on the end of Willock’s cross with a smart run across the goal.

It was reward for the hard work he’s been putting in, something Arteta noted afterwards:

He’s made some big steps in the last month or so. We’re doing a lot of work with him, obviously. He’s so willing. He’s asking for more all the time. He wants individual meetings.

He wants to work on the pitch in certain aspects in which we think he can improve. He’s training really really well, he’s developing as well. He had a click and we needed that click.

Folarin Balogun: The charm offensive to keep the young striker is on. He’s out of contract in June, things haven’t progressed regarding a renewal (but perhaps will now the people doing the negotiating have changed), and before the game Arteta made it clear he wants him to stay.

I’ll admit, I thought he might get a bit more than 8 minutes, but he made them count. His goal came at the end of a really nice Arsenal move, the finish wasn’t the most emphatic he’ll have ever made, but they all count. When you score your first ever Arsenal goal with your first ever shot for the senior team with your first touch after coming on as a sub, you can be very pleased with yourself.

With qualification secured, and Arsenal facing a hectic schedule in December, chances are he’ll see some more playing time in the final two Europa League group games, and if it helps convince him his future lies here, then that can only be a positive.

Emile Smith Rowe: He made his first appearance of the season last night after enduring some injury problems. He’s a bright, sharp player who can play between the midfield lines and boy could we use some of that. Early days of course, he’s still young, but he came on and made a tangible contribution with an assist.

The Arsenal fan: A limited number of fans were allowed into the game last night, and every so often the TV cameras would cut to them. The home supporters were socially distanced and did their best to get behind their team.

TV pictures also showed what appeared to be a lone Arsenal fan, with a flag, doing his best to back the lads, making noise with the empty seats alongside him. Well done that man! 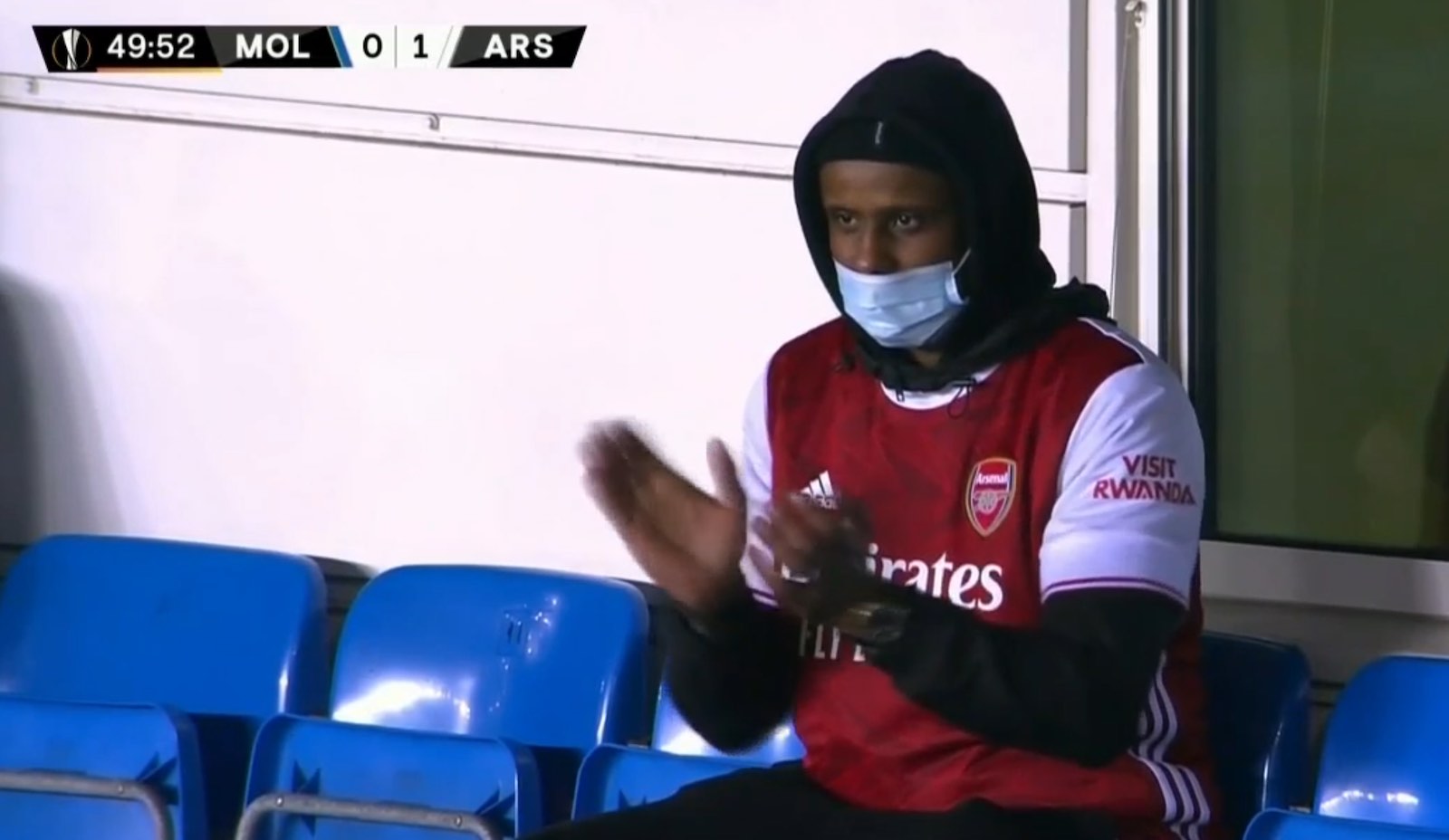 It wasn’t such a good night for …

Alexandre Lacazette: The kind of game you hope he might rekindle some kind of form, and while he did have a couple of good one-twos (with Nelson, I think), and played a nice flick in the build-up to the first goal, he generally looked way off the pace and his passing was poor at times. I don’t even think you can put it down to the role he was being asked to play, he just looks like someone with the weight of the world on his shoulders and the weight of Jan Molby in his legs.

Eddie Nketiah: On a night when his Academy pals did really well, he’ll rue that missed chance from the Pepe cross. Like Lacazette, it didn’t really go for him last night, and while there’s some comfort in the idea that he got into decent positions, strikers are judged on the chances they take or don’t.

The Molde lad who missed that chance in the first half: Not only did he miss the most open goal he’ll ever have in his life, he Phil Babbed his nuts on the post afterwards. For those of you who don’t remember Phil Babb, the former Irish international is now a world-renowned soprano (and not the gabagool kind):

Anyway, I was pleased to see Arsenal score three goals from open play, and my advice to Mikel Arteta and the players is to keep doing that. In fact, do it more often if at all possible. Here ends the tactical lesson.

We now start looking ahead to the Wolves game on Sunday, we’ll cover that on the site over the next couple of days and we’ll have a preview podcast over on Patreon later today.

For now, I’ll leave you with a brand new Arsecast, chatting about the Molde game with Andrew Allen, and then Diego Maradona with Tayo Popoola. All the links you need to listen/subscribe are below, enjoy!