“This is just sensational. Absolutely sensational. Just when Arsenal needed someone to lift it, when they needed a person to go out and say ‘I’m fed up with this, we’ve been defending far too much’, this little man produces this run, and at the end of this run, this finish.”

No, it was the commentary on Samir Nasri’s solo goal against Porto back in 2010. So far this season, the chances of hearing such commentary about an Arsenal goal has felt like a distant pipe dream. Seriously, can you imagine someone producing such a spectacular run in this Arsenal side? Not Aubameyang, not Willian, not Lacazette.

But that changed on Boxing Day. After seven Premier League games without even taking the lead, Mikel Arteta completely changed his attacking midfield trio. Emile Smith Rowe and Gabriel Martinelli came in for their first Premier League starts of the season, while Bukayo Saka played on the right from the start for the first time in this campaign. 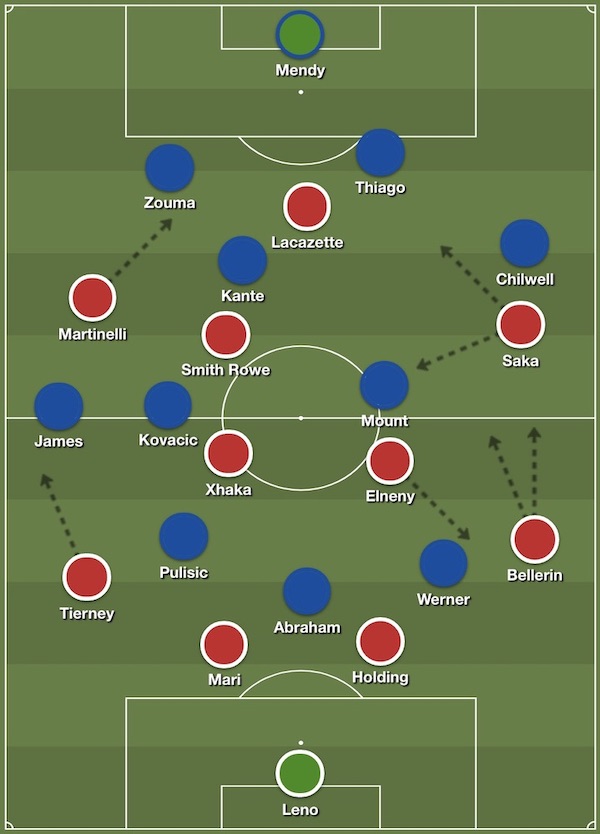 Arsenal took the lead for the first time in eight Premier League games, then added two more before a nervy ending flattered the Blues.

A glance at expected goals suggests Chelsea were unlucky but the Blues had 0 shots on target by the 75th minute and managed about 1.5 of their 2.4 expected goals (according to Scott Willis’ model) with two shots late on – their goal and the Jorginho penalty saved by Bernd Leno

Mikel Arteta scaled back on his methodical approach, played a younger side, and was rewarded with a more free-flowing performance that exposed Frank Lampard’s team. It was particularly pleasing to see three different aspects of Arsenal’s play lead to the three goals against Chelsea to end a dismal run.

As pointed out on Match of the Day (and perhaps elsewhere), Arsenal managed to get Hector Bellerin and Kieran Tierney into dangerous spaces frequently in the first half.

What wasn’t mentioned, at least by that analysis, was the importance of Bukayo Saka and Emile Smith Rowe in the half-spaces to make this happen. The two Hale End graduates would pop up either side of Chelsea holding midfielder N’Golo Kante, forcing Chelsea players into decisions. Does a midfielder drop in alongside Kante, taking away Chelsea’s ability to press? 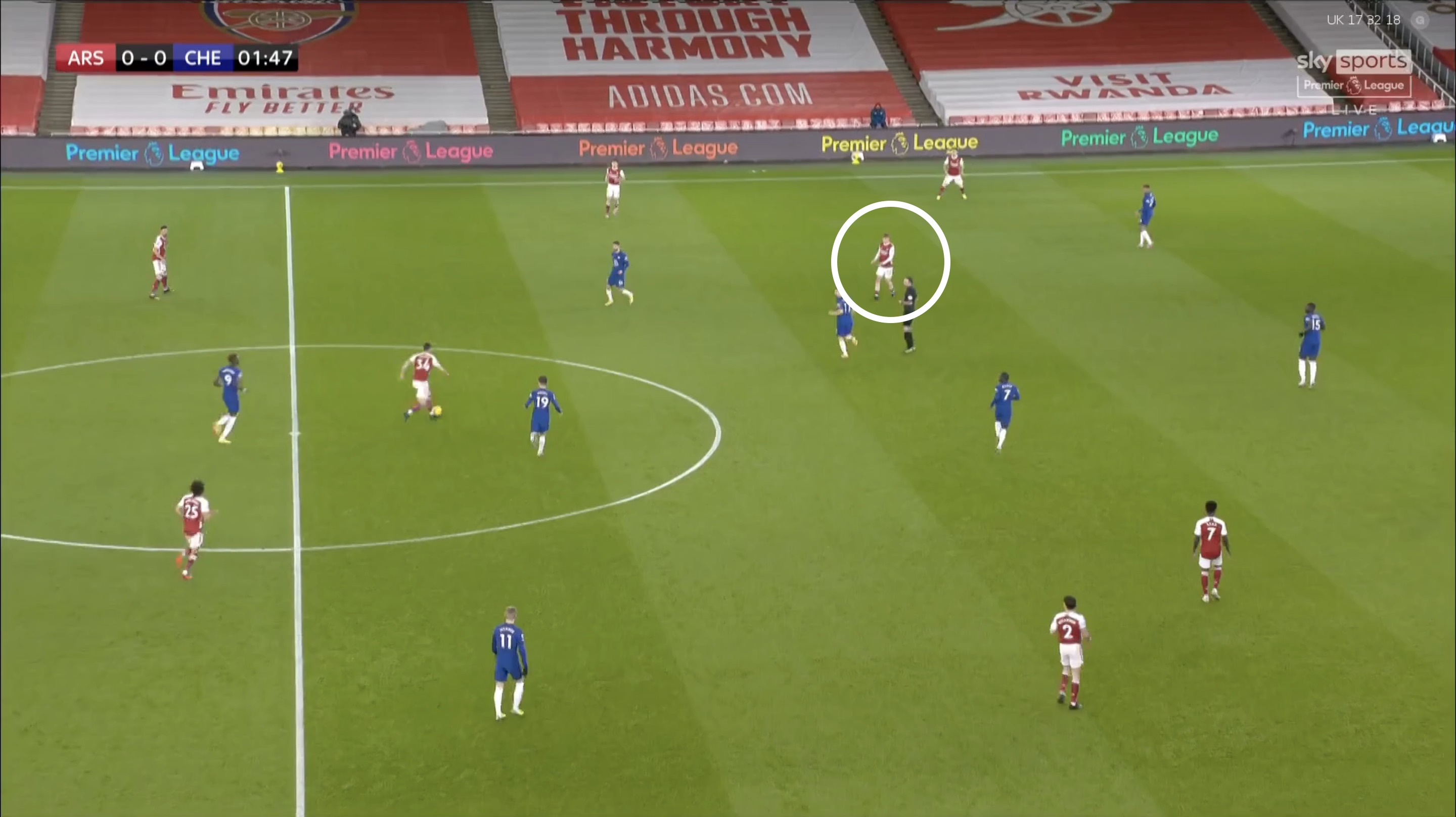 Does a defender tuck in narrower or push out of the backline, so Kante isn’t outnumbered and Kovacic doesn’t have to drop in? Maybe, but if so, that just opened up the channel for the Arsenal fullback to burst in behind if he hadn’t been tracked doggedly enough. This Xhaka pass to Tierney was a sign of things to come as Smith Rowe’s positioning to the left and Martinelli’s movement inside pinned Reece James in the centre of the pitch. 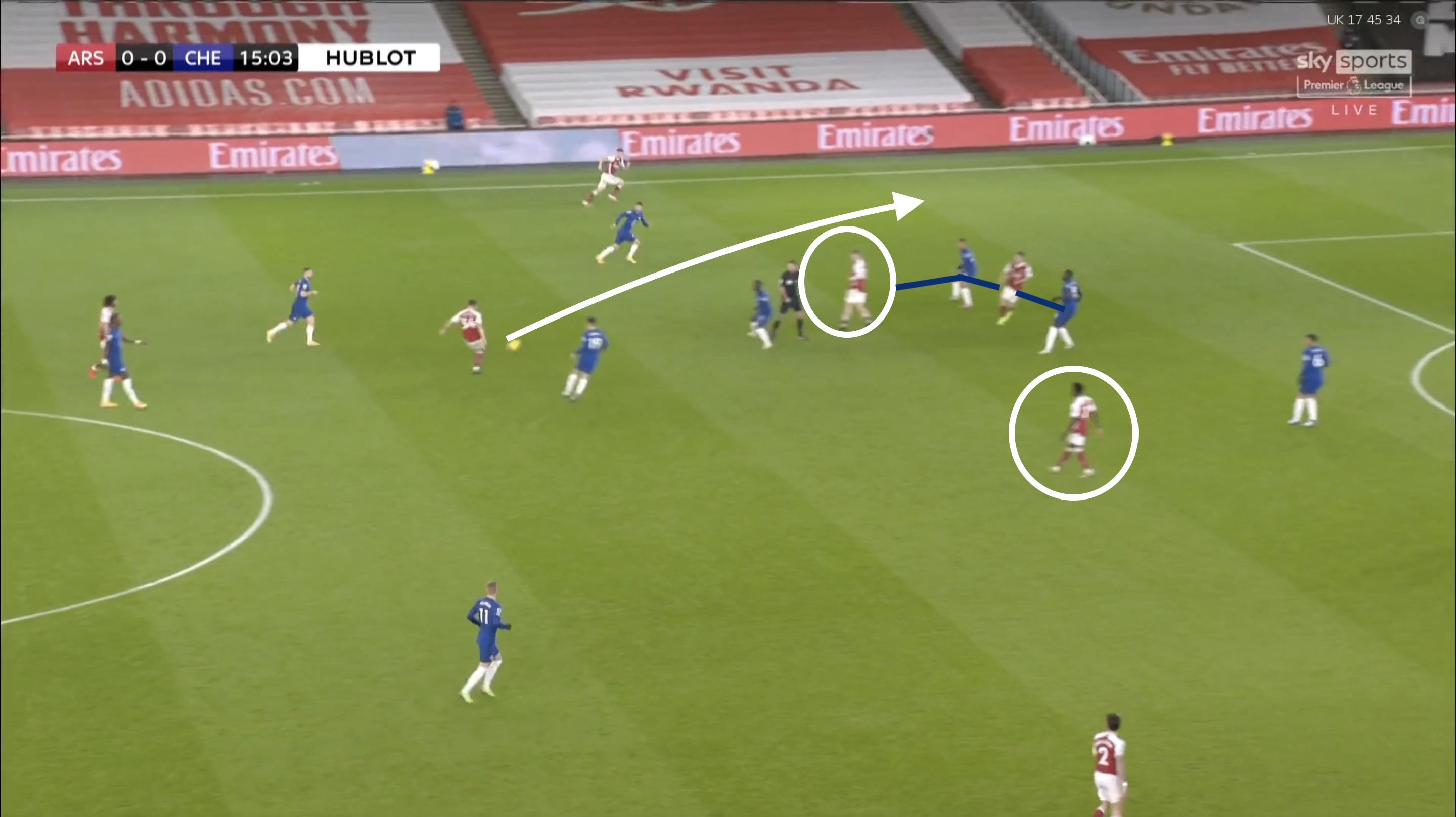 Saka is narrow on the other side, with Timo Werner not even close to tracking Bellerin. Sometimes, like the image above, that wasn’t a big deal, because Chilwell hadn’t followed Saka inside. But sometimes he did and Bellerin took advantage. 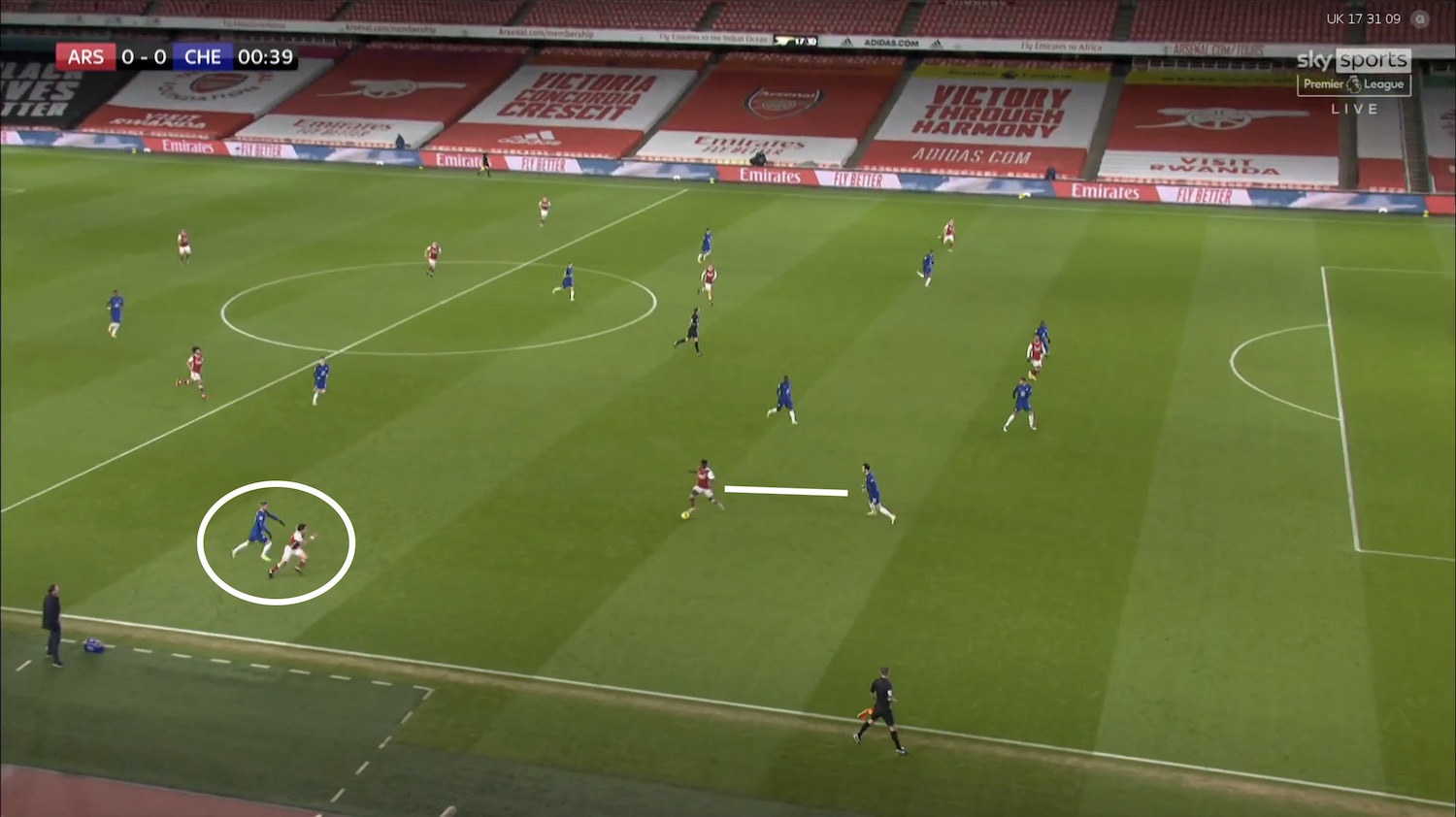 Werner was, at times, switched off defensively, like in the first minute in the image above. And sometimes, like in the image below, he was dragged out by Mohamed Elneny’s positioning (out of picture) wide of the centre-backs as Arsenal built up from defence, all while Saka and Smith Rowe consistently flanked Kante to force Chelsea to adapt. 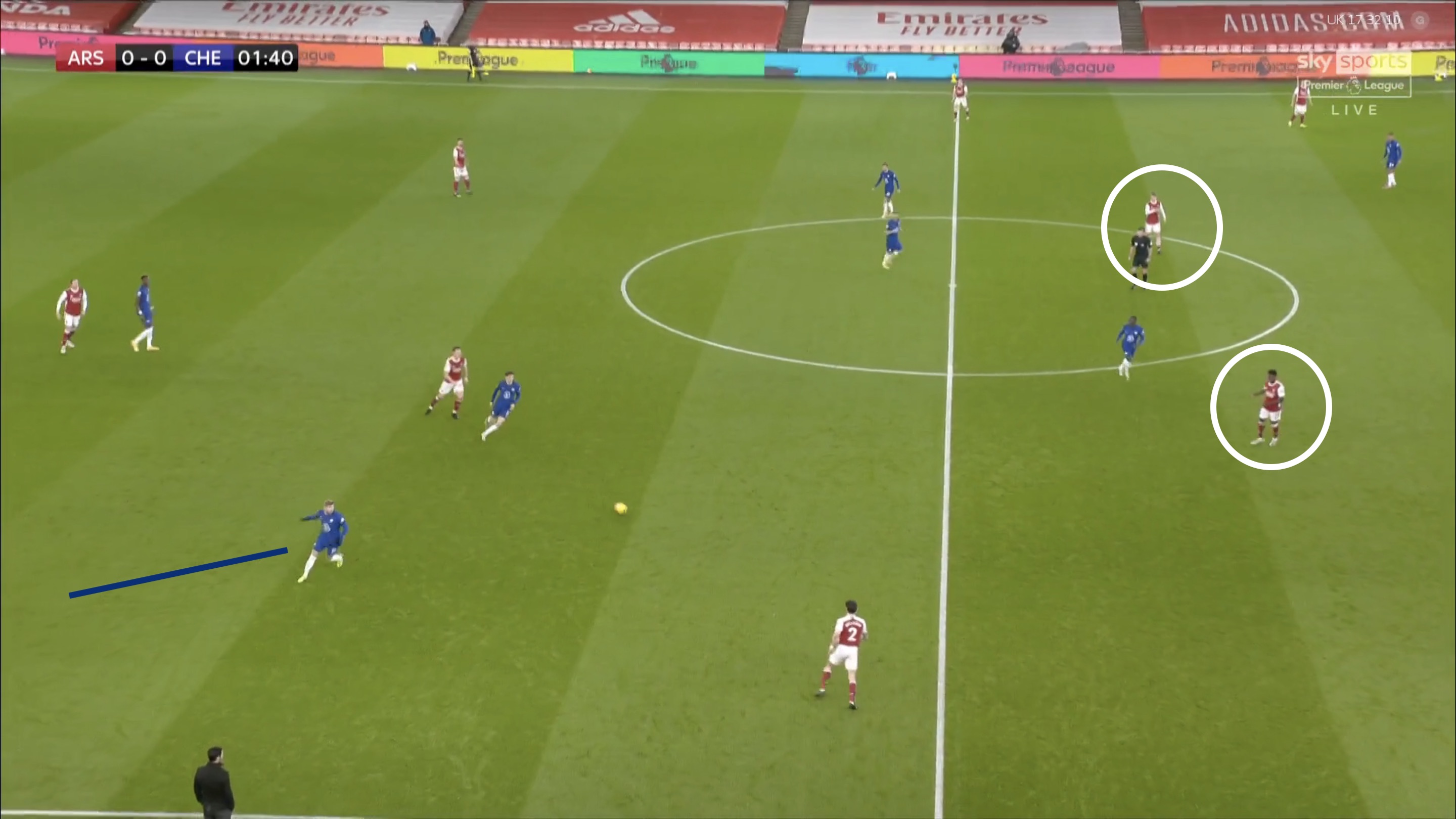 The most dangerous moments for Arsenal came on the left, where Tierney would burst outside Martinelli. The Brazilian is predisposed to moving central and attacking the goal anyway, while Smith Rowe’s positioning to the left in the ’10 space’ caused Kante, Kovacic, and James all to question who should be picking him up.

This is something that has been lacking from Arsenal’s game, as pointed out towards the end of this column after the Wolves game.

Tierney repeated found that space outside on the left and it ultimately led to him winning a penalty for the opening goal. As Chelsea failed to organise from a corner, Smith Rowe and Saka again drifted into their half-space positions, and Xhaka again found the Arsenal left-back ready and willing to move into the space it afforded him. 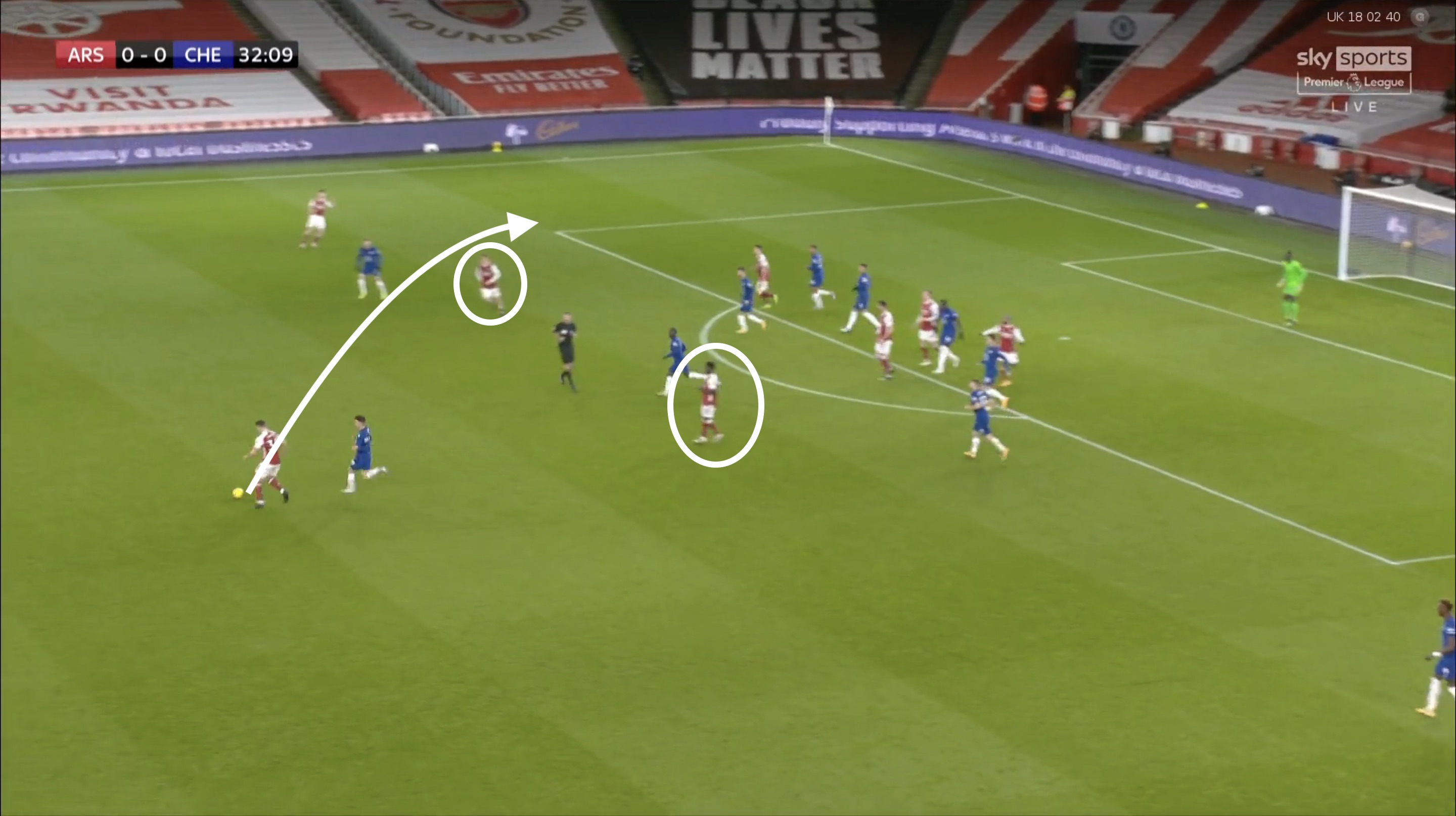 Tierney won a penalty, Lacazette converted. 1-0 to The Arsenal.

Arsenal pressured a Chelsea player on the ball in their own third 42 times during the game, a high for the Gunners in the Premier League so far this season. By the end of the game, Chelsea had completed fewer short passes than in all but one (v Leeds) of their 15 games so far in 2020/21.

After playing passively for weeks, especially in big games, it felt like the shackles were loosened a little bit and Arsenal were encouraged to hound a Chelsea side both determined to play out from the back but also too basic to find variations to work through Arsenal’s man-marking system.

As opposed to the 3-4-3, where the Arsenal centre-forward blocks passes into midfield, this Arsenal 4-2-3-1 saw the ostensible attacking midfielder take on that job. It immediately moved Arsenal upfield and made the side more aggressive, with the striker (Lacazette on Saturday) freed up to press the centre-backs. 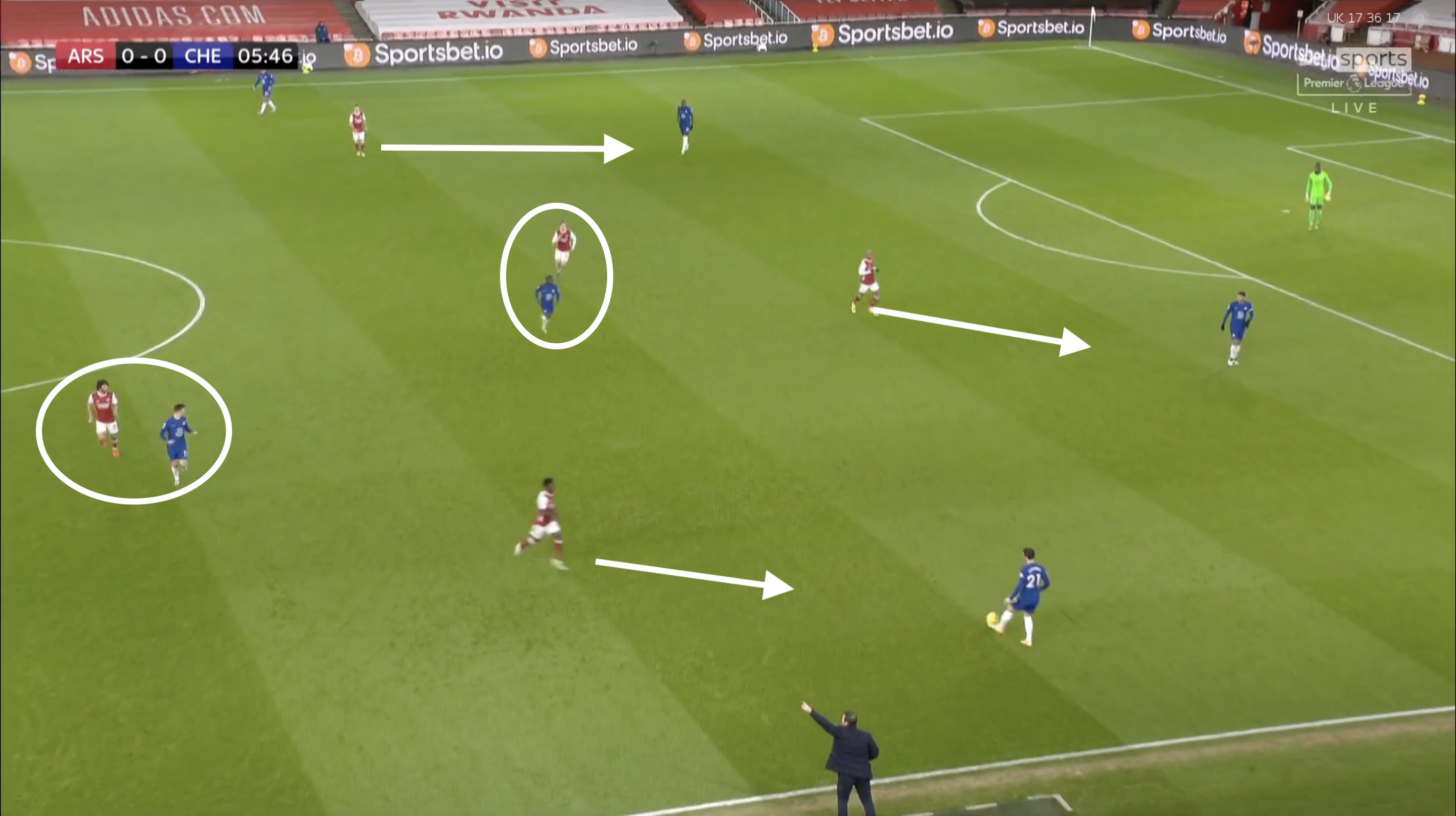 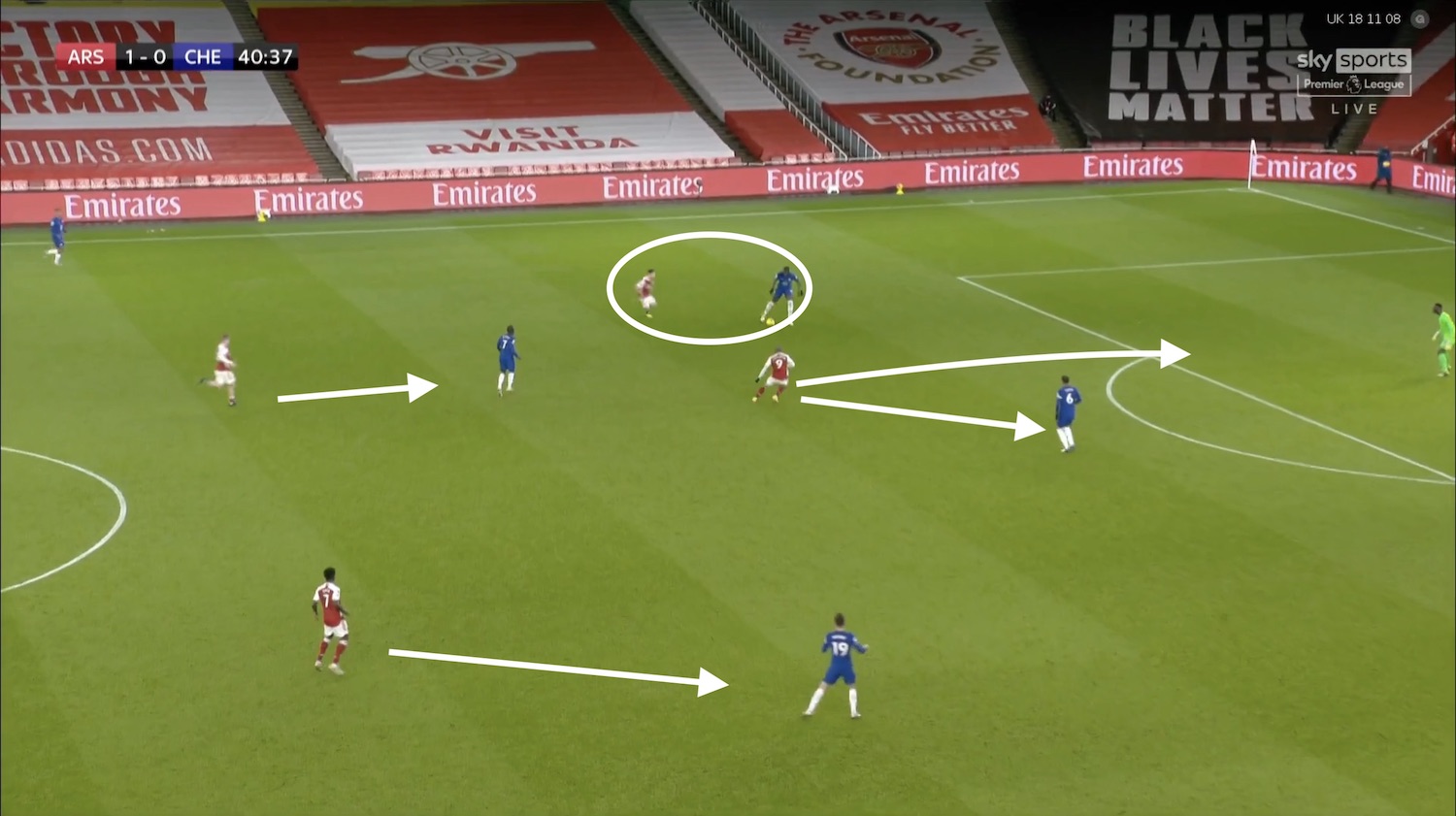 Chelsea looked unsettled with the ball at the back, rushed into decisions and unable to shake off their markers, and a better side would have found James more regularly as Martinelli pressed Zouma, as above. Though he should’ve been their go-to out ball, the Blues didn’t do enough to find him. 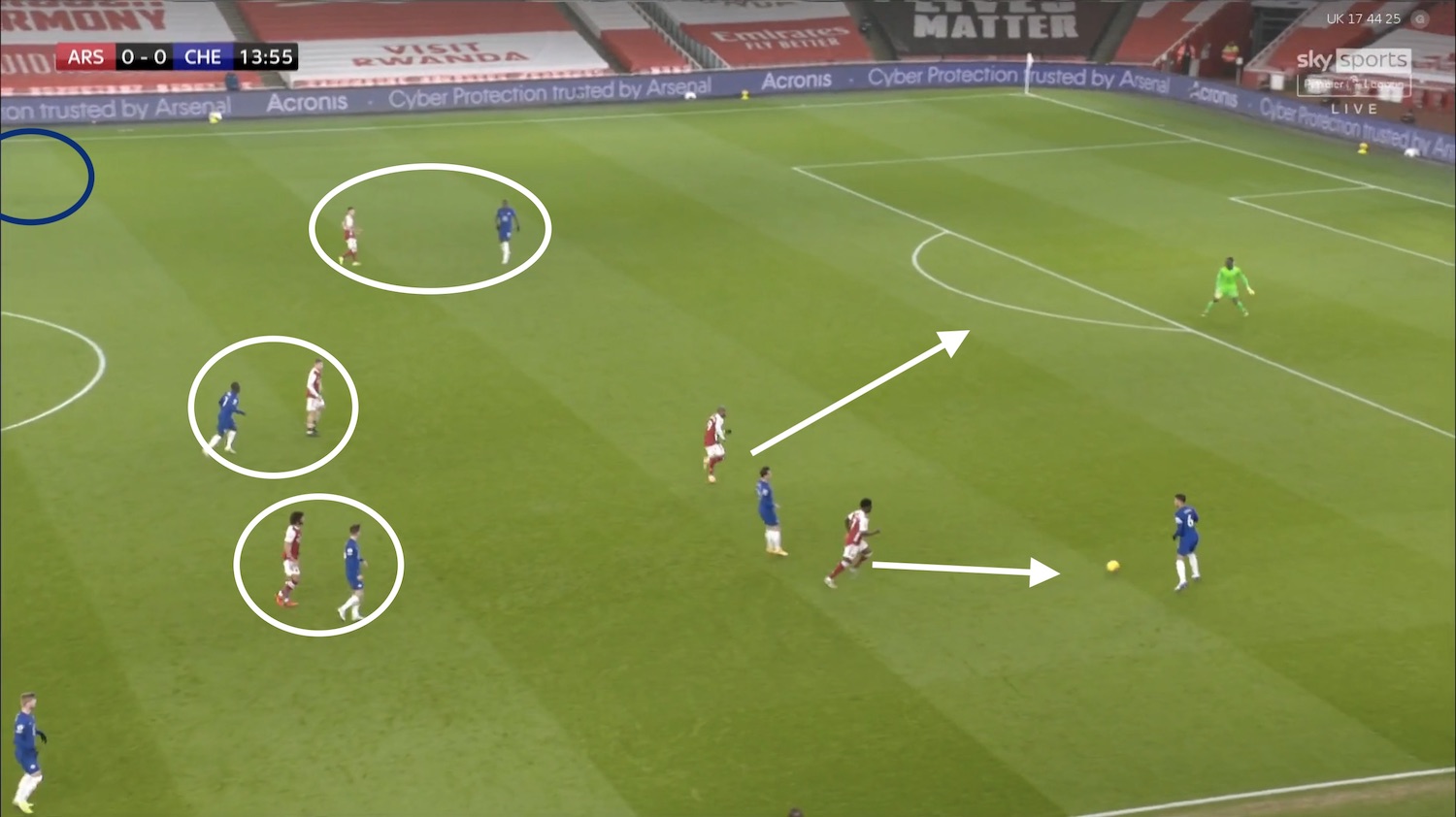 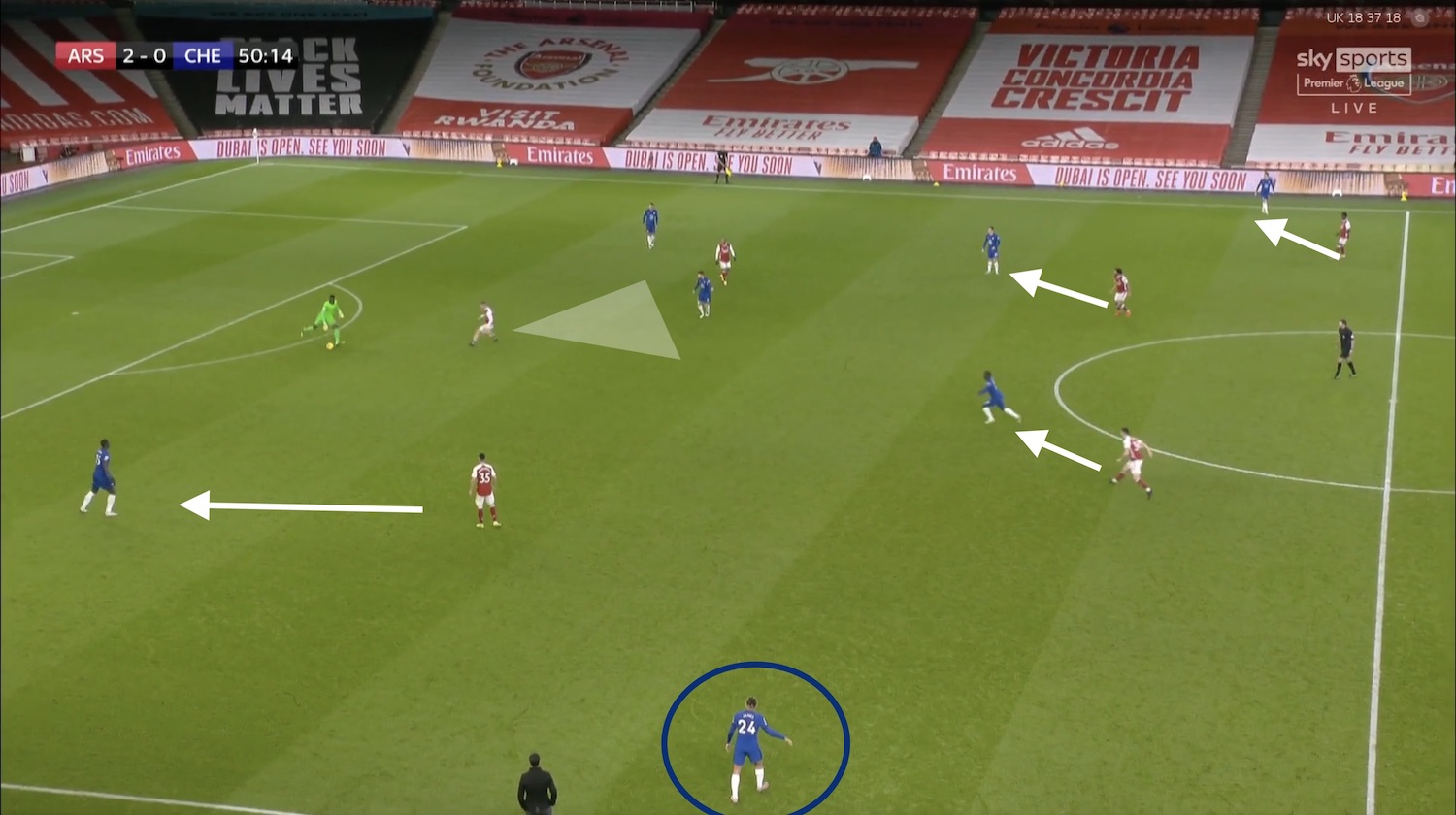 The youngster’s performance deserved a goal and he almost got one as one of Arsenal’s aggressive approach nearly paid off when Thiago Silva slipped.

Pressing high doesn’t just help you force turnovers, but leaves you with players ready to hurt the opposition if they do give the ball away. It was refreshing to see Martinelli and Smith Rowe drive into the area when such an opportunity arose, even if the latter was unlucky not to get on the end of Hector Bellerin’s cutback. 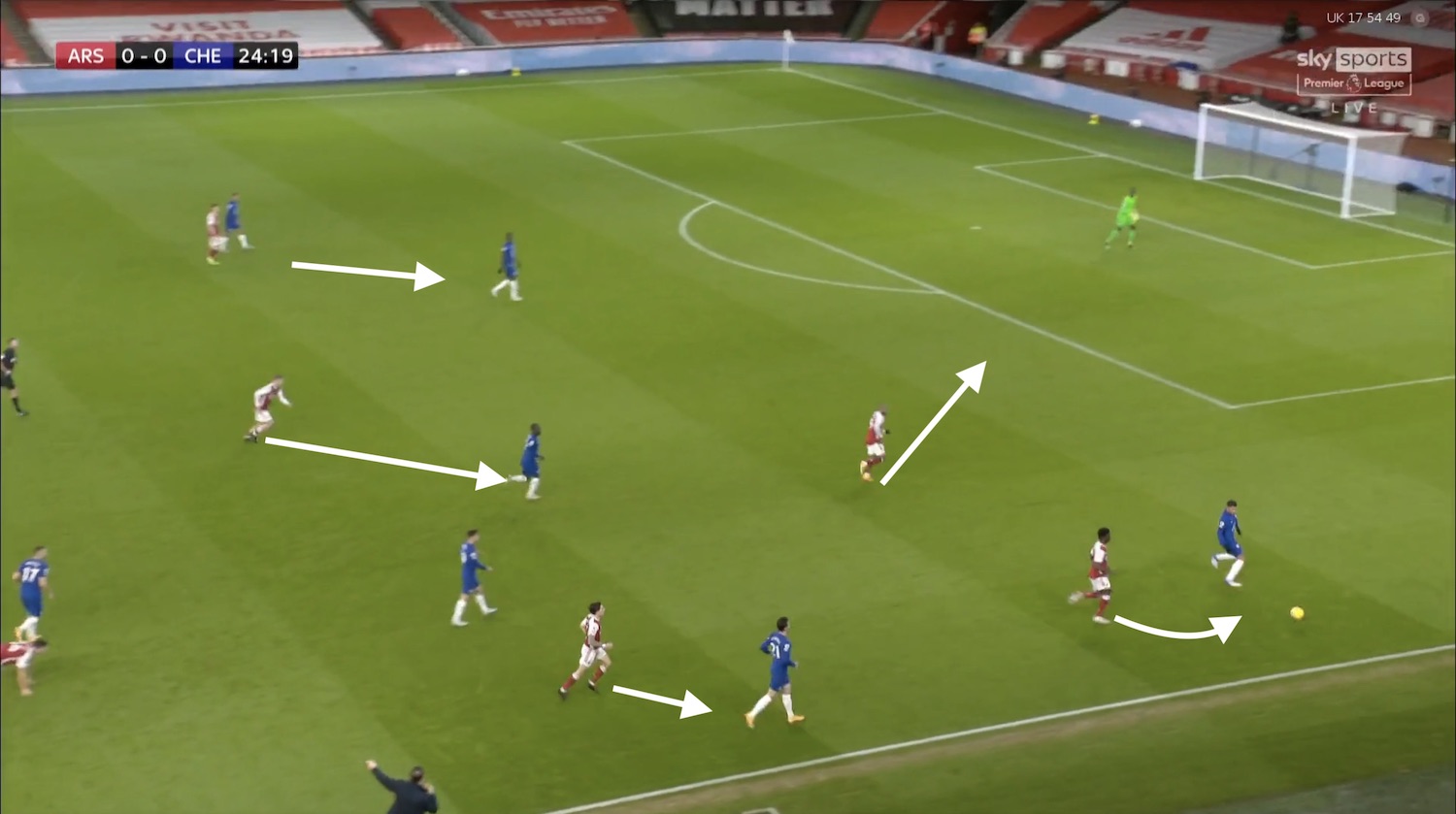 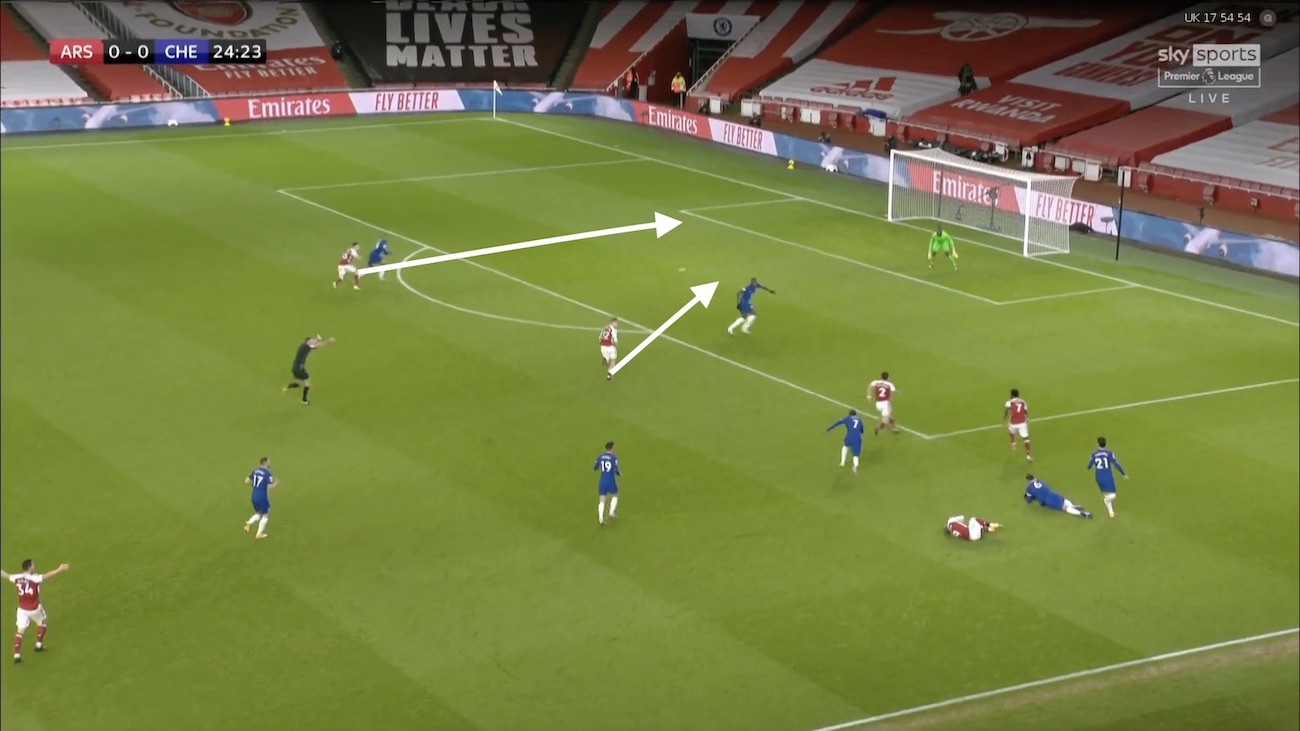 It wasn’t just a hunger for goals that drove this run. Smith Rowe had this energy all over the pitch. The urgency to press mistakes was a huge boost to the team’s play and a more aggressive shape left players in better positions to counter-press errors, with the Englishman in particular showing real energy and desire to pounce on loose balls. 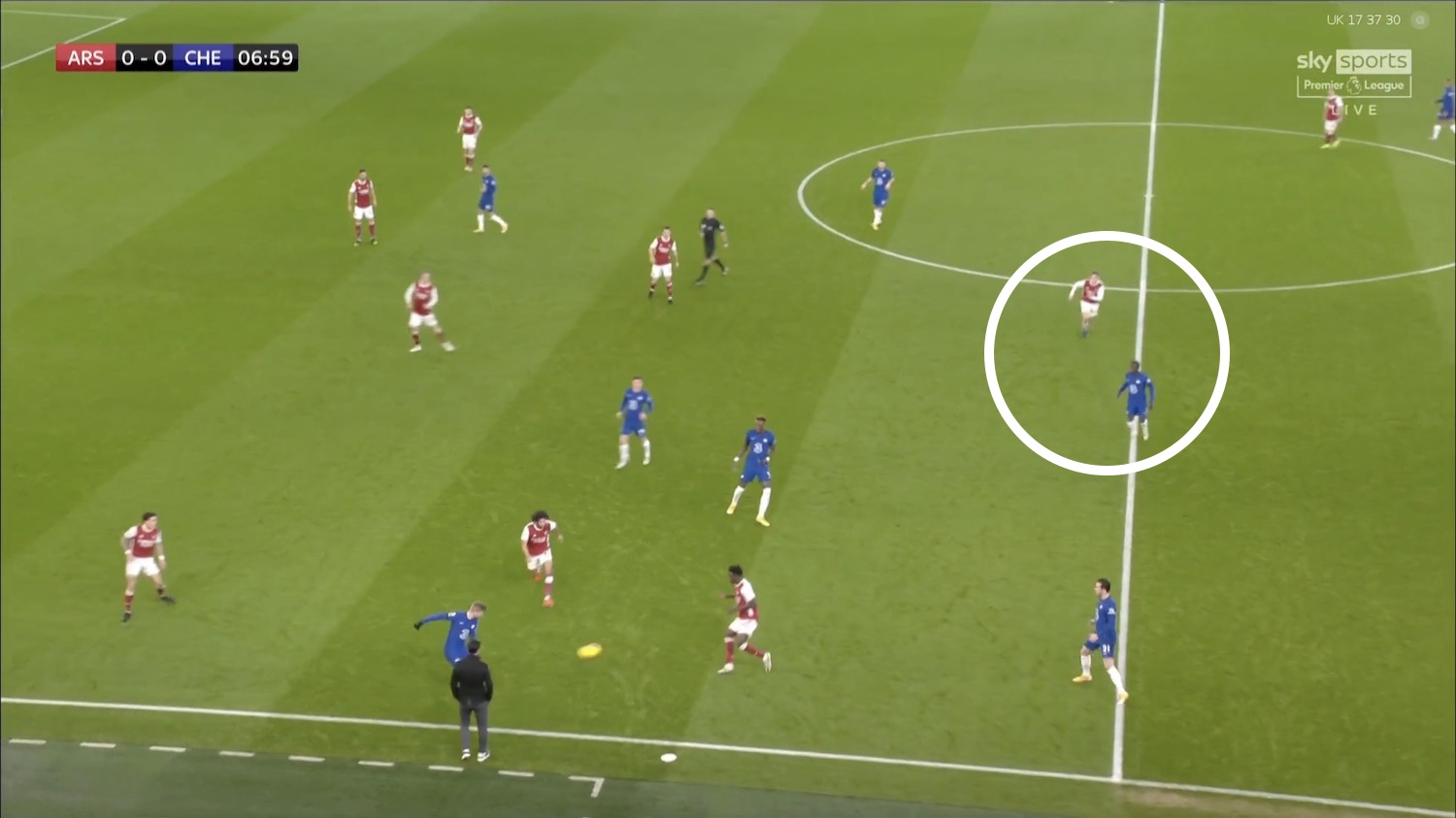 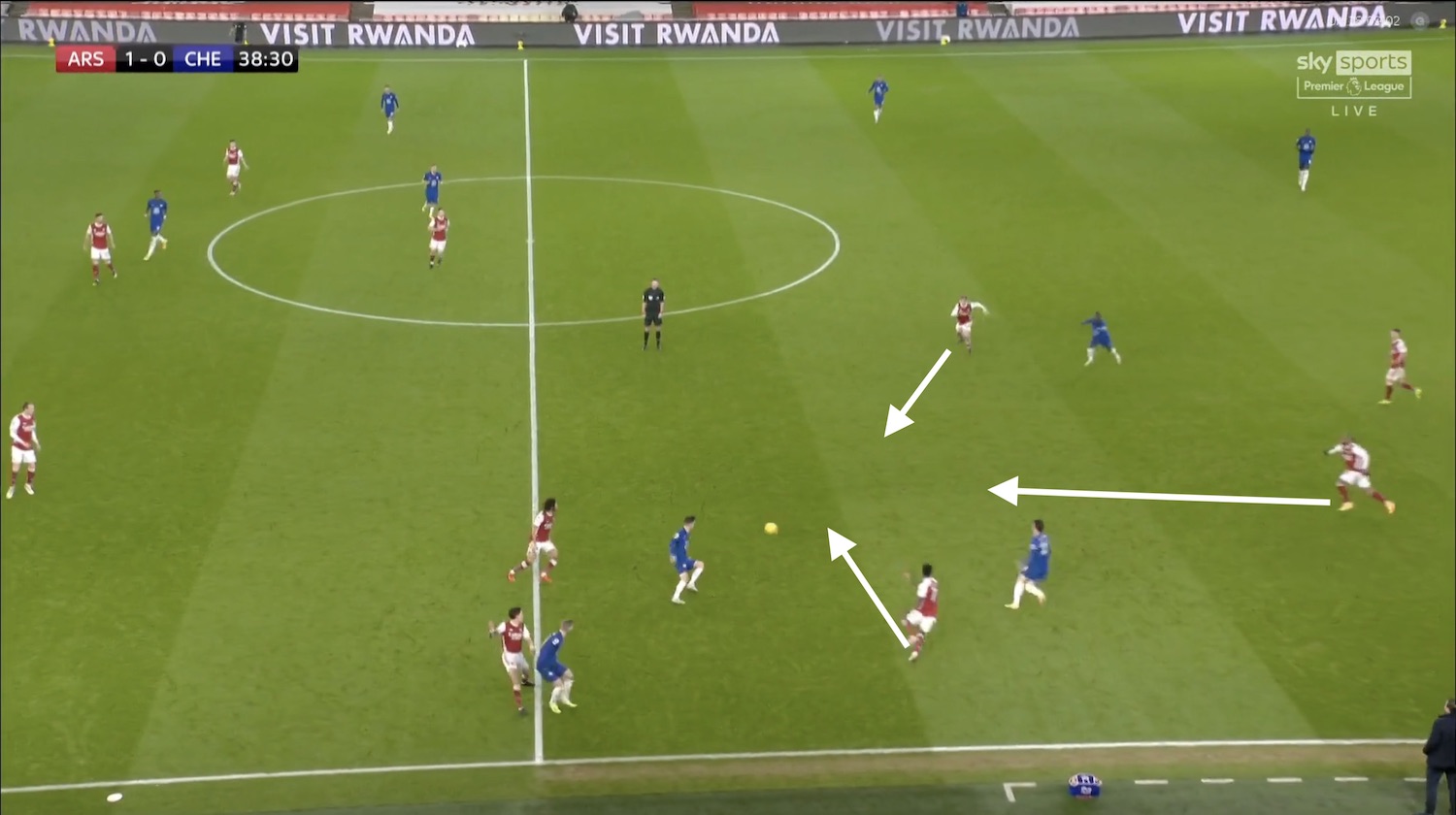 It was a different side of Smith Rowe’s game that lead to the second goal. If all that pressing looks energetic and emotional, he showed a cool head too. With Arsenal trying to keep on top of Chelsea and Smith Rowe pulled away from Kante for a moment, he urged Granit Xhaka to take his place, swapping positions with the Swiss.

Martinelli and Smith Rowe brought energy to the side, yes, but they didn’t do it at the expense of sensible, considered play. 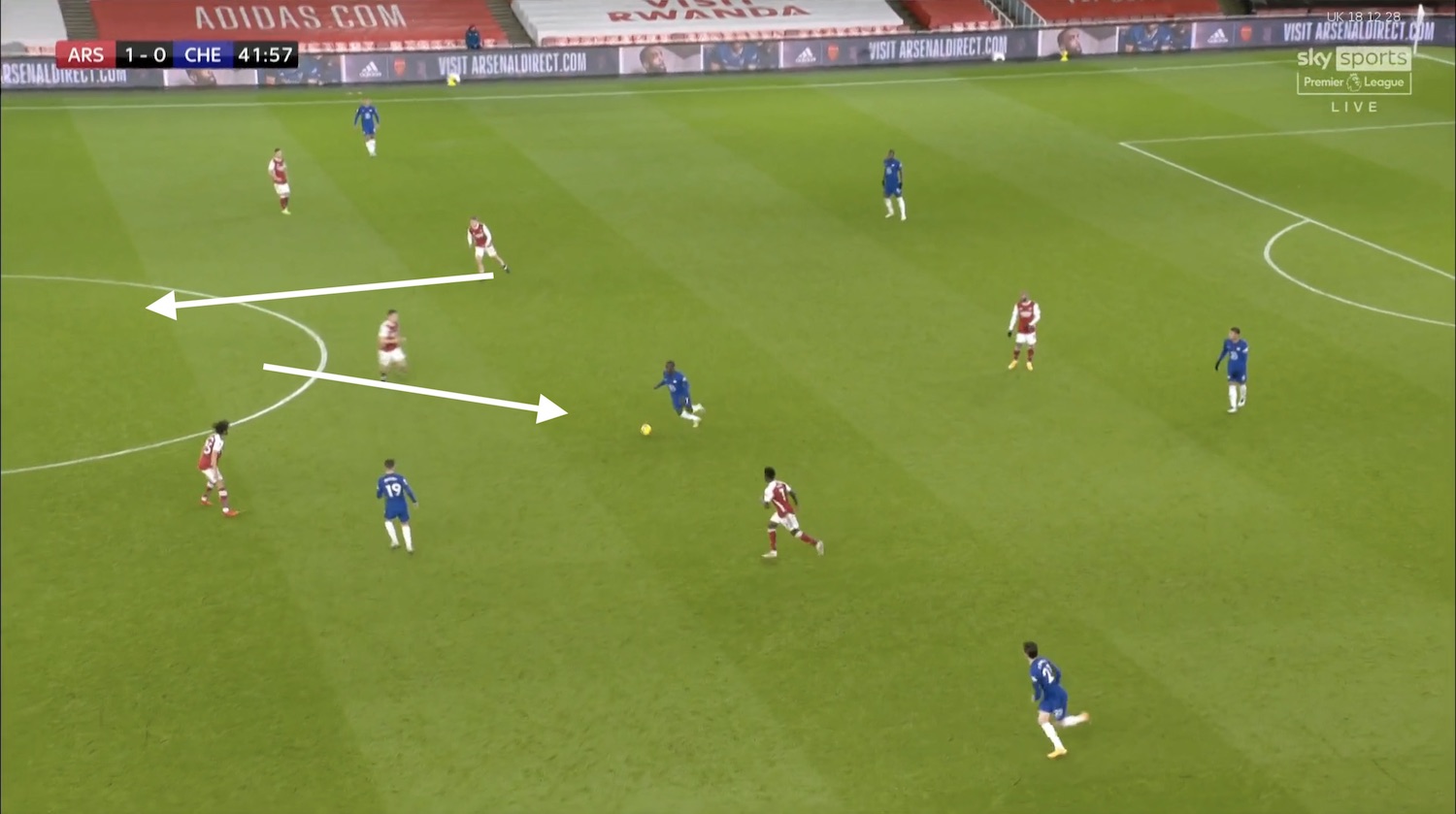 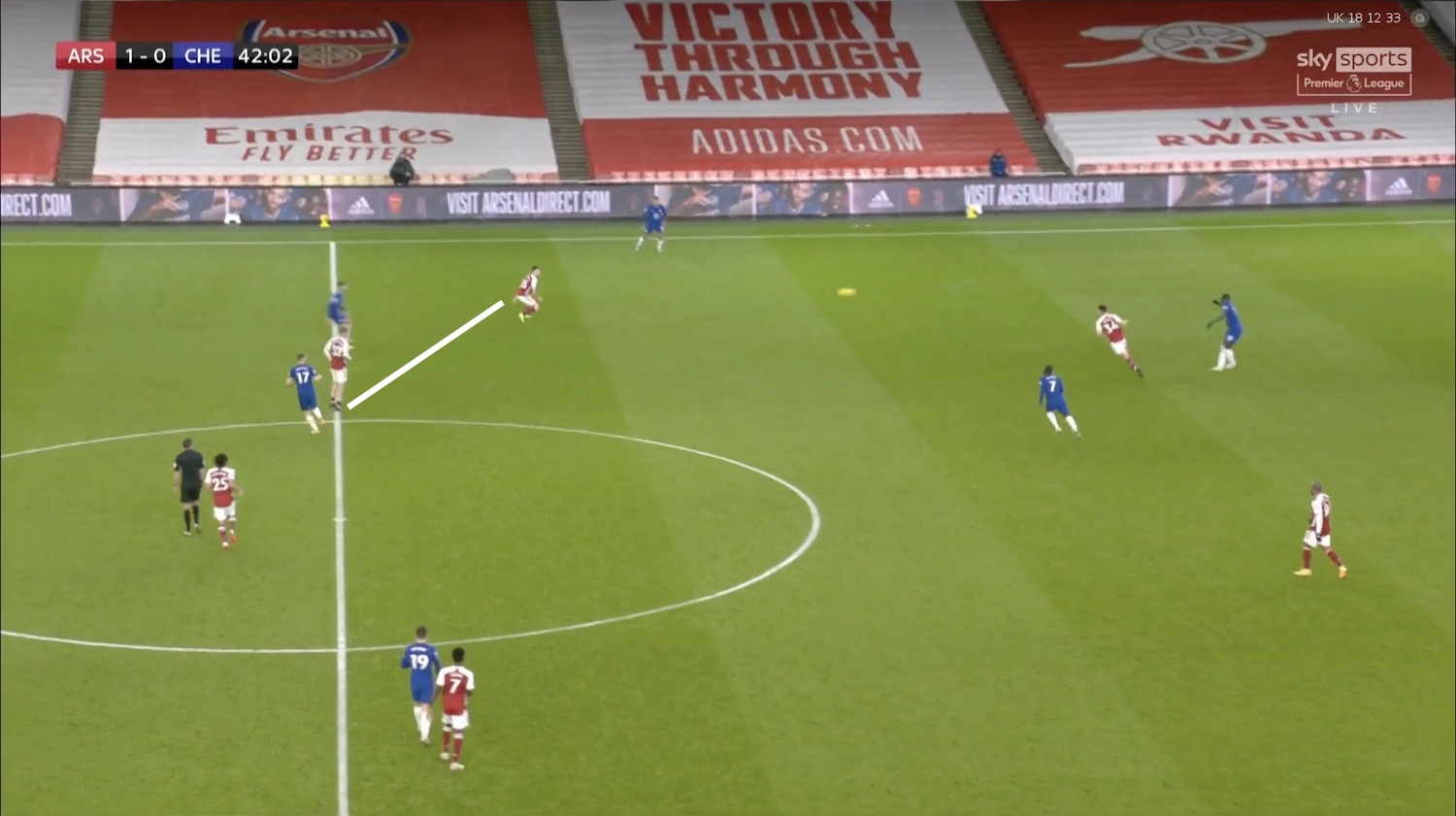 Moments later, Martinelli cut out a risky Chelsea pass, and he and Smith Rowe combined to take back possession. Chelsea didn’t touch the ball again until they were two behind. Just 10 passes after Arsenal won possession, Saka, again central as Bellerin ran outside him, won a free-kick.

The headline difference to the team was, of course, those three players lining up behind Alexandre Lacazette. And they more than left their mark.

All too often this season, Arsenal have lacked any sort of presence in the ‘number 10’ space, with attacks being funneled out wide. During their winless run, the team became increasingly reliant on crosses as a lack of imagination as good as leapt out of the TV and slapped fans across the face.

In absolute relative terms probably a 7/10 performance from Smith Rowe but he just jumps off the screen because he does things none of our other players do.

Not only was Smith Rowe willing and able to find and move into spaces between the lines, unmarked, but he was decisive when the ball came to him, taking the ball on the turn and immediately looking to burst into space or play a forward pass. 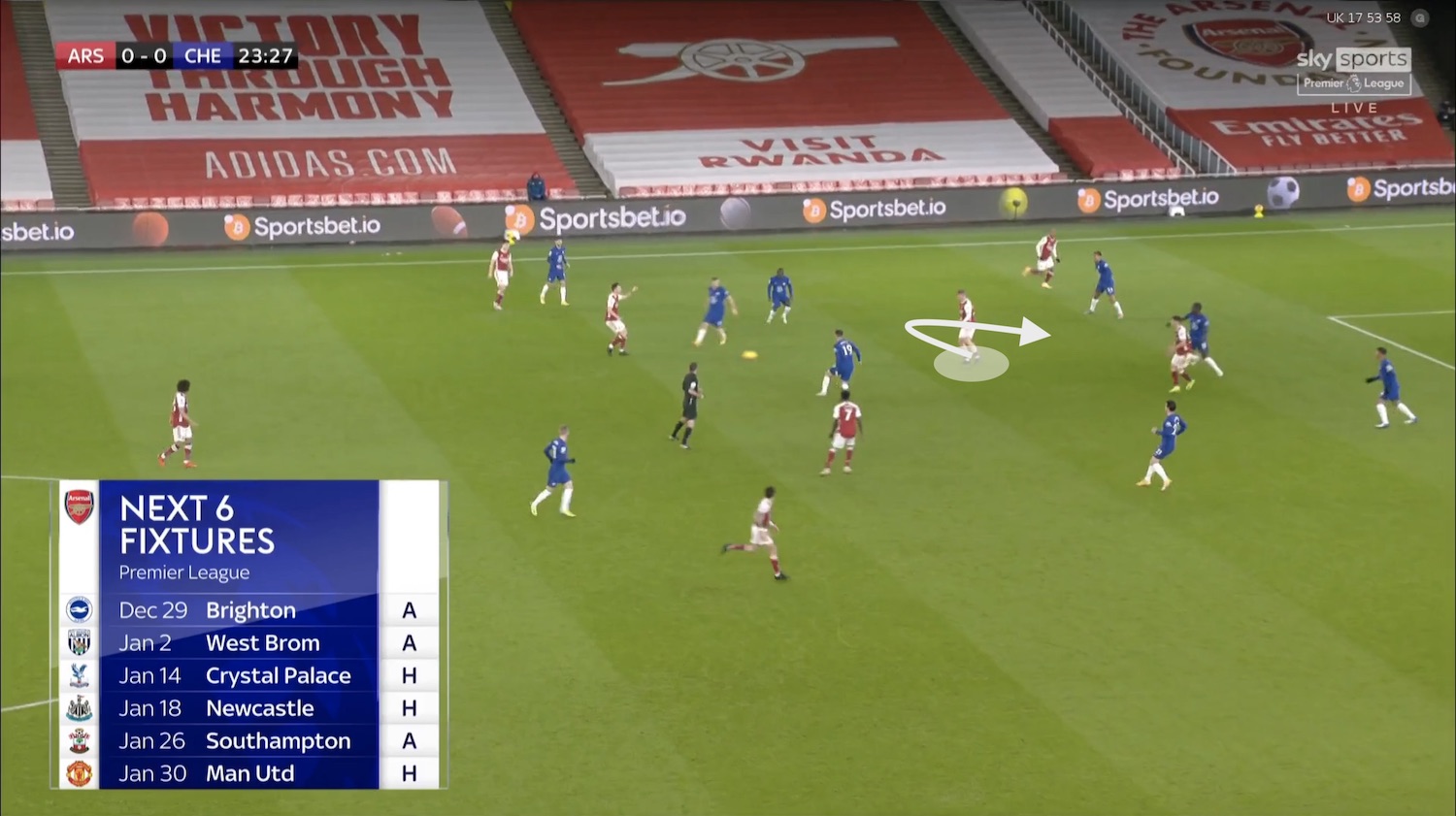 Arsenal attackers haven’t been good enough at moving away from the ball, stretching opposition teams, dragging them out of position. It sounds so simple but it’s something that has sorely been lacking.

On Saturday, though, Smith Rowe and Martinelli added plenty of it, and were a huge threat too as they ran off their team-mates, providing some depth to the side and pushing Chelsea back. Finally, some Arsenal players who aren’t only looking to have the ball arrive at their feet. 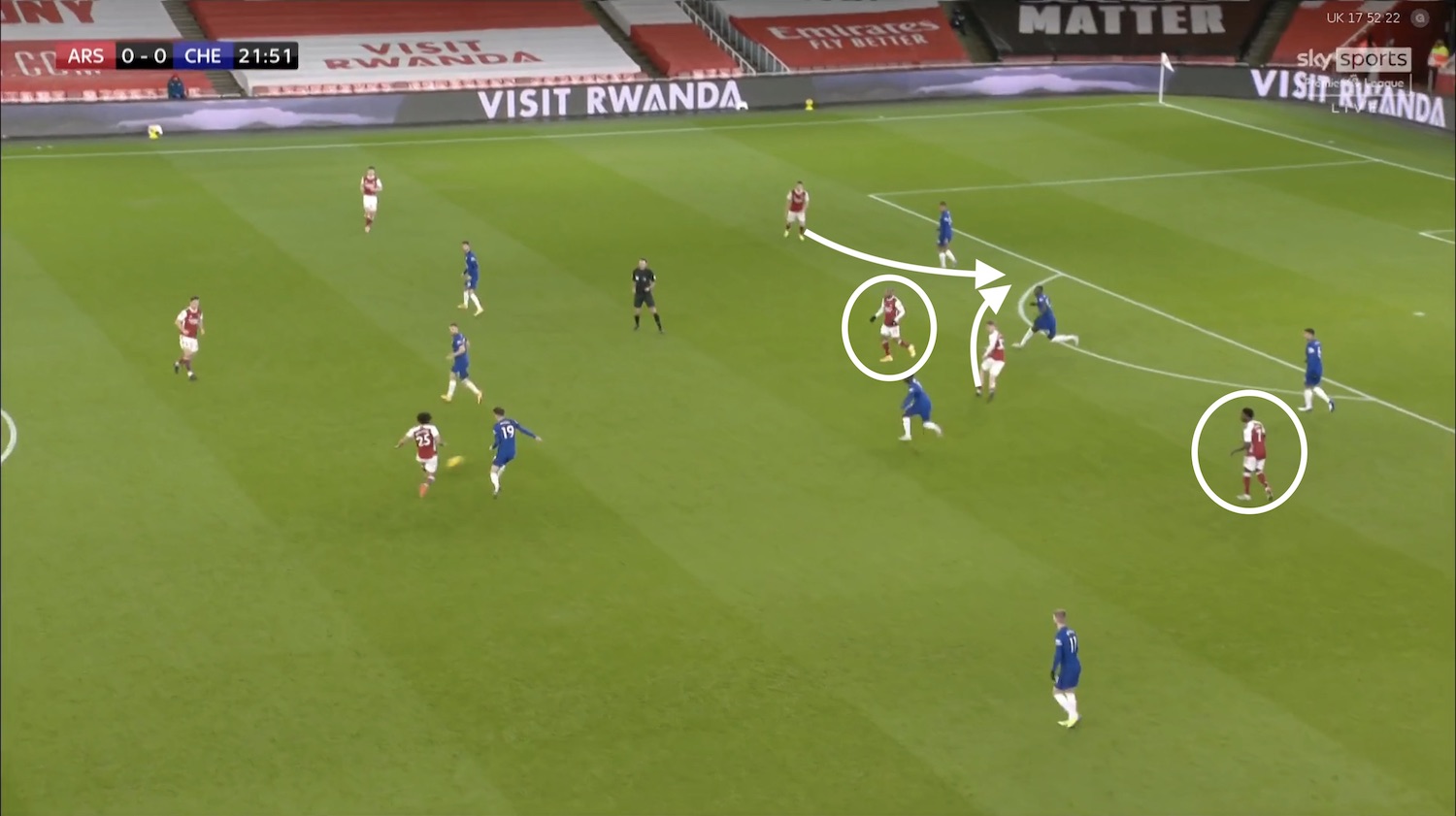 When combined with some smart combination play, this Arsenal side showed more fluidity and threat in attack than they have all season. Like here, when Smith Rowe bursts down the left behind James and then plays a one-two with Saka. 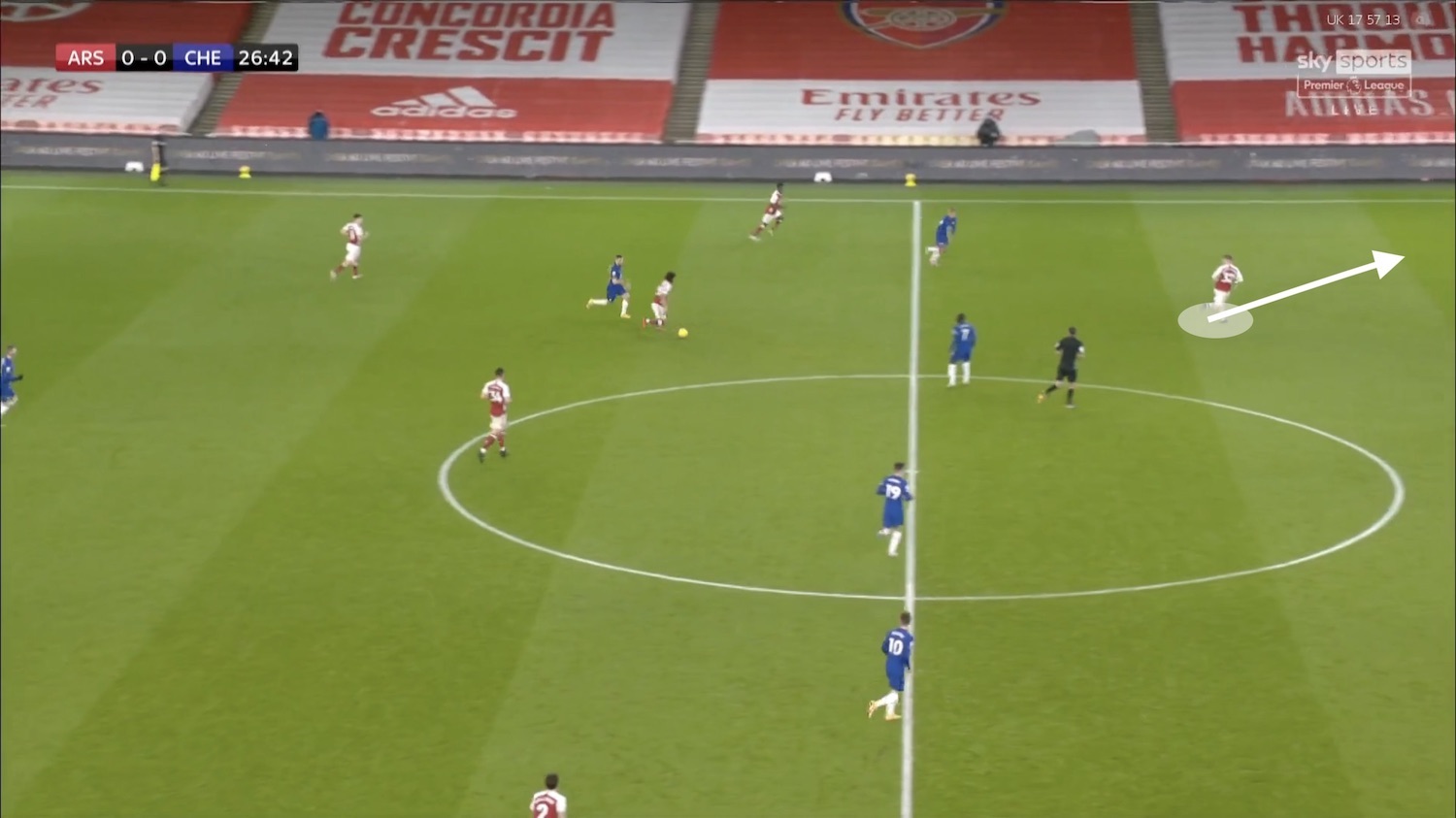 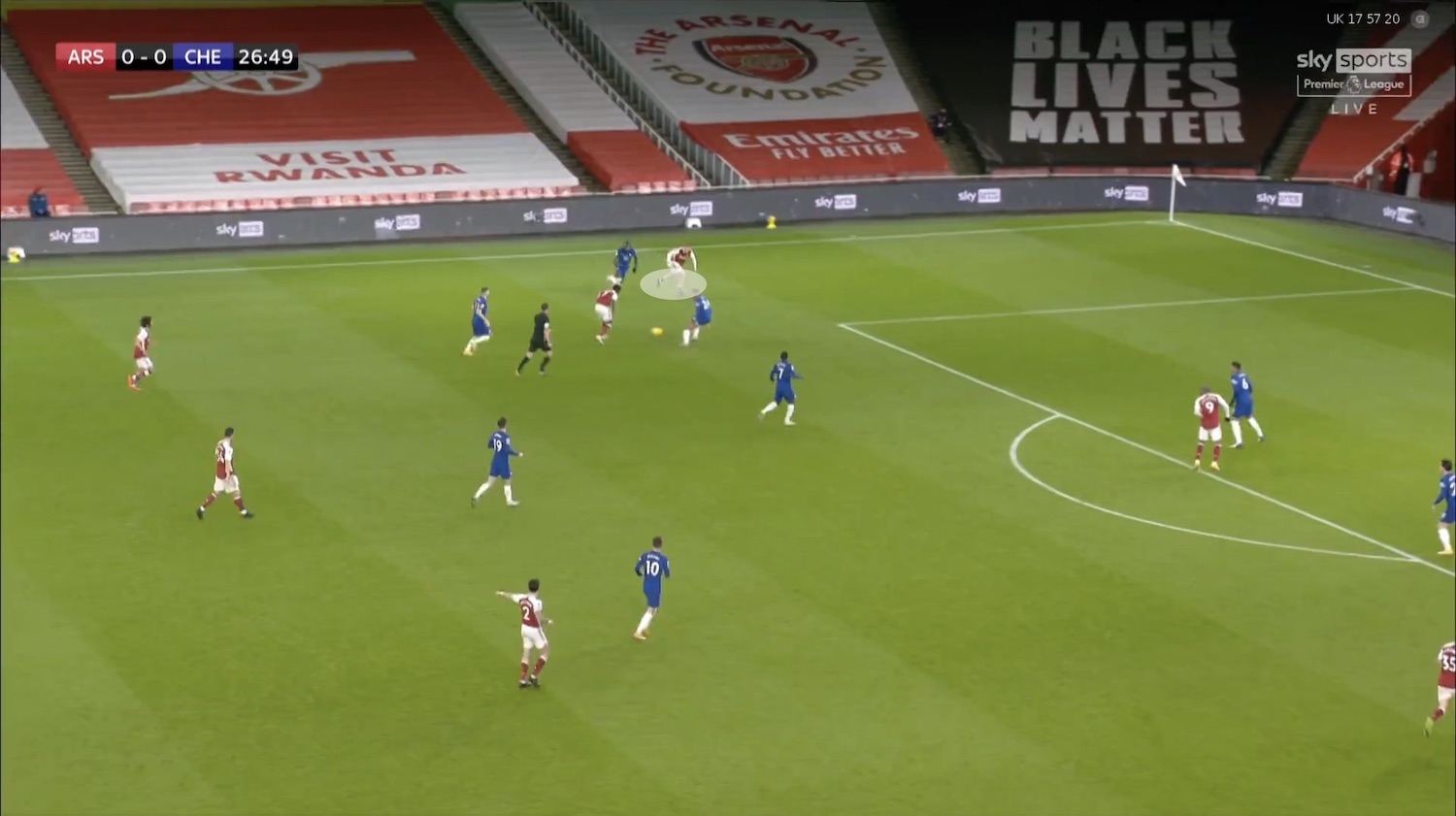 Or here, when the same duo combine to release Martinelli behind the Chelsea backline. 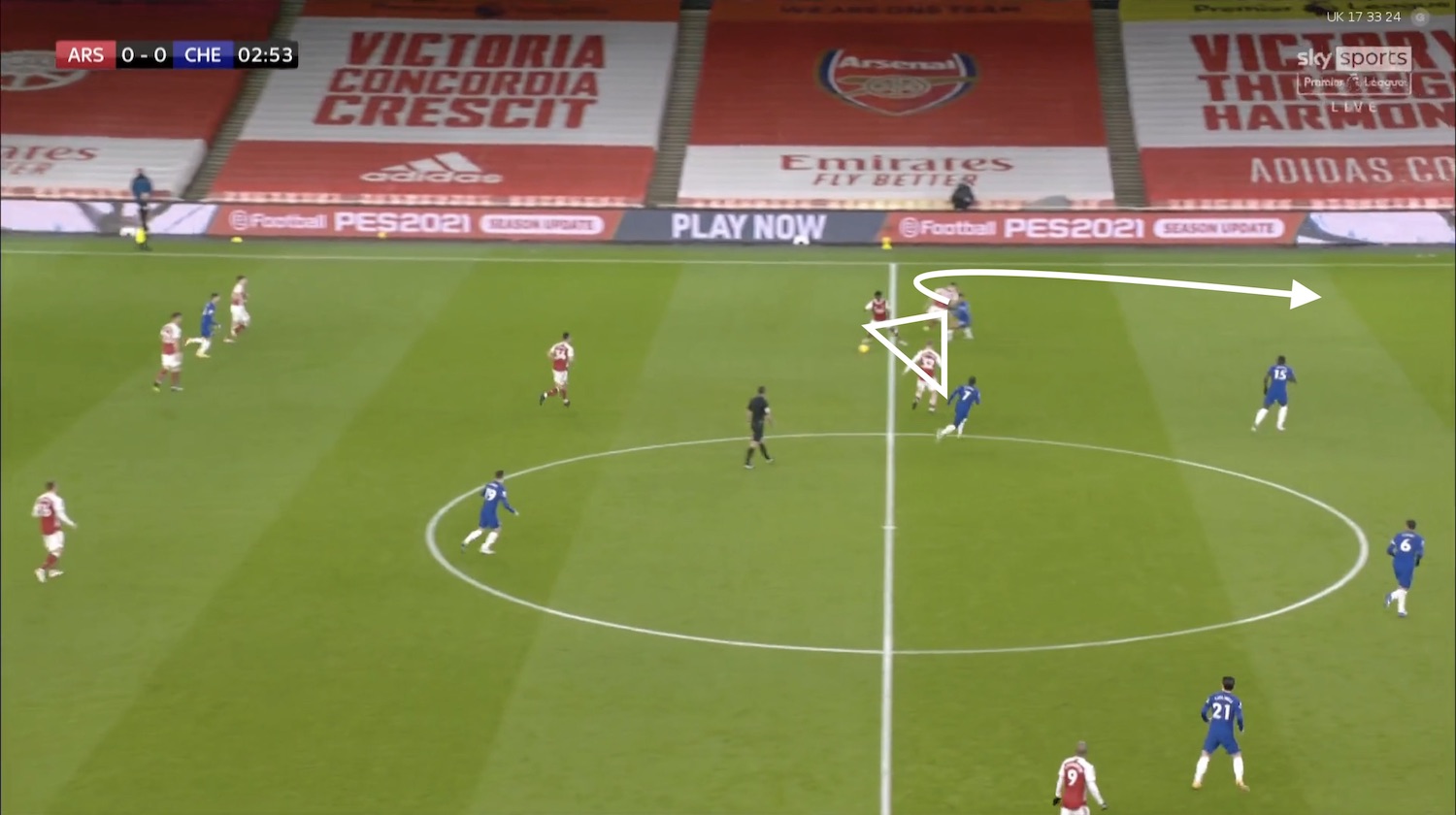 Or dropped in off the frontline, dragging Chelsea’s line high, so Pablo Mari could play a long ball in behind for the Brazilian. 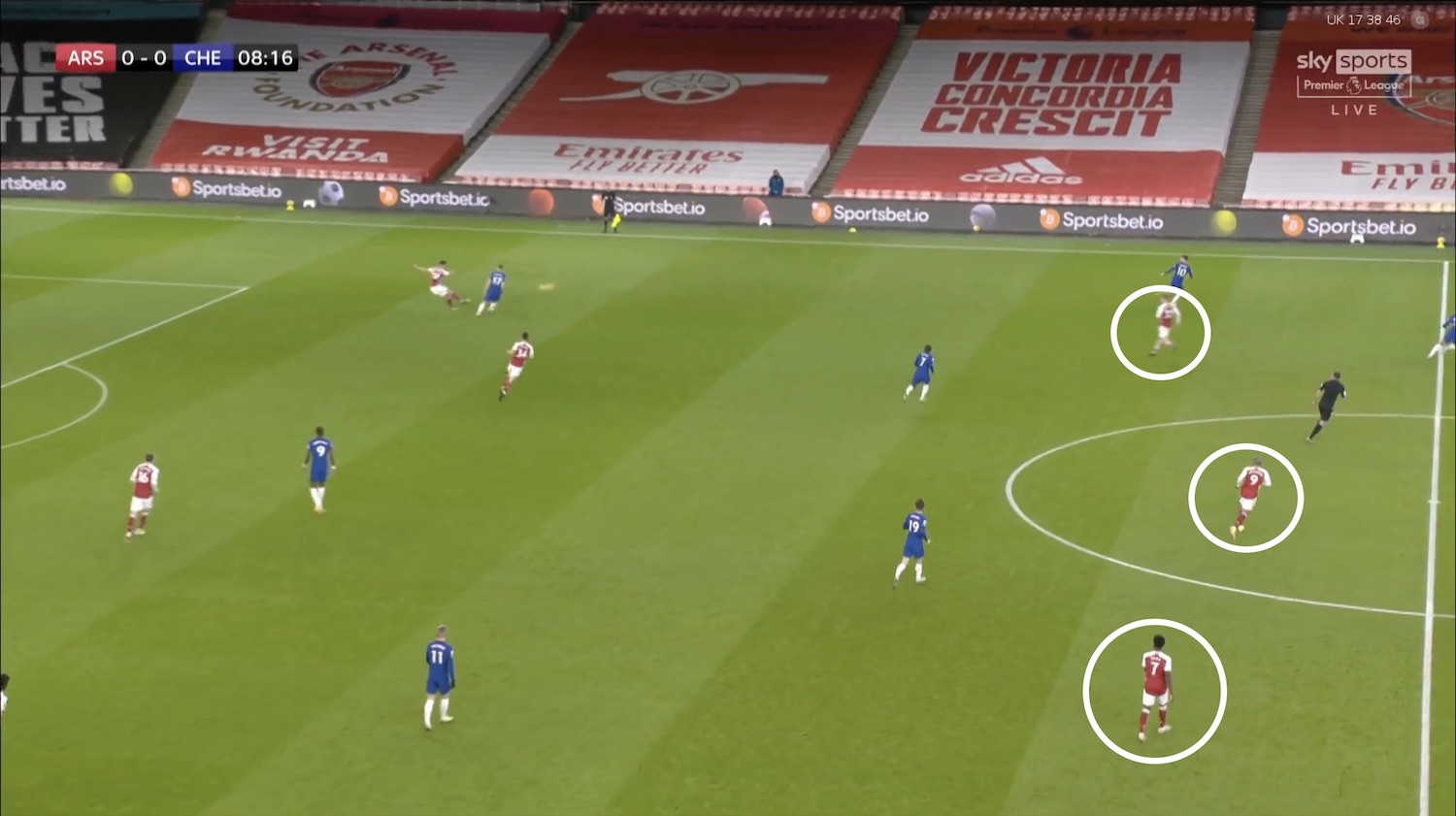 Or Martinelli turning something into nothing to release Kieran Tierney, or Bukayo Saka darting in behind as Lacazette dropped off. 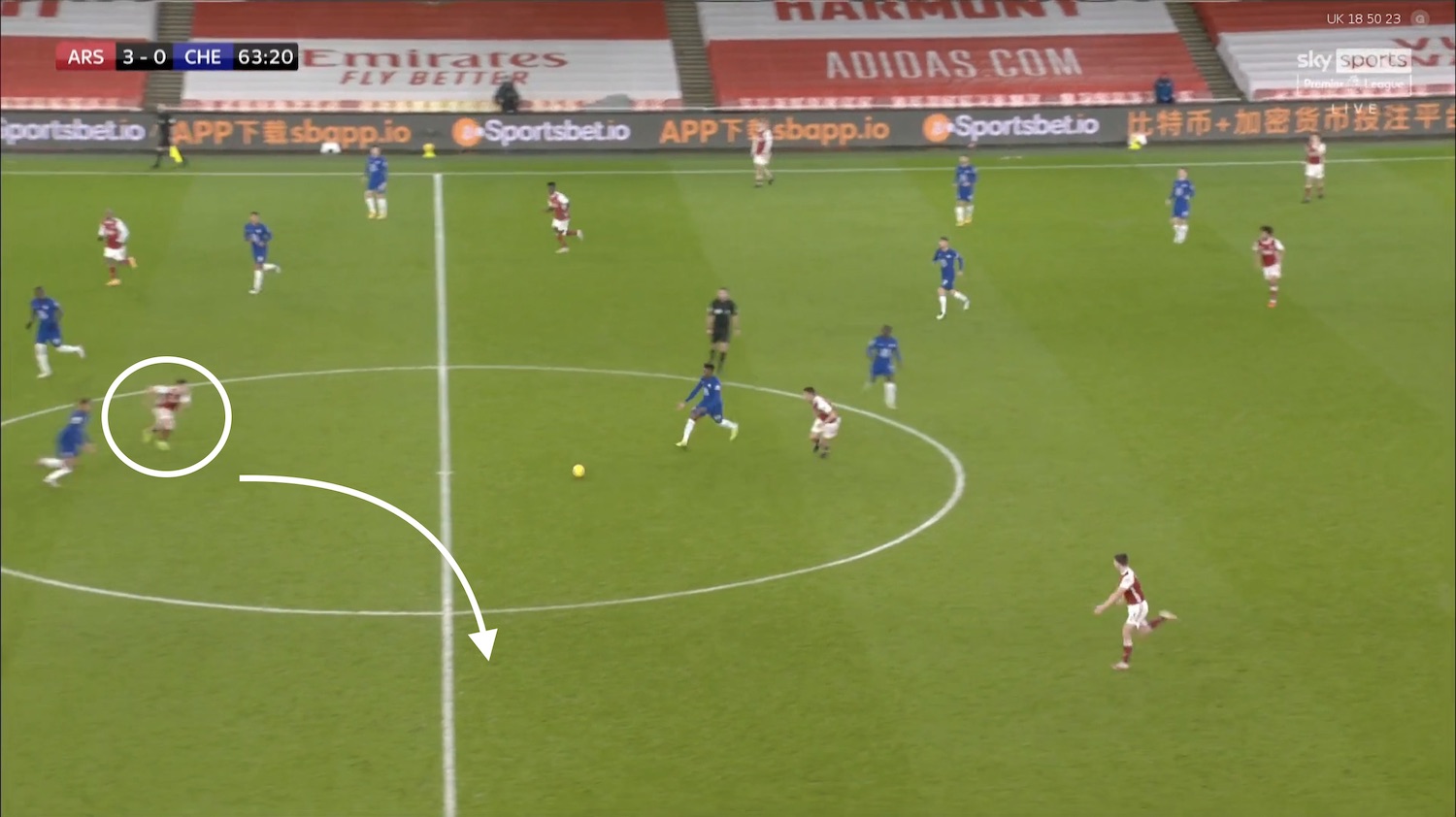 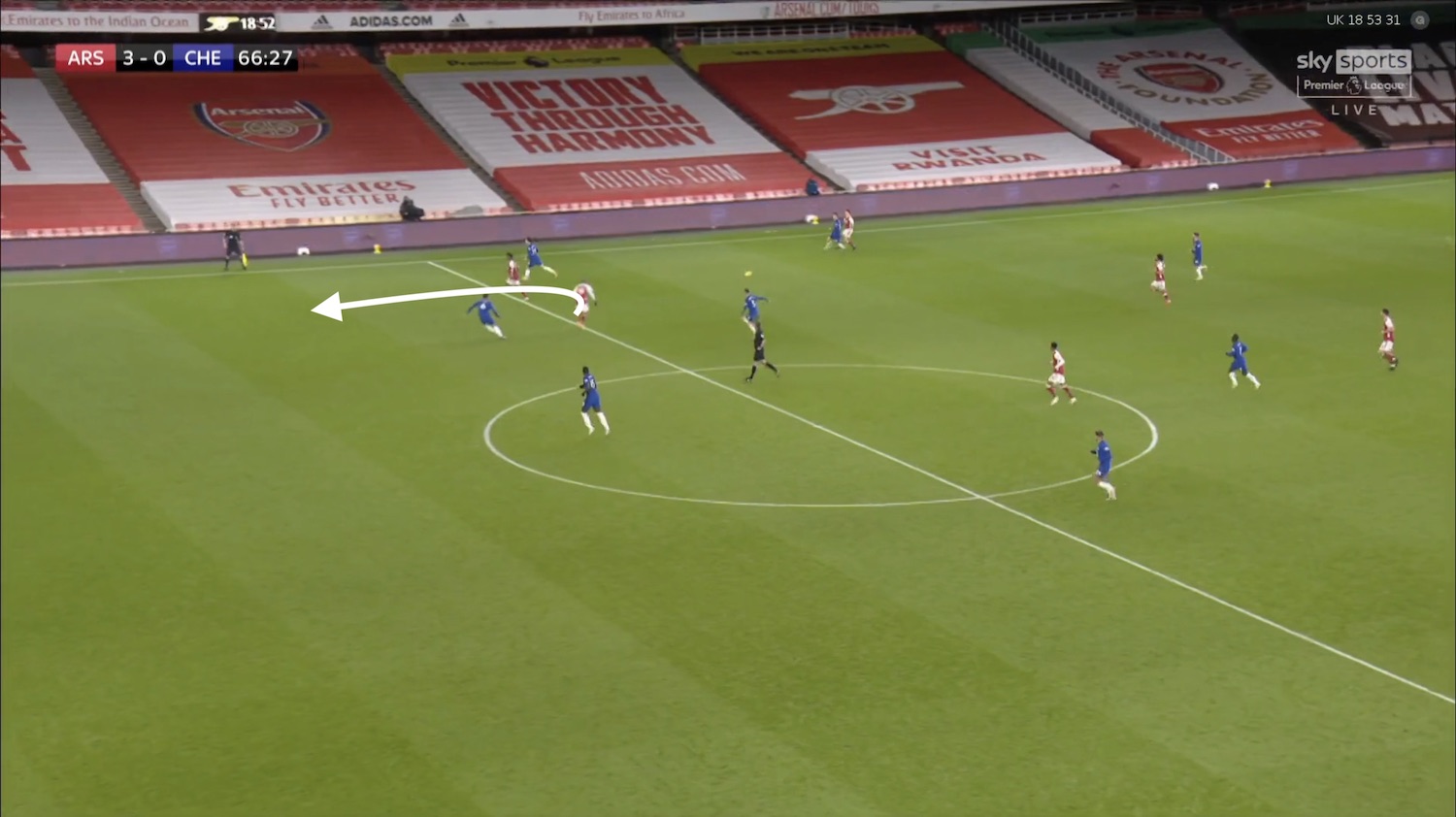 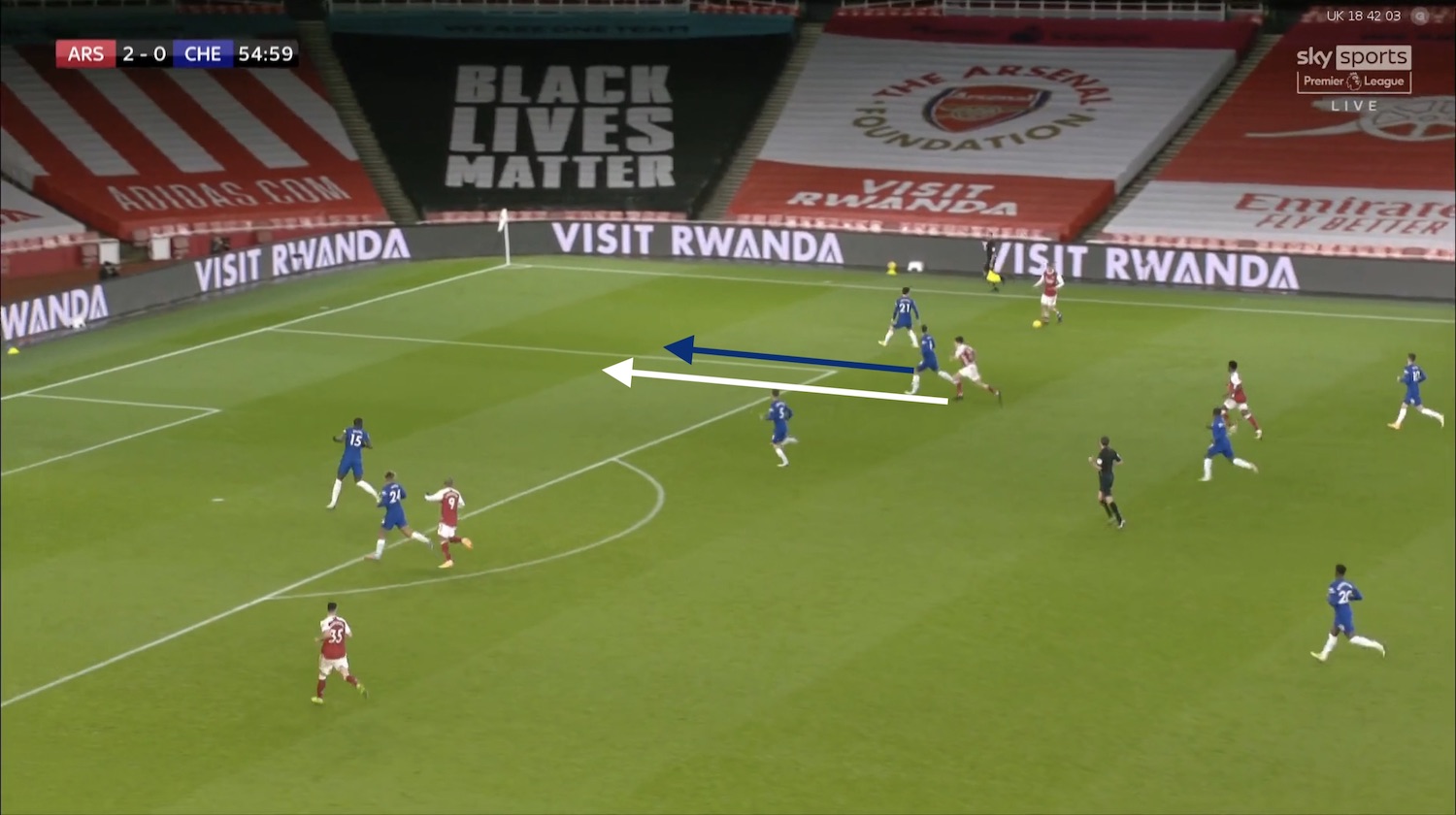 We’ll take his word for it that he meant it, won’t we?

An Arsenal side with three huge young talents in attacking midfield played more freely than any other Arsenal side in the Premier League so far this season. Mikel Arteta could yet change his side again in the weeks to come, especially given how long Martinelli and Smith Rowe have spent injured, and how much football Saka has had to play over the past 12 months. But he loosened the shackles and Arsenal came to life on Boxing Day. And it will delight his manager that the three goals came from their use of the flanks, their ability to force Chelsea into mistakes on the ball, and their purposeful movement in attack.

The players who delivered that will surely now feature heavily in his plans moving forward. If nothing else, he owes it to them. Hopefully they’ll be allowed to contribute without being suffocated by the strict system that has seemingly troubled so many of our performances in 2020. There’s a long way to go before Arsenal are anything like we want them to be, but this was something to hold on to and build from moving forward.

Merry Christmas, a happy New Year, and here’s to more of the same!