Arsenal have strengthened adequately this summer after signing Willian and Lille defender Gabriel Magalhaes, but as news broke regarding the stalled talks for Lyon captain Houssem Aouar – pitchforks were out. It looked like midfield would be neglected again.

But with just hours left before the transfer deadline, the Gunners returned for long-standing target Thomas Partey and deposited his full release clause to LaLiga HQ. But who is the Ghanaian, what will he bring to Arsenal and why is he costing the best part of €50 million?

After growing up in Odumase Krobo, Partey moved to Ashaiman with his father Jacob – who was also a football coach – aged 10 in order to pursue a professional career. Eight years later he was spotted by an agent playing for local side Odometah FC and promised opportunities in Spain should he make the trip north. Many young hopefuls in Africa have been scammed by fraudulent representation but this promise was thankfully kept true, as academy trials in Madrid awaited him.

Thomas spent one month with various academies and was later signed by Atletico Madrid, joining their B team where he quickly impressed manager Diego Simeone. The midfielder then enjoyed two loan spells with RCD Mallorca and Almeria before making his first-team breakthrough in 2015. Despite initially performing a squad role, the Ghanaian grew in stature and became a key figure in the capital – averaging 30 starts per season since 2018.

At face value, Partey profiles extremely well for a midfielder. He stands at 6’0” with strength and athletic capacity to compete in central areas, while also possessing technical quality to facilitate ball progression. Under Simeone, Atletico deploy a 4-4-1-1 formation that relies on soaking up pressure and counter attacking, placing emphasis on his strikers and wide men to contribute. This results in Partey often having to cover large spaces should transitions occur – a role he performs admirably alongside Saul. 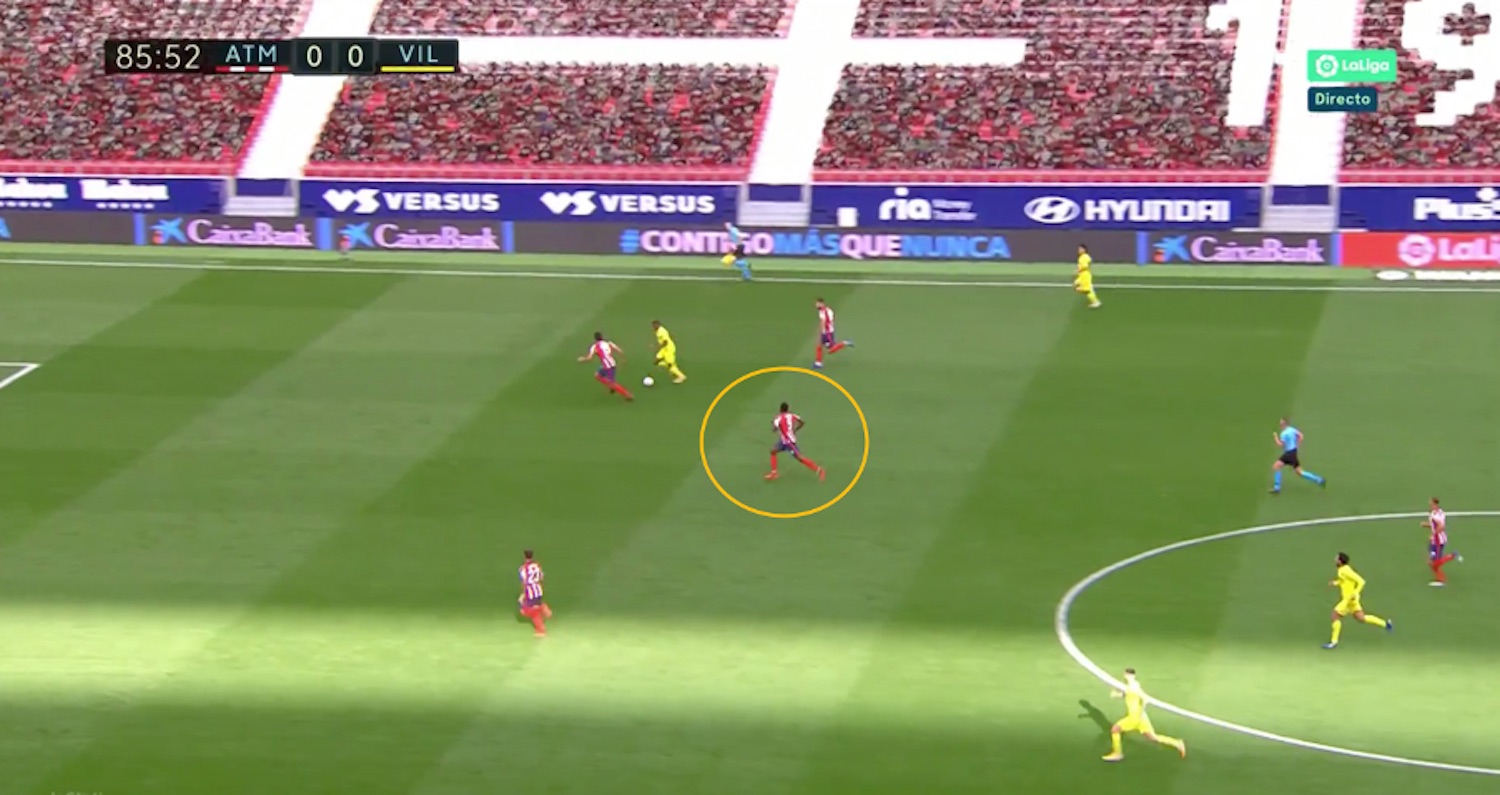 But where Thomas truly excels is in direct duels. His physicality allows him to dominate in close quarters – averaging 2.8 tackles per 90 – with an aggressive, front-footed technique perfected under his manager. The midfielder also has a knack for knowing where the ball will drop and how opposition players occupy space, highlighted by his 1.7 interceptions and 8.2 ball recoveries per 90, putting him ahead of every Arsenal midfielder last season.

More excitingly, the Ghanian is a gifted dribbler and ball carrier which offers stark contrast to the current set of options at Emirates Stadium. Partey averaged 2.7 dribbles per 90 last term and attempted 66 take ons, which were subsequently completed at an 89{3851c0879557ceb6c70cddb6630c7df9a9750acfd53fffec21979e603af26faa} success rate. This was the highest among 348 players to attempt 50 or more take-ons last term, with Dani Ceballos (27 take-ons) his nearest competitor at Arsenal. 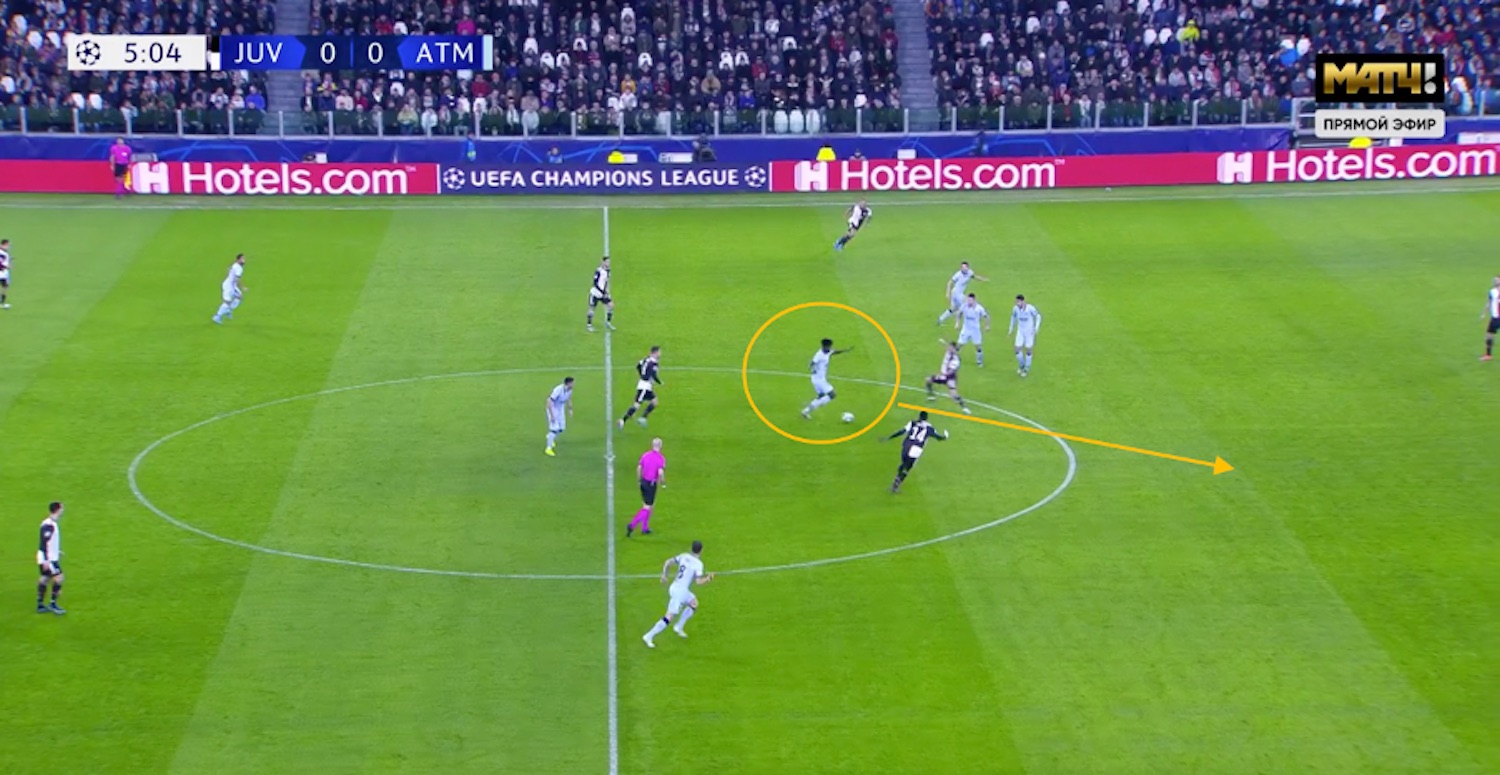 His ability in possession is also extremely underrated. Statistically speaking, the 27-year-old stands clear of his midfield peers for passing metrics despite already outperforming them defensively. Partey completed more forward passes (20), more final third passes (12) and more progressive passes per 90 (11) than Saul, Koke and Marcos Llorente respectively last season. Due to the technical limitations of central defenders Felipe and Stevan Savic, he is entrusted with dropping deep and distributing the ball, pushing Atletico forward with sharp passing between the lines.

Thomas also boasts two trademark passes which could offer Arsenal some variety from their occasionally passive tempo. The first and more commonly used is a raking diagonal to the right back – usually Kieran Trippier – which then allows the wide midfielder to drift inside and add another body in the box. The second is a delicate chip over high defensive lines that proved successful with Alvaro Morata, which could suit the movement sharp movement of Pierre-Emerick Aubameyang. 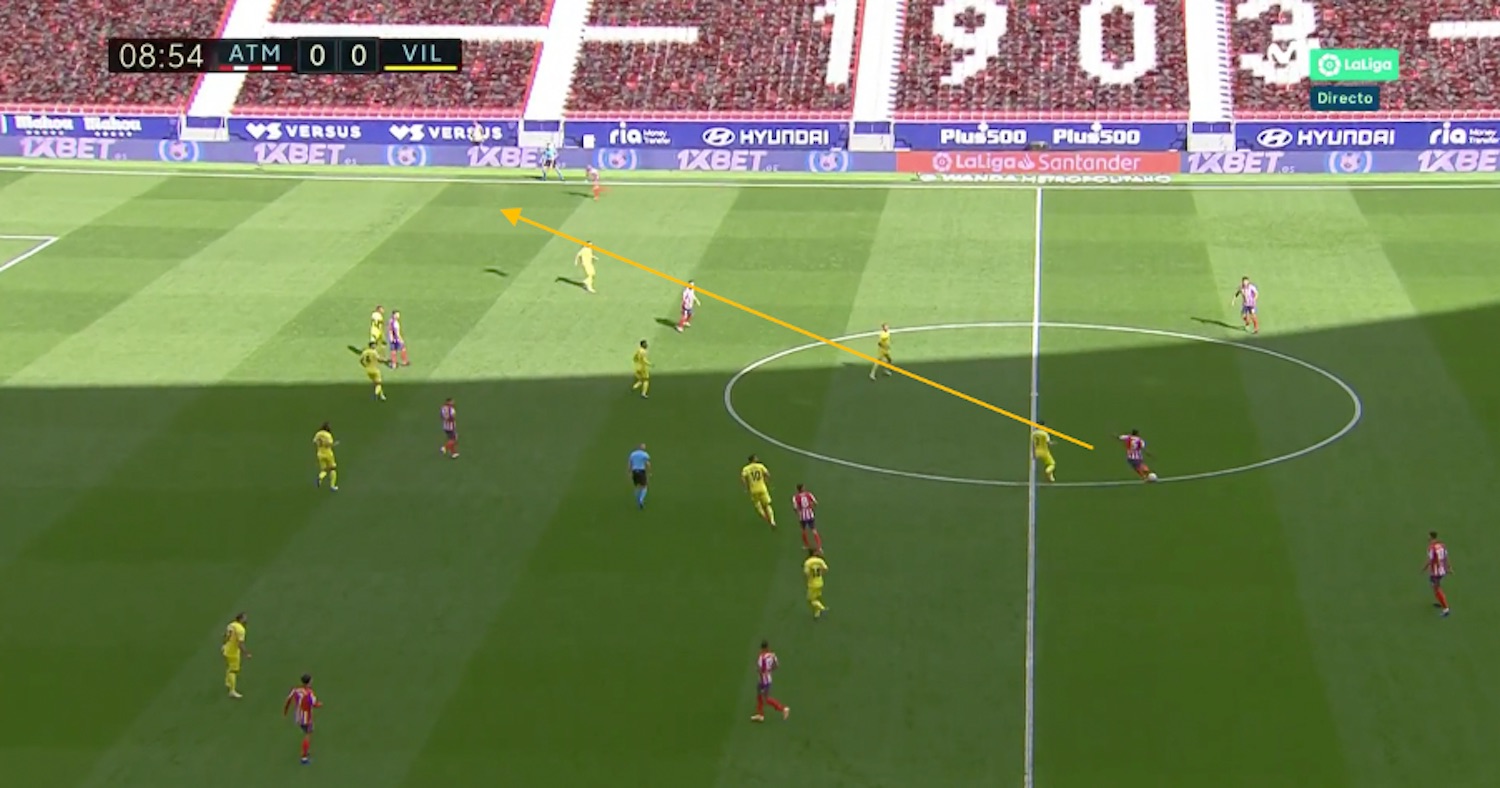 “Thomas is the one who best understands this position and the transition from defence to attack,” said Simeone when asked about Partey in May.

“When he’s at his best level consistently, he’s so good that all the best teams in Europe are looking at him.”

And Cholo was right. Several top clubs have courted him throughout his career, but as with every move there are caveats to consider. The 27-year-old is incredibly well-rounded which makes flaws hard to pinpoint, but his passing in congested areas can be loose. With Arsenal looking to build from their goalkeeper more often, this could prove problematic if pressed. Partey also has a frustrating habit of conceding fouls when opposition players are cornered or posing little threat – something he will have to curb in future.

Financially, the club are also investing significant funds into this deal. He arrives in his peak years which is exciting – not problematic as some have suggested – but the overall outlay is high. He will become Arsenal’s fourth most expensive signing and his reported £200k-per-week wages places him in the top three earners. They cannot afford this deal to go wrong, but hopefully his experience and greater club stability can prevent that. 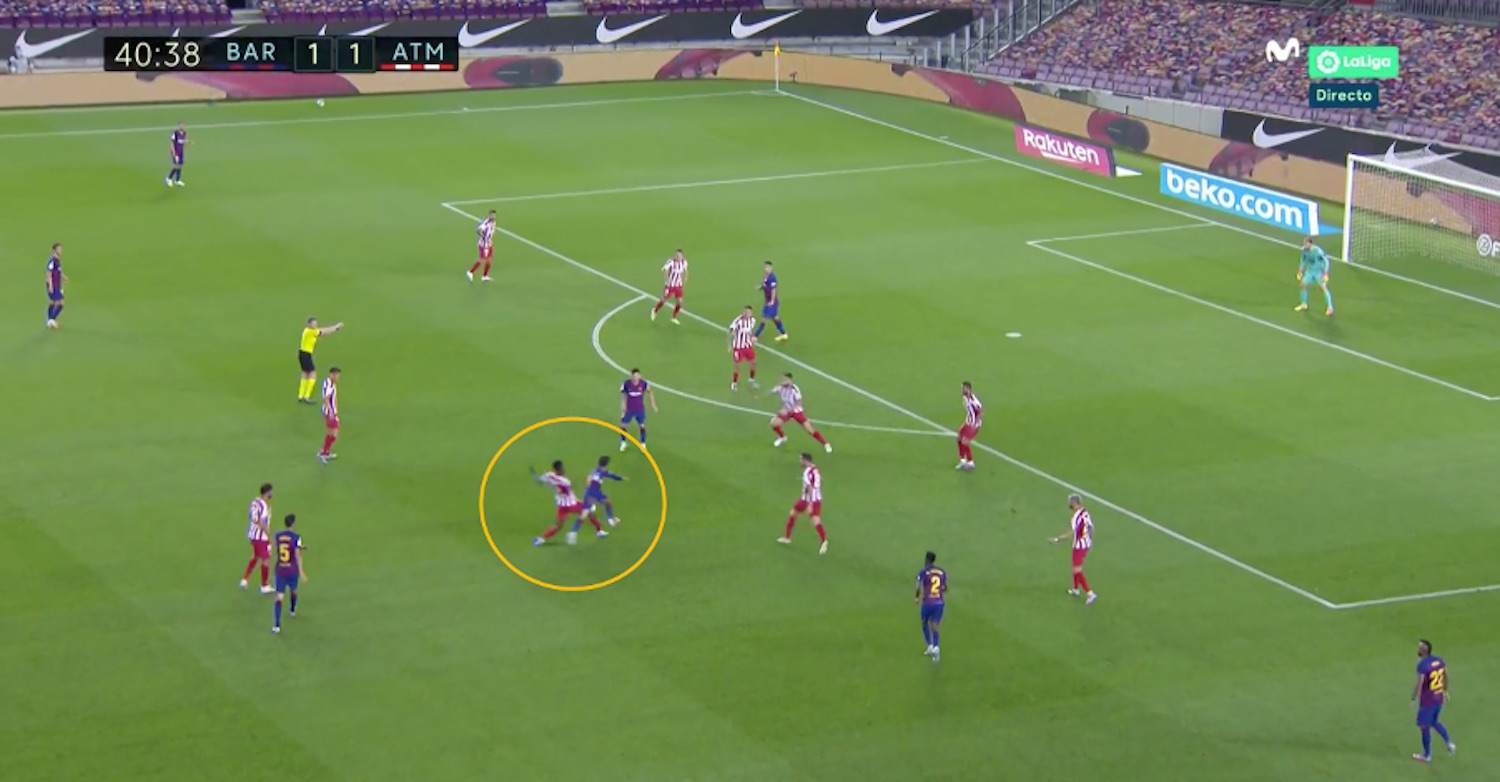 Both on a traditional and more analytical level, Partey ticks plenty of boxes. He is physically dominant, ambitious in possession and looks ready to become a cornerstone for this team. Arsenal have clear issues regarding chance creation and the Ghanaian won’t change that – but what he does bring is authority, physicality and tactical versatility to the current roster. Financial concerns are entirely valid, but those concerns are weighed out by a player arriving with genuine quality and ability to raise the standard.

Mostly through necessity, Arsenal have become increasingly creative in the transfer market. Some signings – Gabriel Martinelli and Kieran Tierney – have already paid dividends while other big money additions continue to split opinion. But they are not banking on potential here.

Thomas is a player with stature, technical quality and mental steel that feels tailor made for what Arteta wants, a midfielder who can provide strength and security to the sometimes vulnerable spine of his team.

Bonus Arsecast on the Thomas Partey signing – listen/subscribe below

The post Thomas Partey: The midfielder tailor made for Mikel Arteta appeared first on Arseblog … an Arsenal blog.