Martin Odegaard played the entire 90 minutes for Arsenal as they beat rivals Spurs in the North London derby on Sunday, with the Real Madrid loanee’s highlight an equaliser in the first-half.

The 22-year-old certainly isn’t someone that is taking the loan spell lightly and approaching it solely as a temporary move with the view to bolstering his chances at Real Madrid in the future.

That became abundantly clear after the playmaker’s immediate celebration as the Sky Sports cameras followed him off the pitch on the weekend.

After embracing one of Arsenal’s coaches, who no doubt congratulated the Norway international on a key equaliser right before halftime, the cameras continued to track Odegaard as he walked off.

As they zoomed in, Odegaard turned to the side and pumped his fist into the heart of the lens, beaming with a smile and seemingly in the process of blurting out a massive ‘yeah!’ as the footage ended.

Video: Arsenal fans will love what Martin Odegaard did at full-time to celebrate win against rivals Spurs 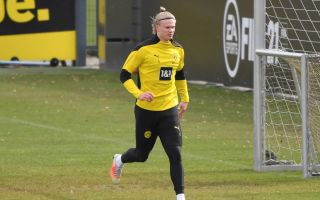 Odegaard has now made 10 appearances for the Gunners across all competitions since joining in January, the Norwegian sensation has firmly become a fixture in the starting lineup as of late.

The post Video: Arsenal fans will love what Martin Odegaard did at full-time to celebrate win against rivals Spurs appeared first on CaughtOffside.