Chelsea fans will be absolutely delighted when they see this moment between impressive summer signing Ben Chilwell and transfer target Declan Rice in England training.

England uploaded a new ‘Inside Training’ clip to their YouTube channel earlier today, ahead of tomorrow night’s massive Nations League clash against Belgium.

The bulk of the clip focused on a 7-a-side training match between England’s ‘Young’ stars vs the ‘Old’, with Chilwell and Rice both representing the young.

In the training battle, Chilwell laid on the assist for Rice’s beautiful goal – which was the pick of the bunch from this session.

During this period, Rice walked up behind Chilwell and surprisingly jumped on the defender’s back, before the midfielder raised his hand just like Bobby Moore did after the 1966 World Cup triumph.

The celebratory moment between Rice and Chilwell can be seen from 9.00 onwards:

Video: Chelsea target Declan Rice gets piggyback off Ben Chilwell in moment that Blues’ fans will love during England training 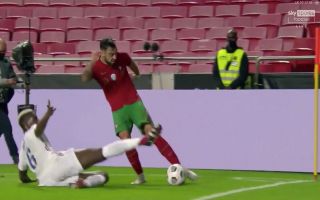 According to the Athletic (subscription required), Chelsea are planning to make another approach to sign Declan Rice from West Ham in the January transfer window.

The Blues are confident that they could convince Rice to join at the mid-season point, presuming they are able to agree a fee with the Hammers.

Rice has really taken his game to the next level this season, the defensive midfielder is full of confidence and is starting to showcase the impact he can make to the Hammers’ attacking play as well.

Chelsea will continue to be linked with the 21-year-old, given that they released Rice at the age of 14, they will always be mooted as the next destination for the star.

The post Video: Chelsea target Declan Rice gets piggyback off Ben Chilwell in moment that Blues’ fans will love during England training appeared first on CaughtOffside.