Everton have done it. Dominic Calvert-Lewin has rescued the Toffees a point in the dying seconds at Old Trafford.

Man United headed into the half-time break two goals to the good, but Everton fought back to make it 2-2.

A header from Scott McTominay landed in the back of the net and put Man United back into the ascendancy, with it looking as though the Red Devils were set to pile the pressure on their city rivals in the title race.

However, right at the death, man of the moment Dominic Calvert-Lewin has scored to ensure it’s honours even, which will have City fans on their feet for sure! 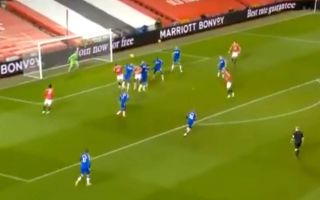 Man United have been renown as the comeback kings of this Premier League campaign, but Everton have played their own game against them here.

Calvert-Lewin is enjoying the kind of season where everything he touches turns to gold, and that’s proven to be the case at Old Trafford tonight.