This might be a very niche, specific thing, but I like how after the first round of Premier League games the goals for/against columns tell you the scores of those matches.

I also like how we’re top. All we have to do now is just hang on for another 37 games and we’re champions. If you’d like some extra reading about our win over Fulham at the weekend, Lewis has a tactics column here, while over on Arseblog News, for those who dig stats, a new feature for this season called ‘By the visuals‘ by Dom Corrigan is well worth checking out.

One of the more pleasing aspects of Saturday’s win was the fact we were more progressive and attacking within the current system we play under Mikel Arteta. There are always lots of questions about what his long-term plan is in terms of formation. Ultimately, I think he will want to play with a back four, but right now needs must. We don’t have the defenders yet in place (or perhaps ready) to deploy that, but also I think we lack the midfielders he wants to have at his disposal to do it too.

It’s why I think links to Houssem Aouar are so interesting. When you hear Lyon’s sporting director say he’s a player that Arteta really wants, it’s not because he wants to stick him alongside Xhaka to play a deep lying midfield role. So, until he has him – or somebody of that profile that he trusts – I think he’ll stick with this back three system. We can all see that it’s something more fluid than that anyway.

If you look at Gabriel’s heat map from Saturday, he basically played in the areas you’d expect a left-sided centre-half to be: 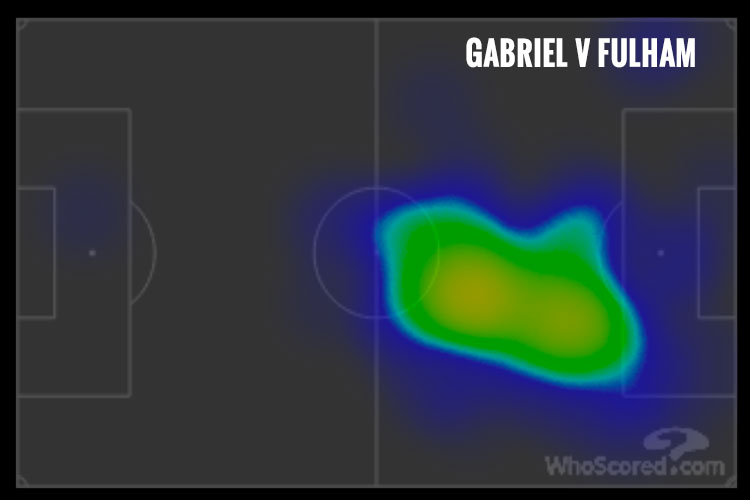 While Kieran Tierney’s is pretty self-explanatory too: 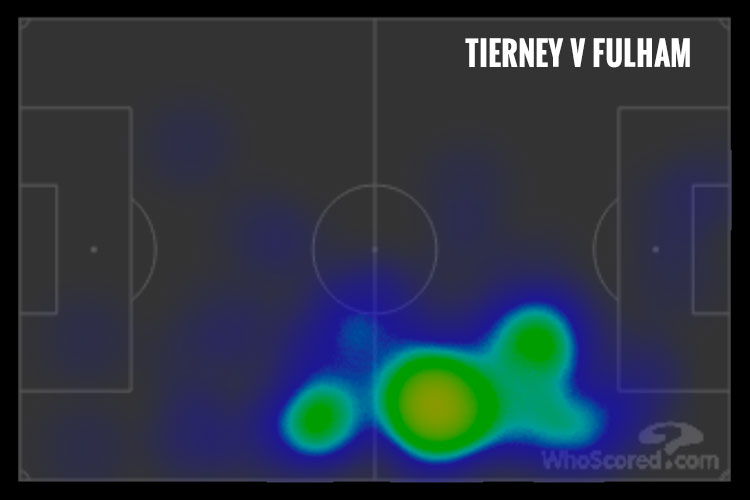 There is an perception that three at the back is inherently defensive – I think it stems from the fact that when Arsene Wenger first started using it, it was a last-ditch attempt to add some solidity to a team which was all over the place. Similarly, when Unai Emery – who started life at Arsenal with a back four – tried to do something similar, he went with a back three. We weren’t simply defensive with him in that system though, we went backwards, got worse, and ultimately – despite some flitting between that and a back four – it ended up with him getting sacked.

Arteta began his time at Arsenal with a back four, and it was really only after the lockdown that the three became our default. We may have used it a couple of times previously, or at least flirted with it by dropping Xhaka back into a central defensive area, but in our first game back against Man City, we sent out a back four – a plan undone by injuries to Xhaka and Pablo Mari (who remains sidelined to this day). Our next game, the 2-1 defeat to Brighton, also saw us start with a back four of Bellerin, Mustafi, Holding, Kolasinac – and it was the trip to Southampton – which resulted in a 2-0 win – which saw Arteta use the back three we’ve continued to this day.

One of the issues we had – outliers like the 4-0 win over Norwich aside – was trying to make it as effective against teams outside the of big boys. It worked against Man City and Chelsea in the cup, we beat Liverpool in the league with it (although that was more down to their mistakes than our control of the game), but also lost to Aston Villa in a game which really highlighted our inability to break down an organised, or at least stubborn, defence.

So, it was pleasing to see us address that in the Fulham performance. I know one swallow does not make a summer and all that, but there were definite signs that we can do more from an attacking perspective while using this system. Our left-hand side has always had a particular bias because that’s where our best goalscorer operates from, so there’s a natural tendency to favour that side of the pitch.

Against Fulham, Hector Bellerin’s average position was higher on the right that Maitland-Niles and Tierney on the right, and the ability he shares with Willian to be able to play inside or outside caused the opposition problems. How often do you see a right back thread an eye-of-the-needle pass like that to a striker on the run (and I realise this came with Pepe on the pitch)?

So, while long-term I still think Arteta’s preference is for a back four, until such time as he can put it together the way he wants to, he has to get results and make the back three look better. The weird end to last season, with games every few days, plus the truncated off-season when players were away taking a break or away with their international teams, hasn’t given him a huge amount of time on the training ground to really do a lot of work. We have a full week before West Ham, we’re already seeing some interesting and very effective patterns of play (i.e – the goals we scored against Fulham and in the Community Shield), so hopefully he can make it better.

If and when we do improve personnel, and potentially switch formations, being comfortable with the back three – something I still think we’ll use in games against tougher opposition – can provide us with a tactical flexibility that should be very useful. Under Emery, his tinkering felt like exactly that, we never quite looked like a team that was deliberately trying to do anything. You can see how that’s different under Arteta, that there are things he wants to see from his players, repetitions of movement and so on, that players appear to be more in-tune with.

Its one game, I know, but it was one very encouraging game. There are many questions to answer still, issues to be resolved with players and systems, but one of those was not performing in games like the trip to Fulham, so let’s look at this as green shoots and hope we can build from here.

Right, I’ll leave you with a brand new Arsecast Extra, chock full of post-Fulham chat and listener questions. All the links you need to listen/subscribe are below.

This Arsecast Extra was recorded with ipDTL

The post Back three or back four? For now, Arteta is making the former work better. appeared first on Arseblog … an Arsenal blog.