The Santos’ board of directors are in advanced talks and are very close to an agreement with Juventus for a transfer sum of Kaio Jorge.

UOL Esporte reports that the Brazilian club will receive €3-million for the 19-year-old striker from the Serie A side. President Andres Rueda is still considering the possibility of keeping Jorge until the end of his contract, which expires at the end of December. 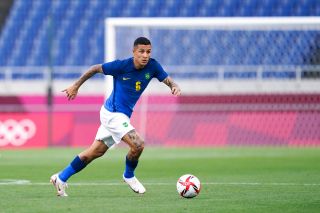 However, the weight of not receiving a transfer sum for one of its prominent players makes Santos inclined to accept the offer. The initial idea of Santos was to seal the teenager’s fate with Portuguese giants SL Benfica.

Nonetheless, the young player’s representative, Giuliano Bertolucci, prioritized the player’s desire to act in Italian football and did not negotiate with Benfica, who was willing to offer €4-million.

Jorge has made 80 appearances for the South American club, where he’s scored 17 goals while registering four assists.

The post Juventus is ready to hand over €3-million for Santos starlet appeared first on CaughtOffside.