England are through to the Euro 2020 final and it’s going to be an incredible occasion when they take on Italy in the final on Sunday.

The Three Lions beat Denmark 2-1 at Wembley on Wednesday evening, with Harry Kane’s winner getting the national stadium absolutely rocking.

Fans will be hoping the team can now go one step further and lift the trophy this weekend, but for now it’s clear the players are fully enjoying the moment. 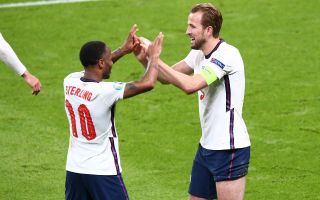 Gareth Southgate and co. certainly deserve it after a superb tournament, which included that memorable 2-0 win over Germany in the round of 16.

Still, there’s never been an atmosphere quite like it at Wembley tonight and you can tell the players really appreciated that as they took to social media to send their messages to the fans after this historic result…

Proud to be part of this team. One final push! See you all Sunday ???? @England pic.twitter.com/aSo3jd9HPT

Wow what a night! Unbelievable performance and we're into a Euros final!!! Wembley was incredible!! ?????????? pic.twitter.com/dOnQq3lrhH

WE ARE IN THE FINAL!!!
Brilliant by the boys showing fantastic character from 1-0 down.
You fans were incredible singing the whole game
Bring on Sunday ???????@england #england #euro2020 pic.twitter.com/vESSflVSdU

Proud to be apart of this team. One more push. We will give it everything?????????? pic.twitter.com/B4tu8RwZsQ

This group is special & I’m proud to be a part of it. Unbelievable performance tonight by every single one of them. #euro2020 FINAL????????? pic.twitter.com/bKmBirnj2f

What a night!!! ???????
I never knew Wembley could sound like that. We are in the final!!!
Thank you everyone for cheering us on tonight, one more big push. #euro2020 #england @england pic.twitter.com/I5AWtJmhyH

What a team !? One step closer …? pic.twitter.com/QfPCkA0j9k

WE’RE IN THE FINAL ???. Team were immense today ? what a night and what support from our amazing fans! See you Sunday ????????? pic.twitter.com/bwaurVGPbm

What a group. One more game. pic.twitter.com/FwBZYsqxnR

What a performance @England pic.twitter.com/nJPewHddQ1

These players are now just one game away from becoming legends, though what they’ve done at the Euros this summer is sure to live long in the memory anyway.

The post “Proud to be part of this team” – England players let emotions out on social media after making Euro 2020 final appeared first on CaughtOffside.