“When you allow Southampton time on the ball, they play with a lot of players inside and they overload you in really dangerous areas. We had to be really careful of that so the more aggressive we could be to regain the ball in those areas, we knew the way they attacked that they could be exposed in transition. I think we did that very effectively and really well for big parts,” Mikel Arteta said after Arsenal beat Southampton on Tuesday evening.

“Defensively, we were really good on the high press and won the ball in really dangerous areas and got going from there.”

It’s not something you really associate with Arteta’s Arsenal since the Spaniard took over. There has been a degree of defensive solidity in big games, and recently there has been a flowing attack, but the 3-1 win on the south coast was largely built around how effectively Arsenal pressed their opponents.

And it wasn’t just about Arsenal upping the ante, but they did so with an intelligence that negated Southampton’s own superbly effective pressing. Ralph Hasenhuttl’s side made their second fewest ball recoveries in a game all season, down from 99 in the encounter at the Emirates in December to 82 at St Mary’s. Arsenal, meanwhile, made 97 ball recoveries having made just 67 when we hosted the Saints in that 1-1 draw.

Throughout the game, Arsenal were keen to force Southampton to play the ball long or backwards and wouldn’t let them play through the middle of the pitch, shutting down all passing options and allowing the ball to be funneled wide, where they could apply pressure against the touchline. 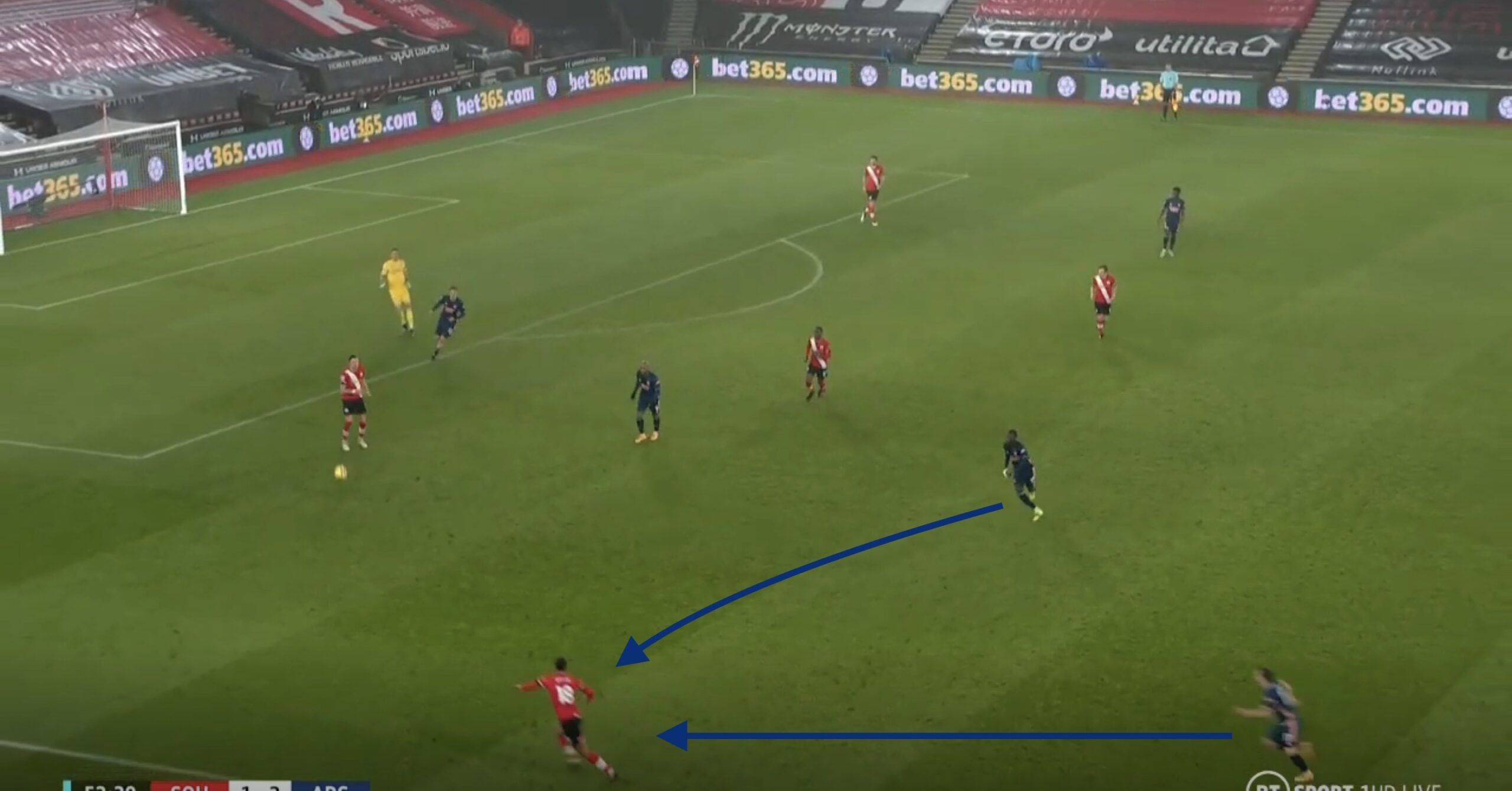 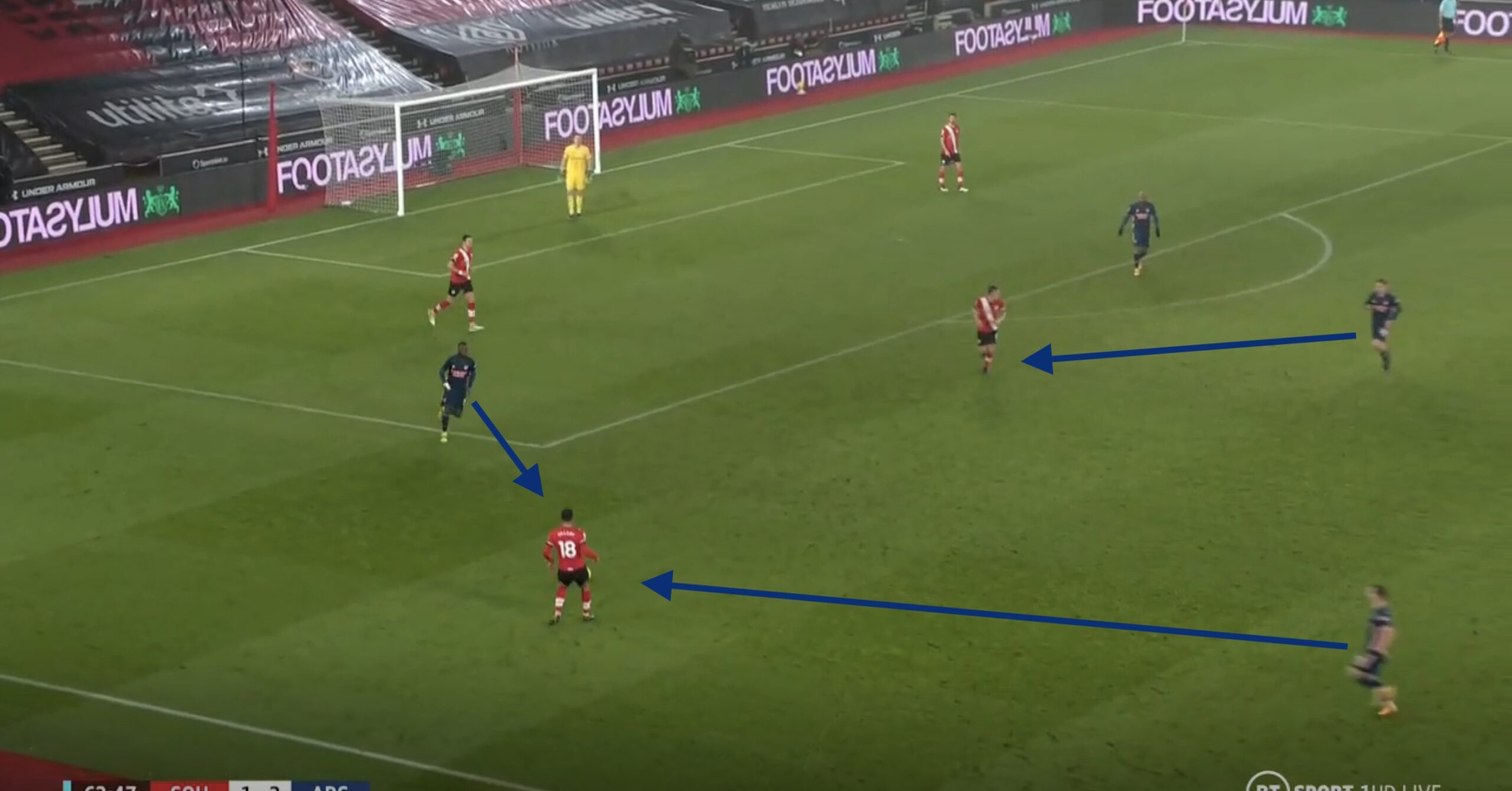 When the Saints did manage to work the ball out of those areas and into midfield, players were quickly shut down, not allowed to turn or play a simply ball forward. In the first example below, Theo Walcott is forced into a misplaced forward pass. In the second, the ball goes back but Emile Smith Rowe pounces on it. 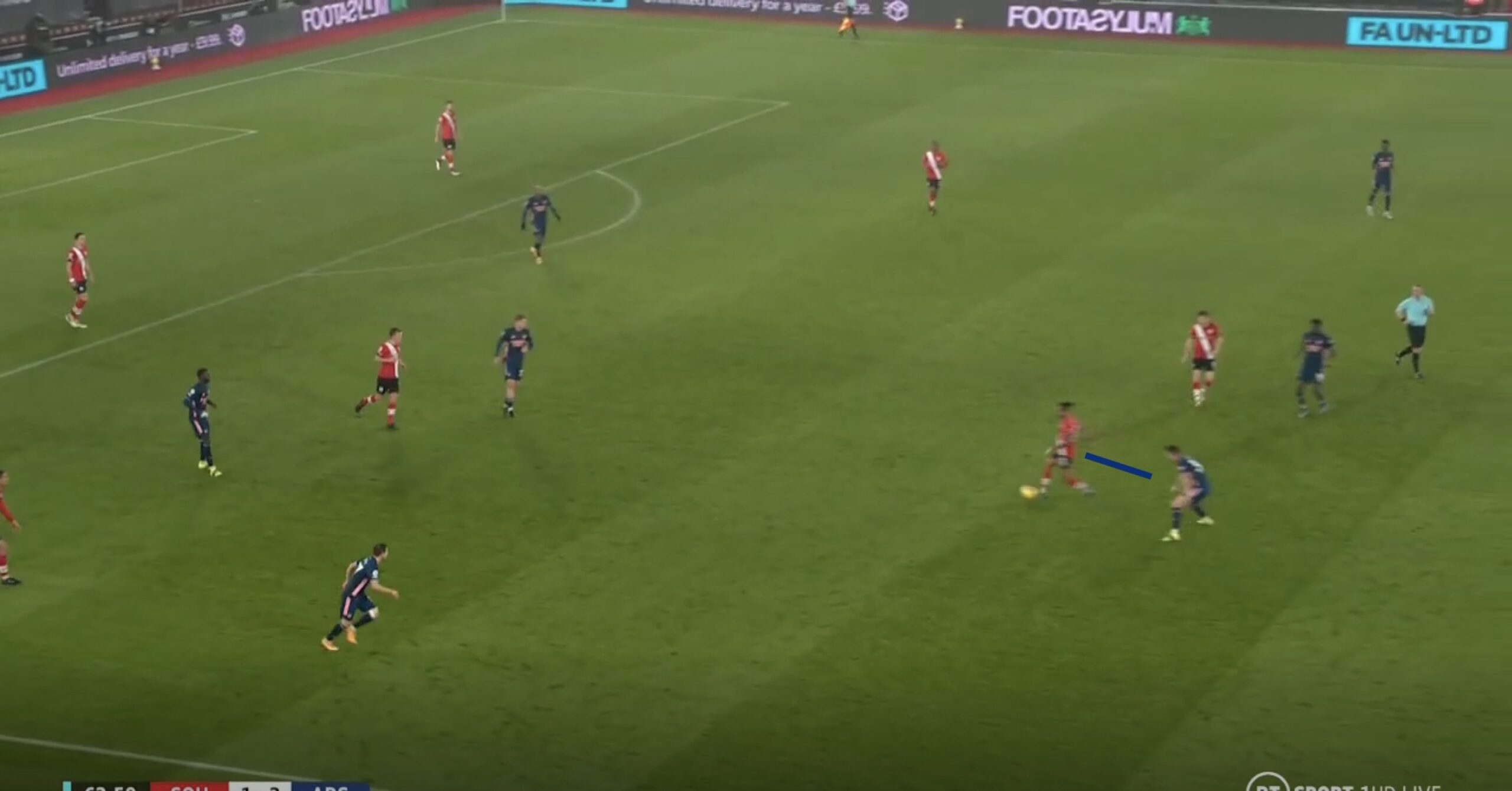 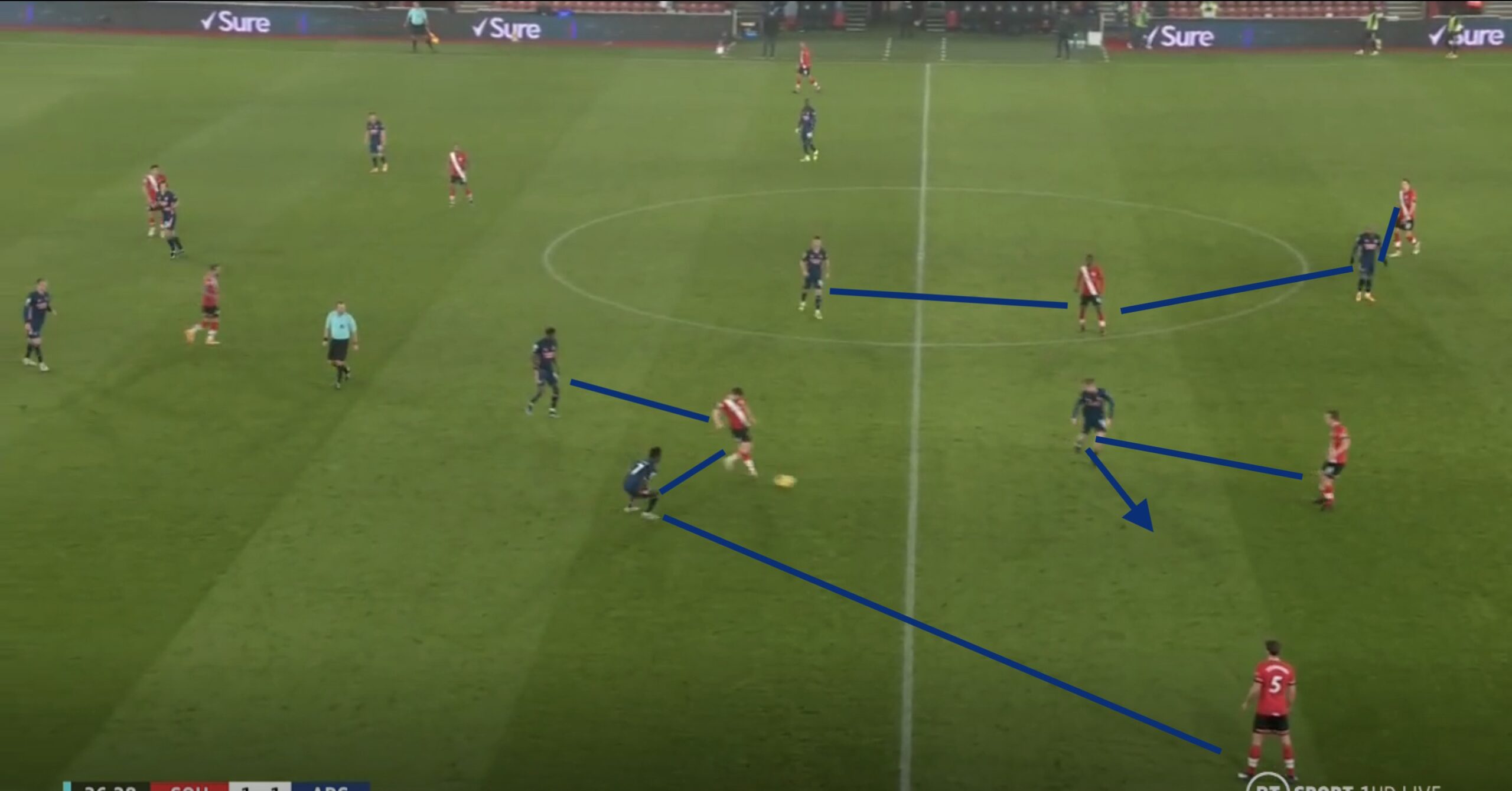 And it wasn’t just that Arsenal cut off easy balls to stop Saints from being dangerous, but Arteta’s side looked threatening themselves from those turnovers.

That was clear from the off and it was eye-opening to see Arsenal not only press high but also turn that into chances. The first, of course, saw Alexandre Lacazette denied after Granit Xhaka had intercepted and quickly got the ball out of his feet to slide the striker through on goal. It was a poor pass that led to Arsenal winning possession but it came from the press, with the Gunners shutting off all options to Jan Bednarek. Under pressure from Smith Rowe, the Pole could go long and give the ball away or try a tricky pass into midfield.

But Xhaka and Partey, while also marking potential recipients of a pass, were on their toes to intercept if Bednarek played a low ball through the middle of the pitch. Which he did. 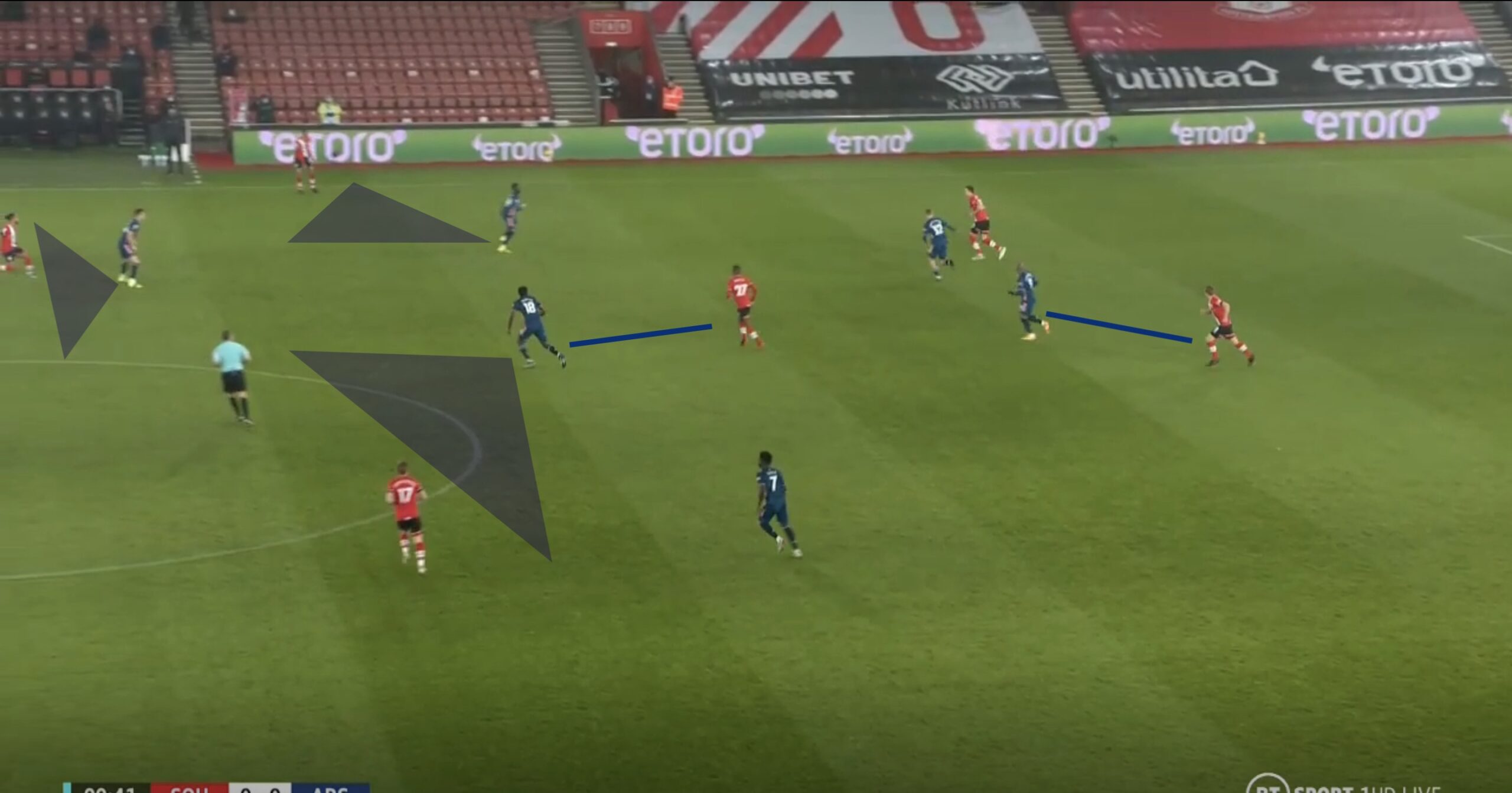 And it was encouraging to see Arsenal not only win the ball but then act decisively in catching Southampton out of position having given it away. Lacazette couldn’t convert but Xhaka also had Saka on his right and Pepe on his left looking to make immediate driving runs behind the backline. 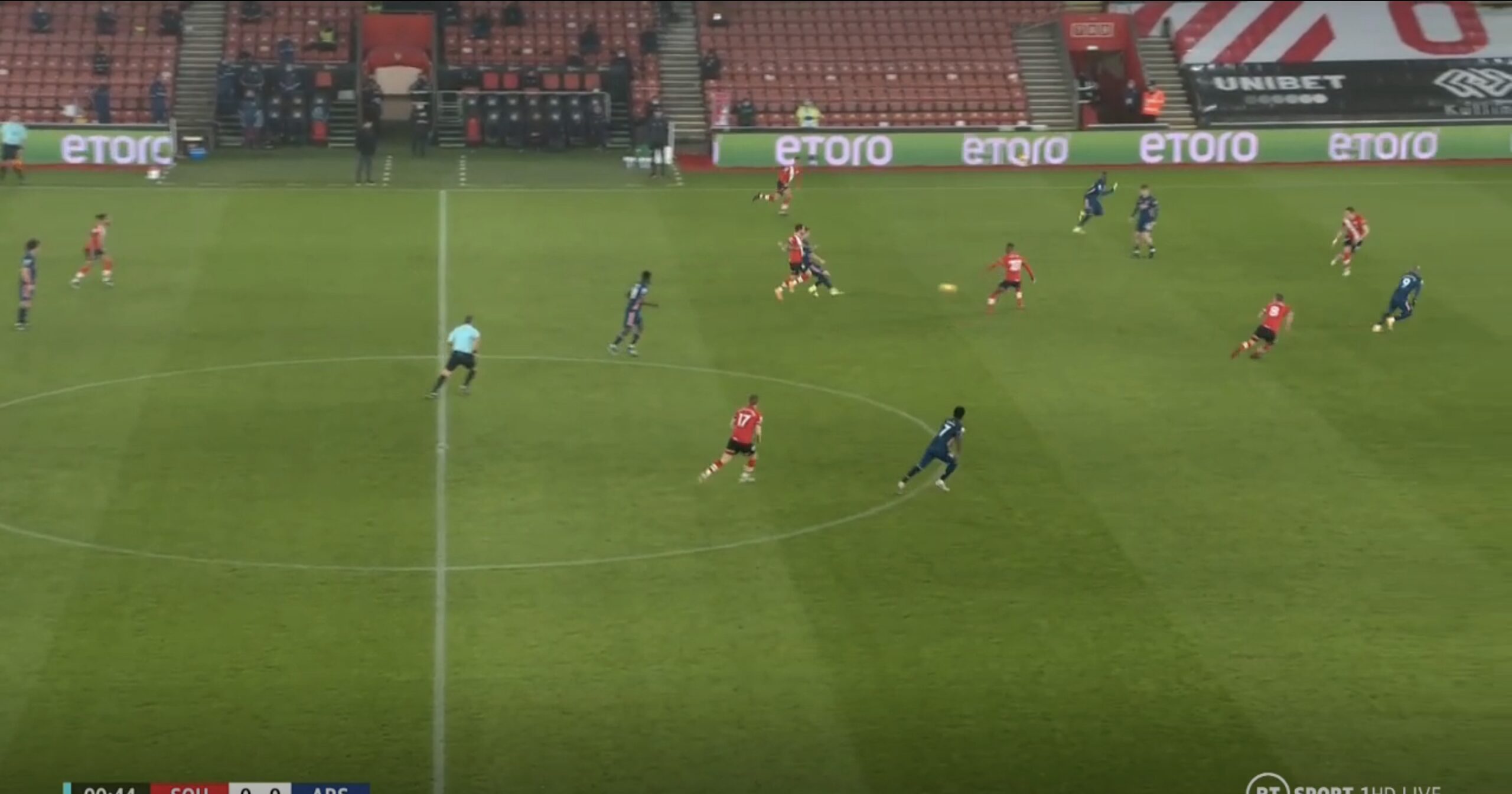 The next time Arsenal worked themselves into a similar situation, they did find the back of the net. Lacazette was instrumental in pressuring Jack Stephens at centre-back. Again, his options were cut off and he attempted a tricky ball between two Arsenal players rather than going long with it. 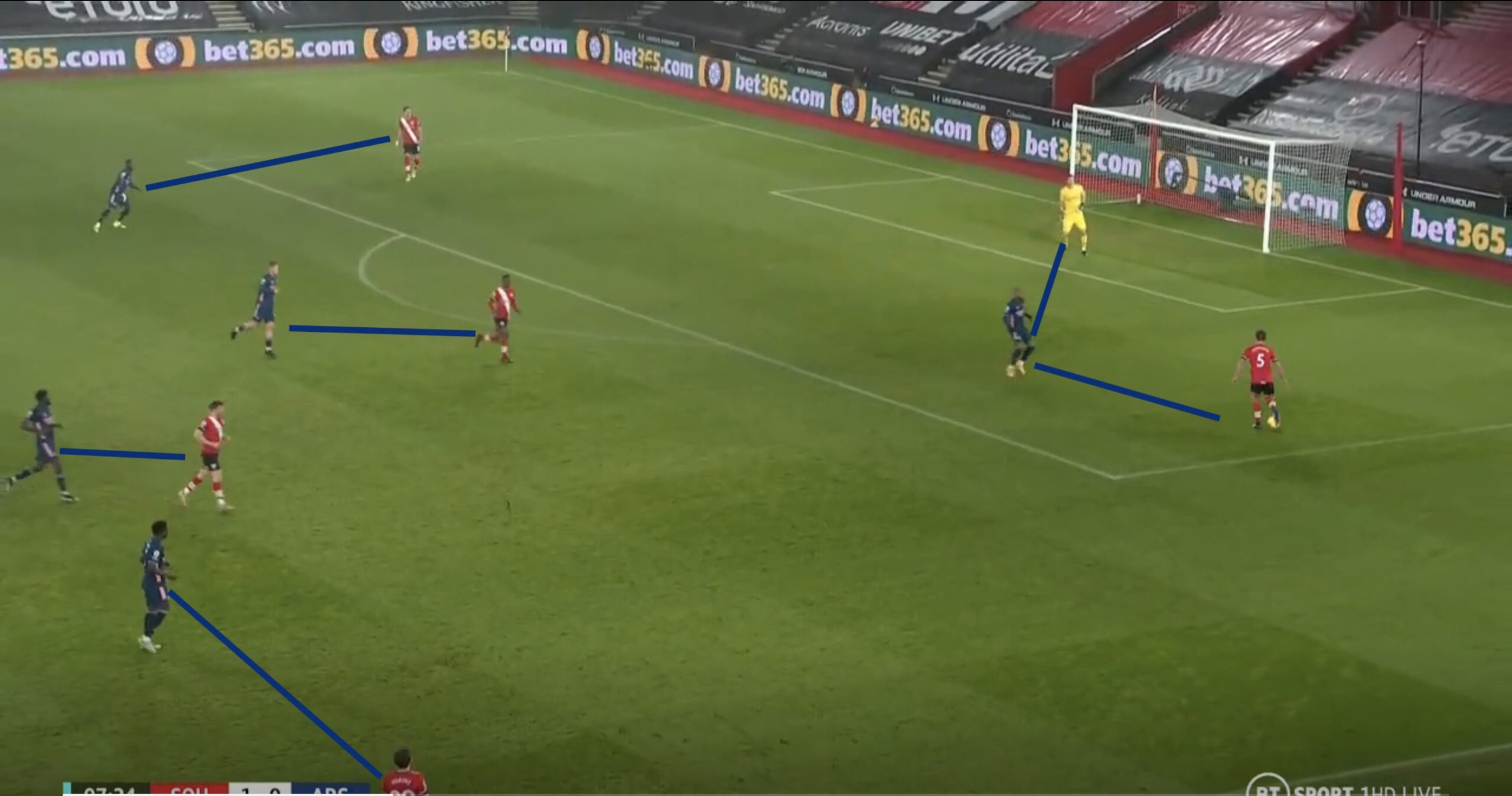 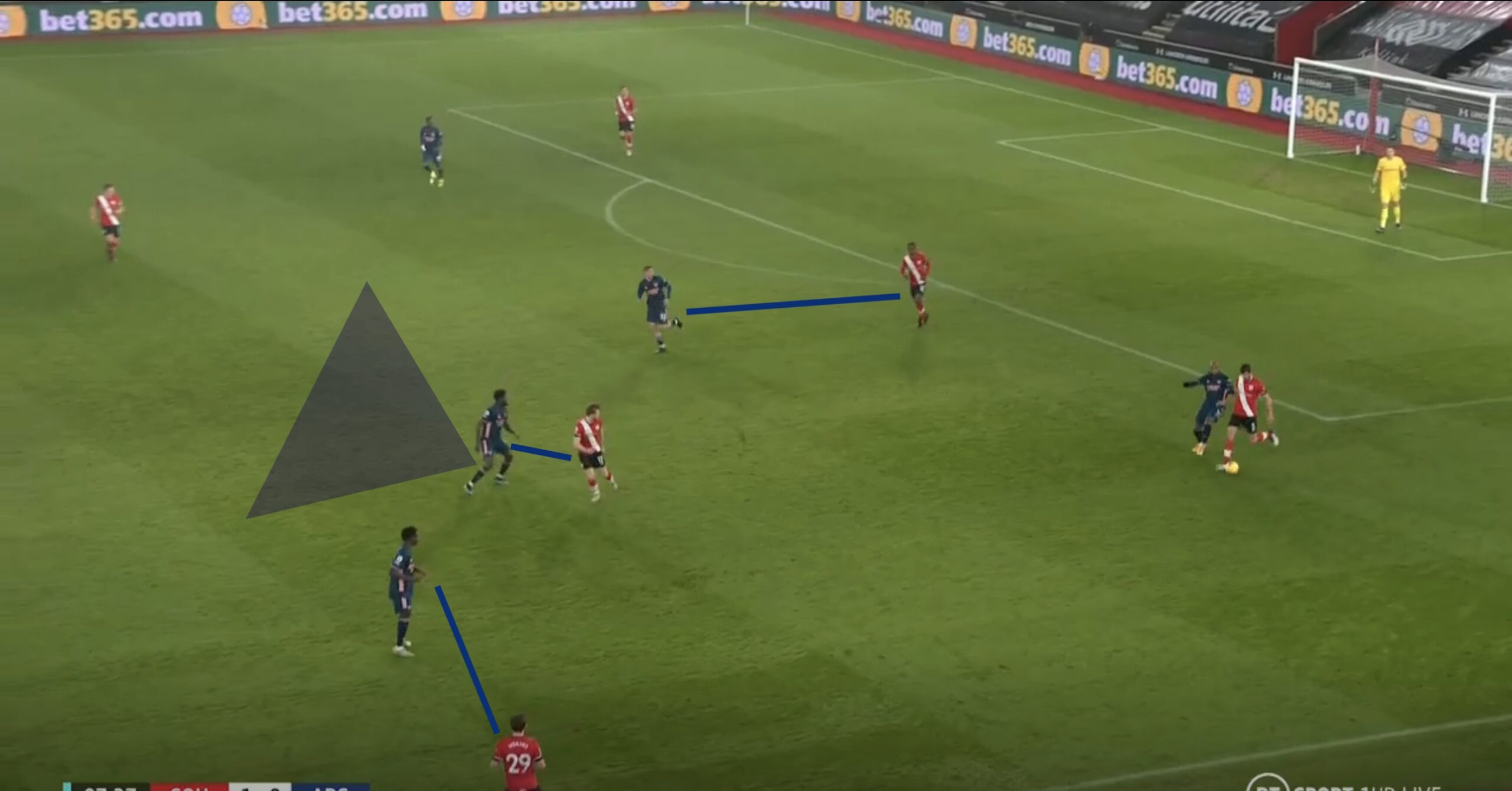 But Thomas Partey took a clever check to his left to stop any pass being played into the middle of the pitch and Bukayo Saka stayed in a perfect position to either cut out any ball that was intended to go beyond him or press the left-back if the ball went there. The winger made the interception, him and Partey worked it to the other side of the pitch, and Pepe — again making a driving off-the-ball run beyond the backline as soon as the opportunity presented itself — made no mistake from another fine Xhaka pass.

Of course, pressing high comes with its own risks, and there were a couple of times when Southampton managed to break through and create dangerous situations, but Arsenal covered the width of the pitch well and managed to avoid too much trouble from those situations.

One more pleasant aspect of the approach off the ball was Arsenal’s comfort in counter-pressing situations, right after losing possession or in the midst of a loose ball. Hector Bellerin, with Partey and Xhaka, did a great job of forming a shield in front of the Arsenal centre-backs to protect them from counter-attacks.

That three-man line in front of the backline could hold Southampton up, win the ball if there were any loose touches, and gave the players ahead of them the chance to work their way back and force mistakes or turnovers right after losing possession. 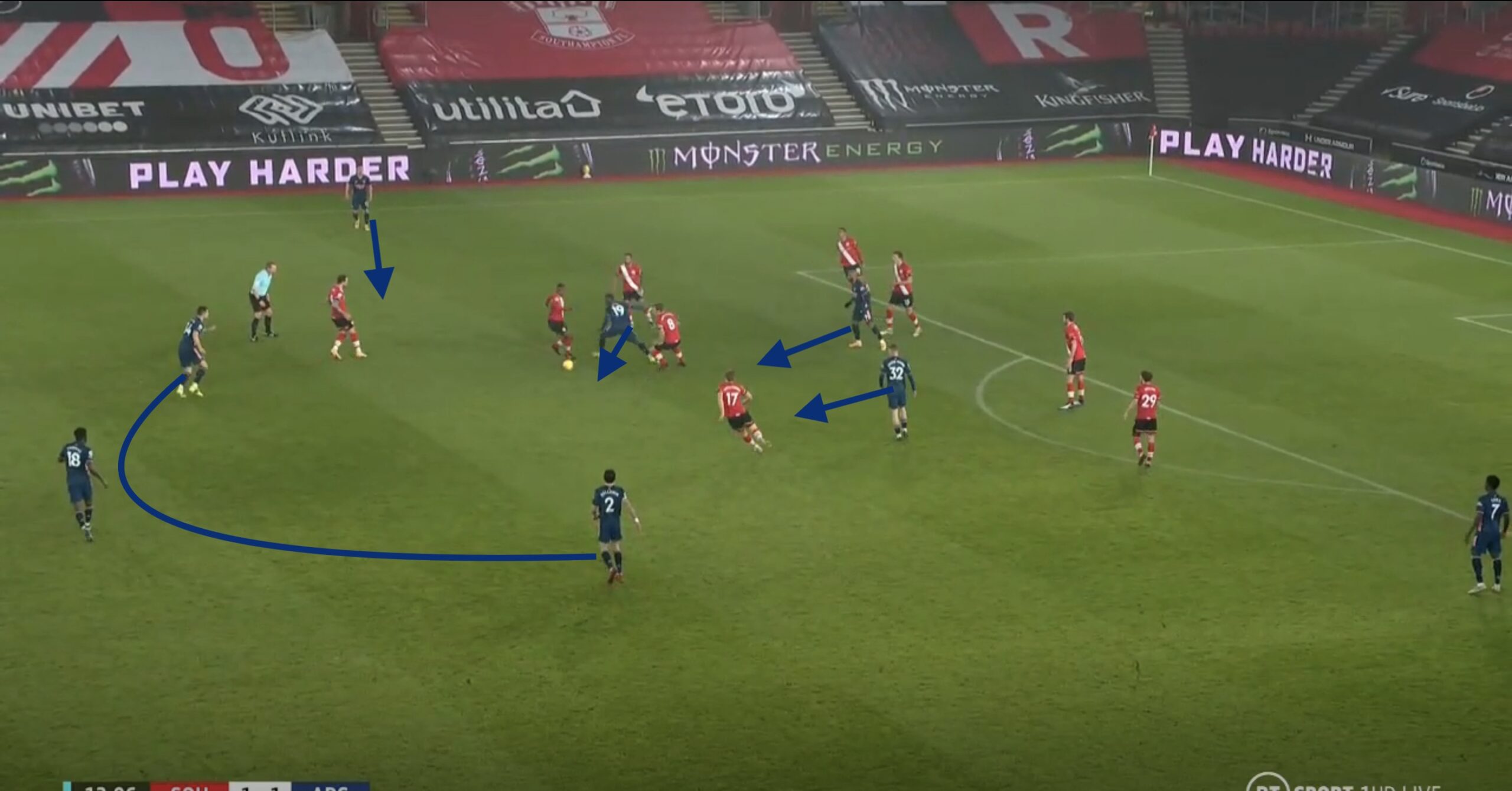 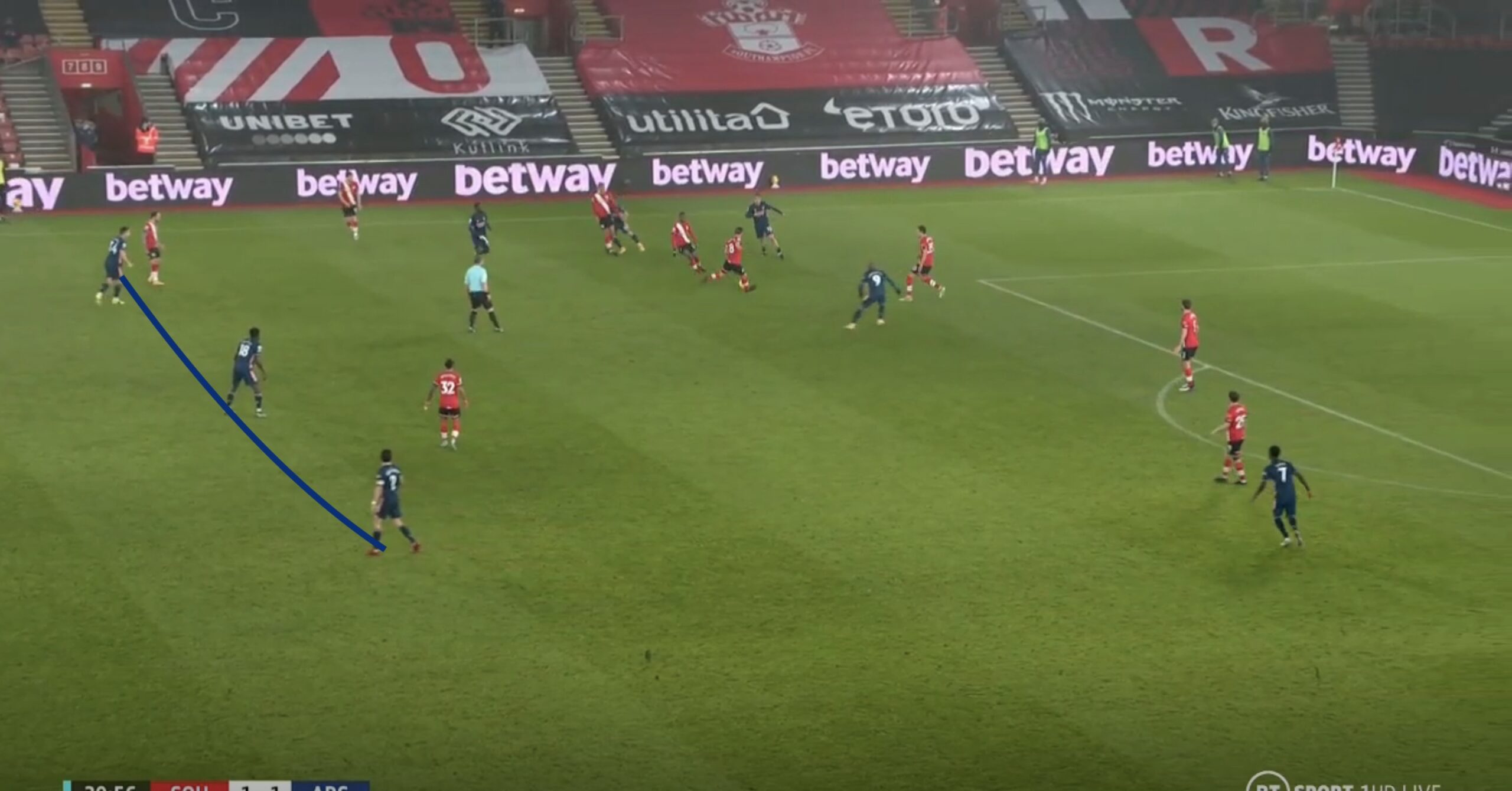 Conceding on the break was an enormous issue when Arteta took over and we’ve seen this approach from Arsenal before, but it’s the first time we’ve really seen it in combination with the sort of co-ordination and intensity further upfield to force turnovers or, at worst, make the opposition play the ball backwards.

There was also plenty to like about Arsenal’s game with the ball. Playing Southampton and remaining calm and patient in possession is a tall order, but one the team stood up to by using the width of the pitch. Southampton press high but also look to make the pitch narrow, dominating the centre and pinning teams to one of the flanks with their narrow 4-2-2-2 shape.

But Arsenal players, crucially, knew what they were going to do before the ball arrived, saving them an extra touch and not giving Southampton’s players an extra second to shut them down. After playing themselves out of trouble, a switch of play was often on the cards, with space and a numerical advantage on the other side of the pitch.

See how Arsenal would try and coax Southampton to one side of the pitch before quickly moving the ball to the other flank, where either had a spare man or the space to take on a defender one on one. 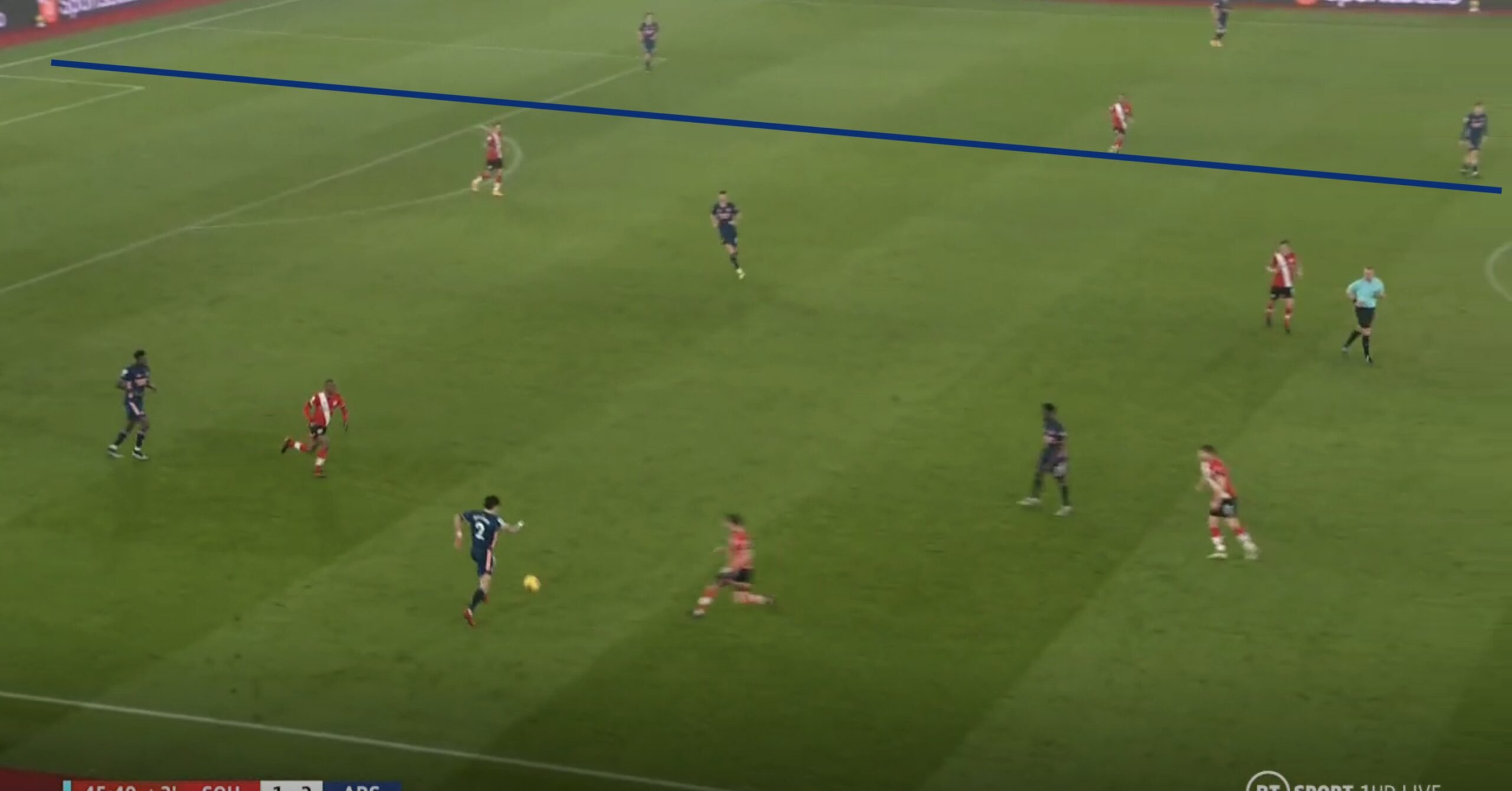 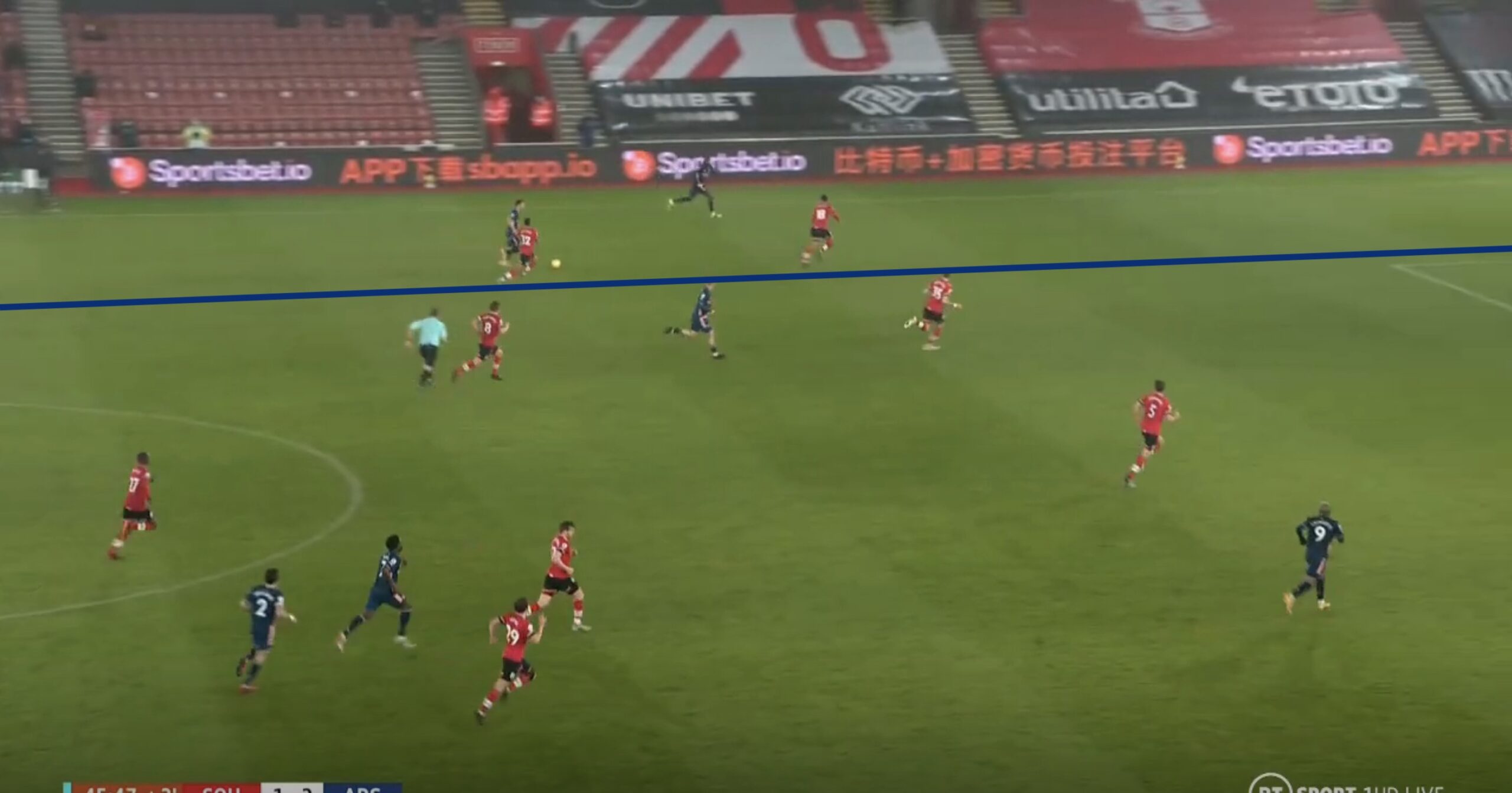 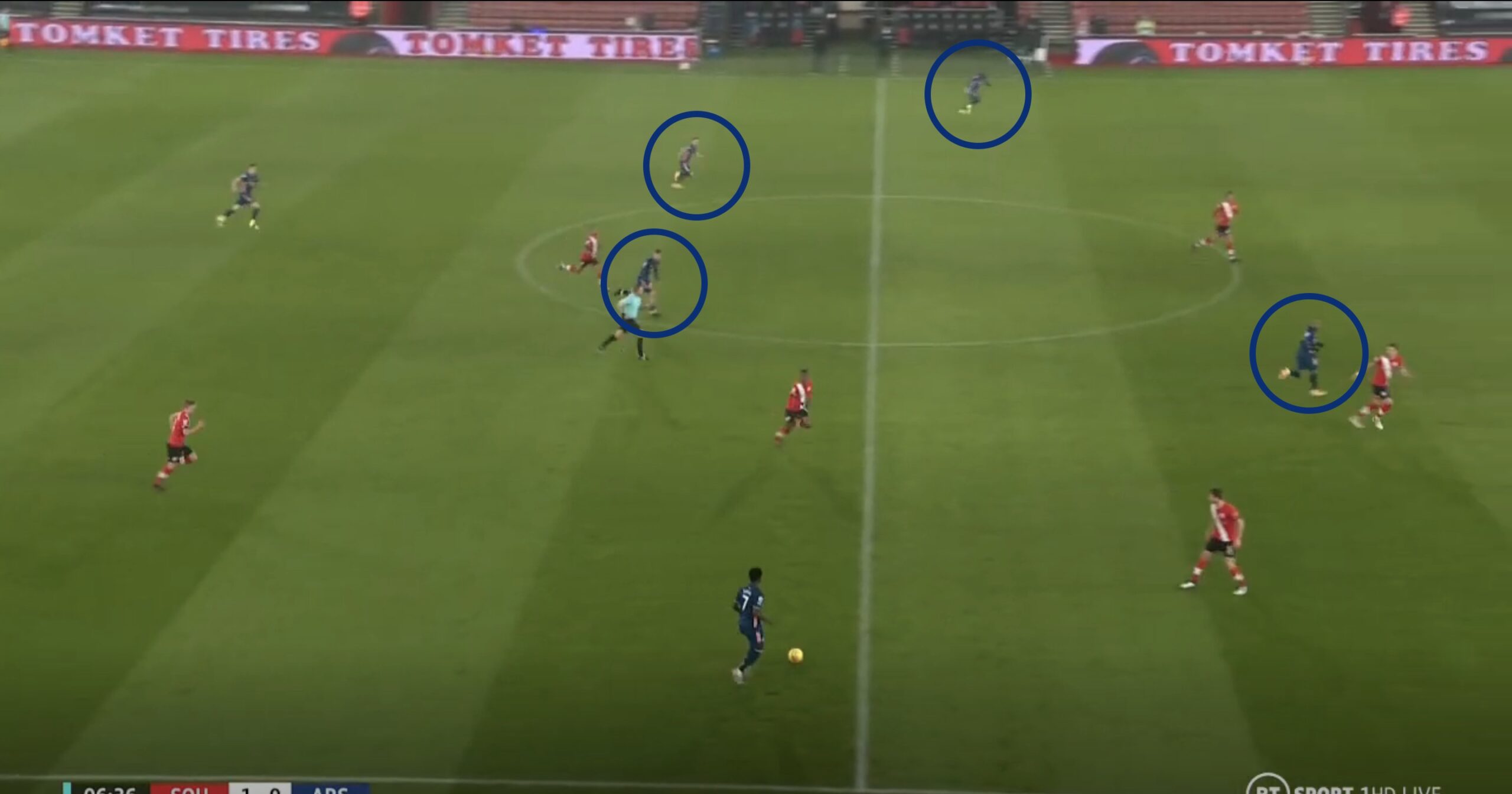 Arsenal switched the ball from one flank to the other once every 26.8 passes, compared to the team’s season average of one switch of play every 40.5 passes. The only game with more switches from Arsenal all season was the previous league encounter with Southampton, which doesn’t seem like an accident at all, and not only exploited an inherent weakness against Saints’ narrow approach and negated aspects of their press but also meant Arsenal could attack two back-up full-backs.

Movement was again important in wide areas and, though he had a quieter game, we saw what Emile Smith Rowe adds to the team with his inclination to rotate with his team-mates. Rather than standing in position, the 20-year-old looks to drop deep to allow team-mates to move into the spaces he leaves behind him.

His superb understanding of where to move almost forces other players to shift into the large gaps he creates, in turn creating triangles for quick combinations. 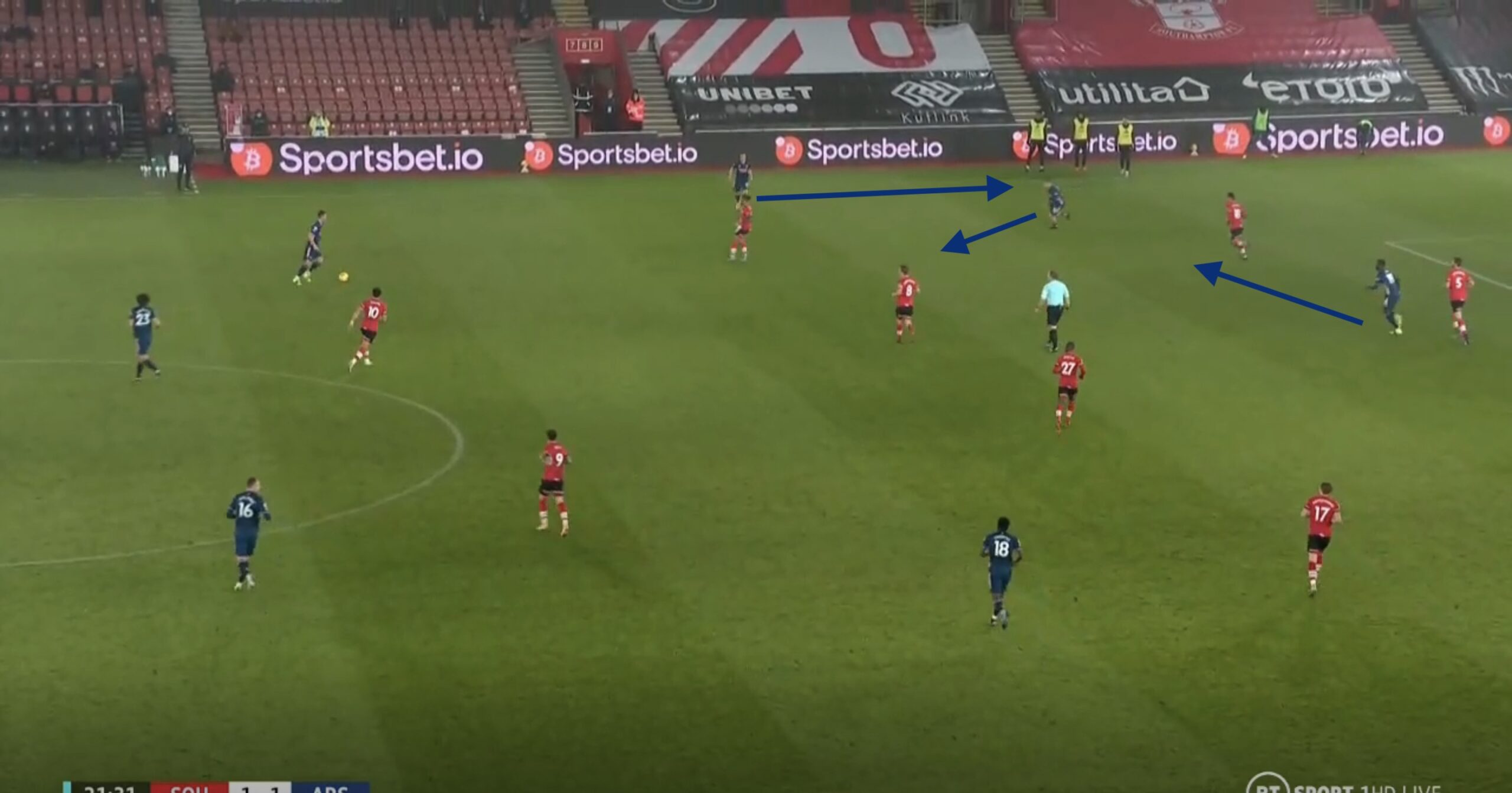 Looking to play decisively and directly was a factor in the opening goal and Lacazette’s chance, but it was also something that we saw from more established possession, too. Saints like to press high and Arsenal could stretch that high defensive line by having a consistent threat in behind.

Lacazette in particular did a fine job of attracting defenders, prompting the likes of Saka and Smith Rowe to burst in behind the striker, whether he was the one on the ball or not. When he was on the ball, he repeatedly looked to spin and release it early for Saka and it was no accident that this is how the second goal came about. 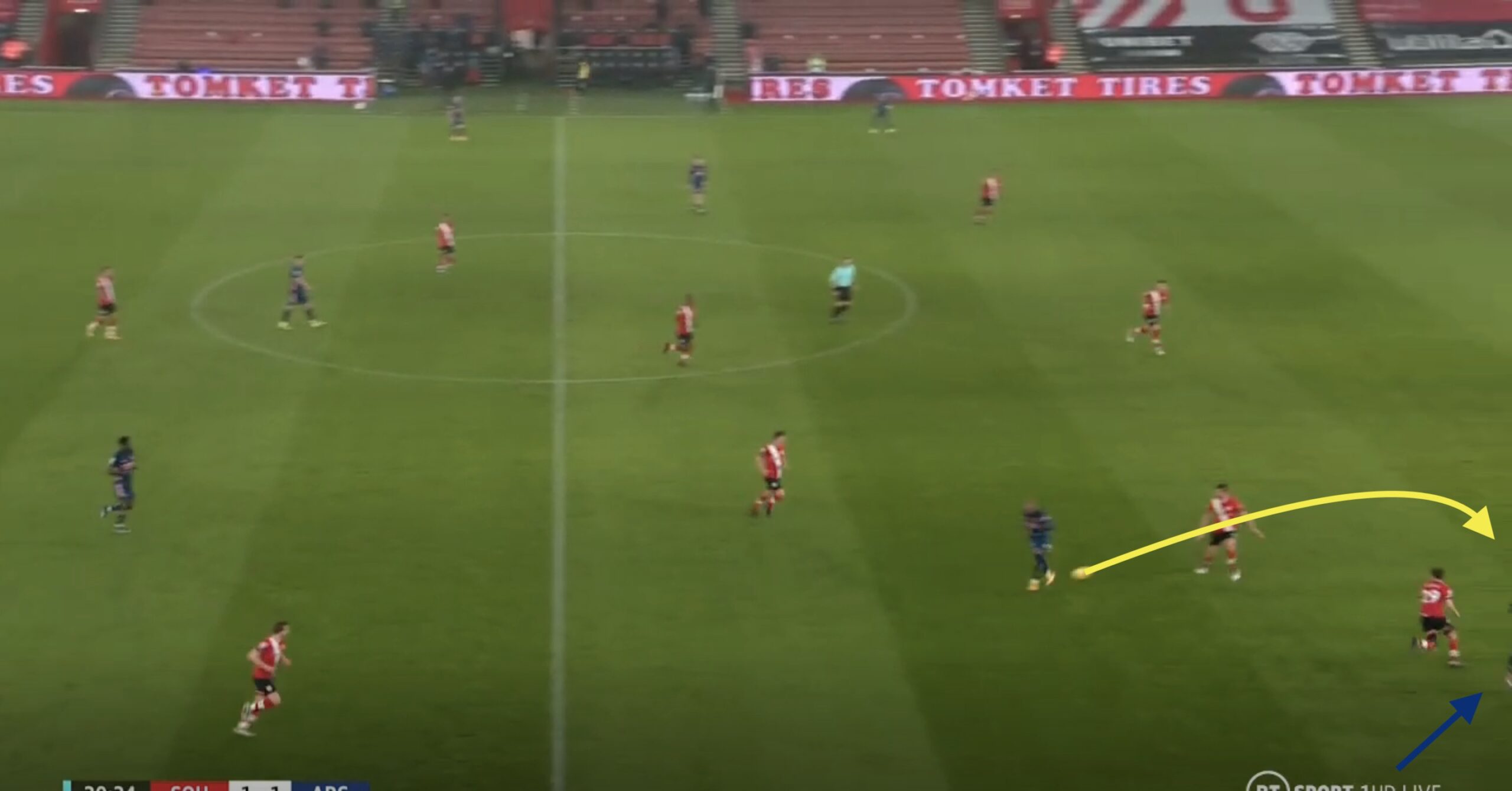 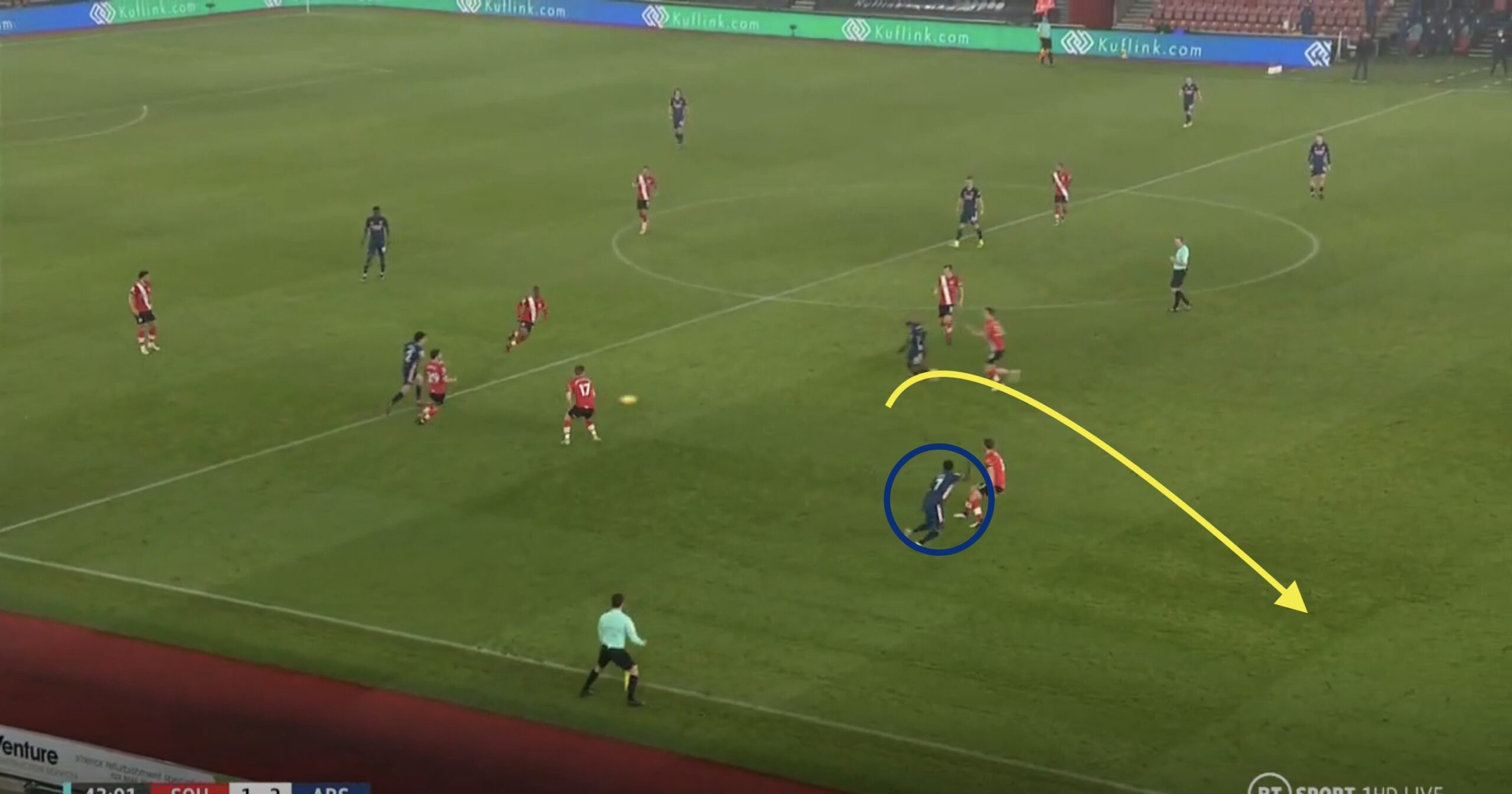 Attracting Saints to one side of the pitch and then switching the ball was crucial throughout, and we saw Cedric Soares put in his best display in an Arsenal shirt so far against his former club.

The Portuguese completed just over half of his passes, certainly not a figure you’d expect, but Arsenal registered their second lowest pass completion in a Premier League game all season. But not through sloppiness, but risk aversion. Rather than lose the ball in their own third, the Arsenal players played it long. Sometimes to avoid danger, sometimes to create it.

Perhaps Cedric just understood the importance of this approach more than others, because of his knowledge of the opposition. The Portuguese didn’t dally in possession, aware of how Saints like to apply pressure, and looked to go long. But it wasn’t kick and rush. They were carefully weighted passes for the runners beyond Lacazette. 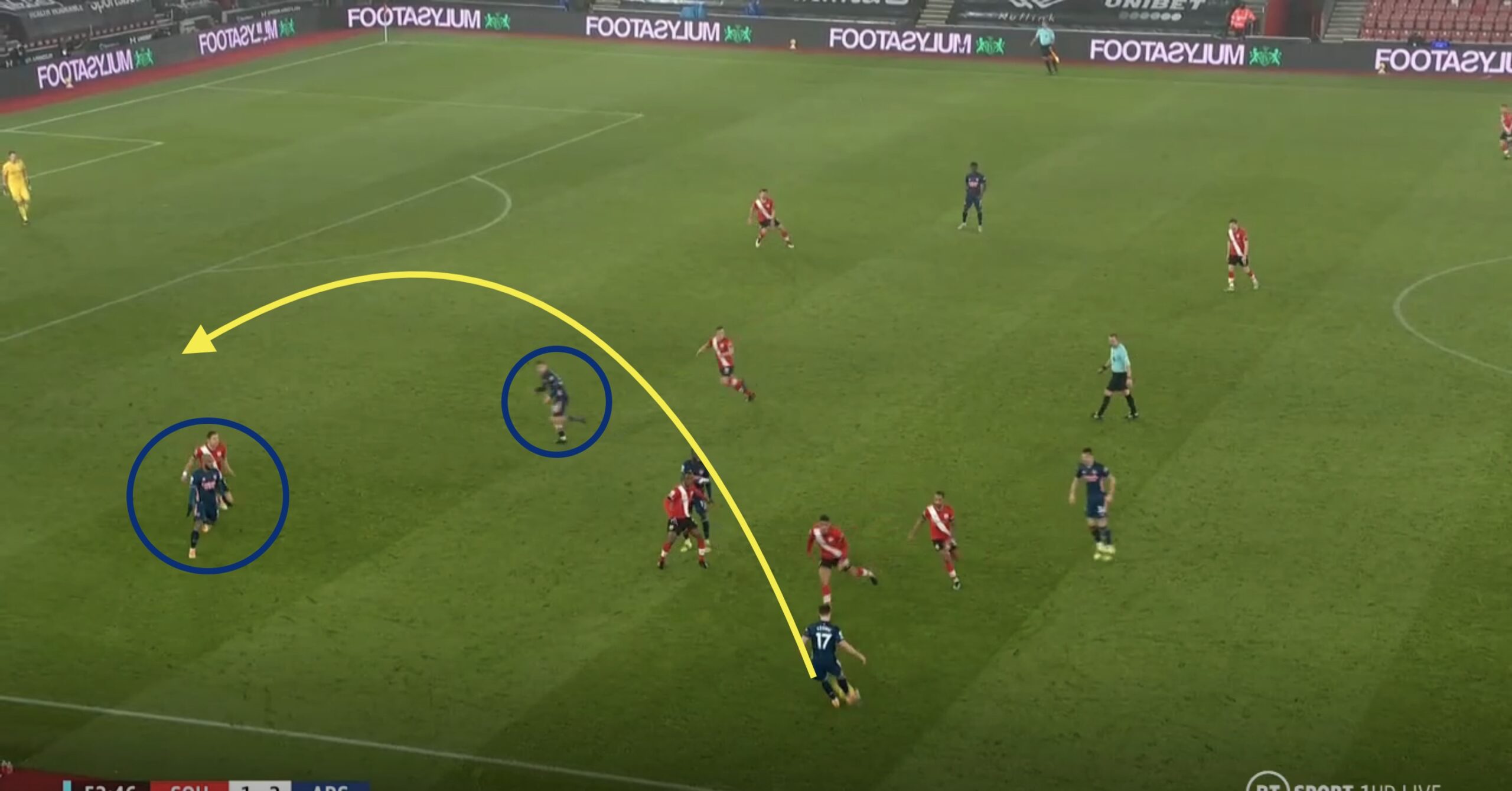 And, crucially given Saints narrow width, he was quick to switch the ball when the opportunity arose. 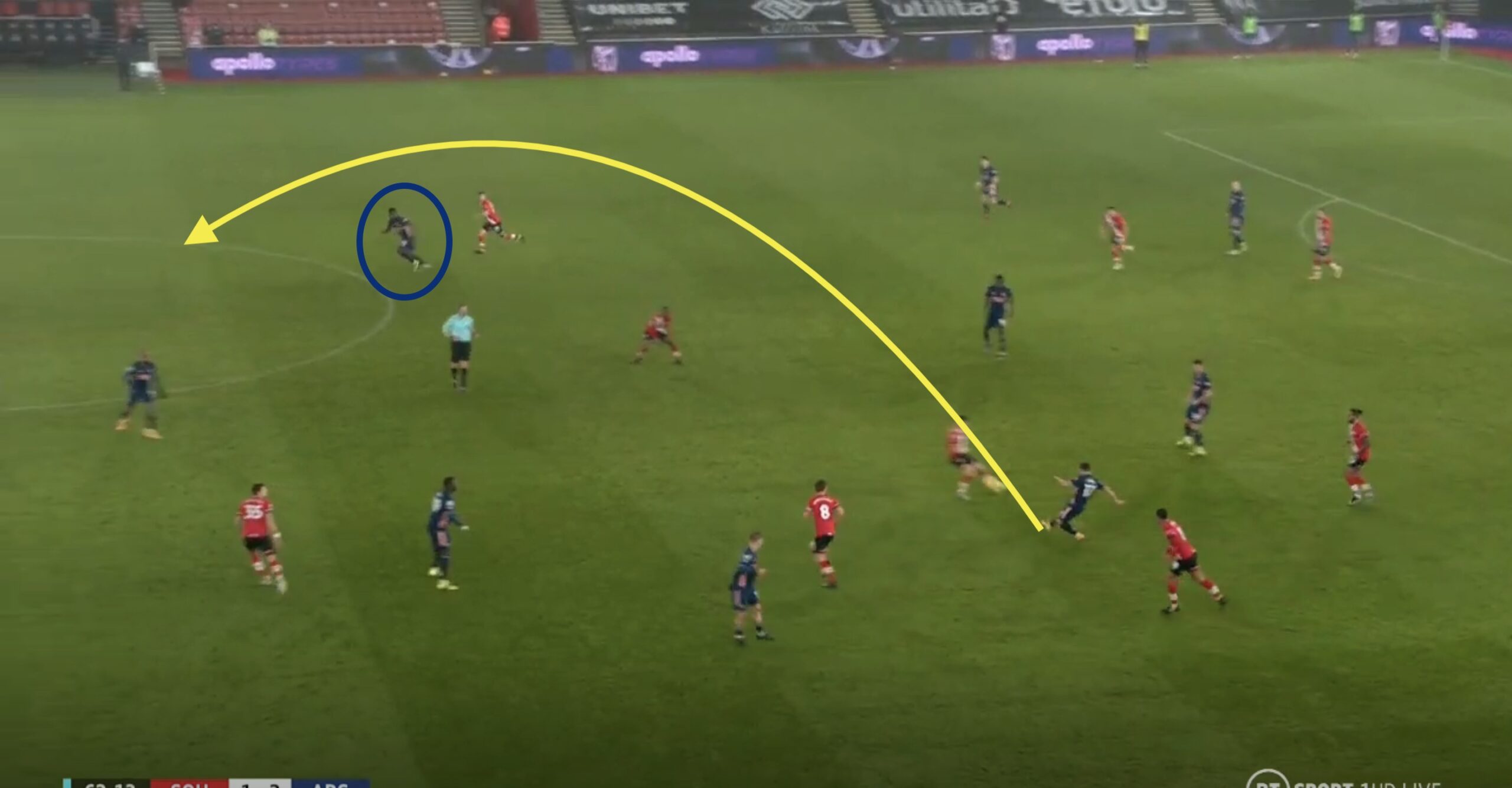 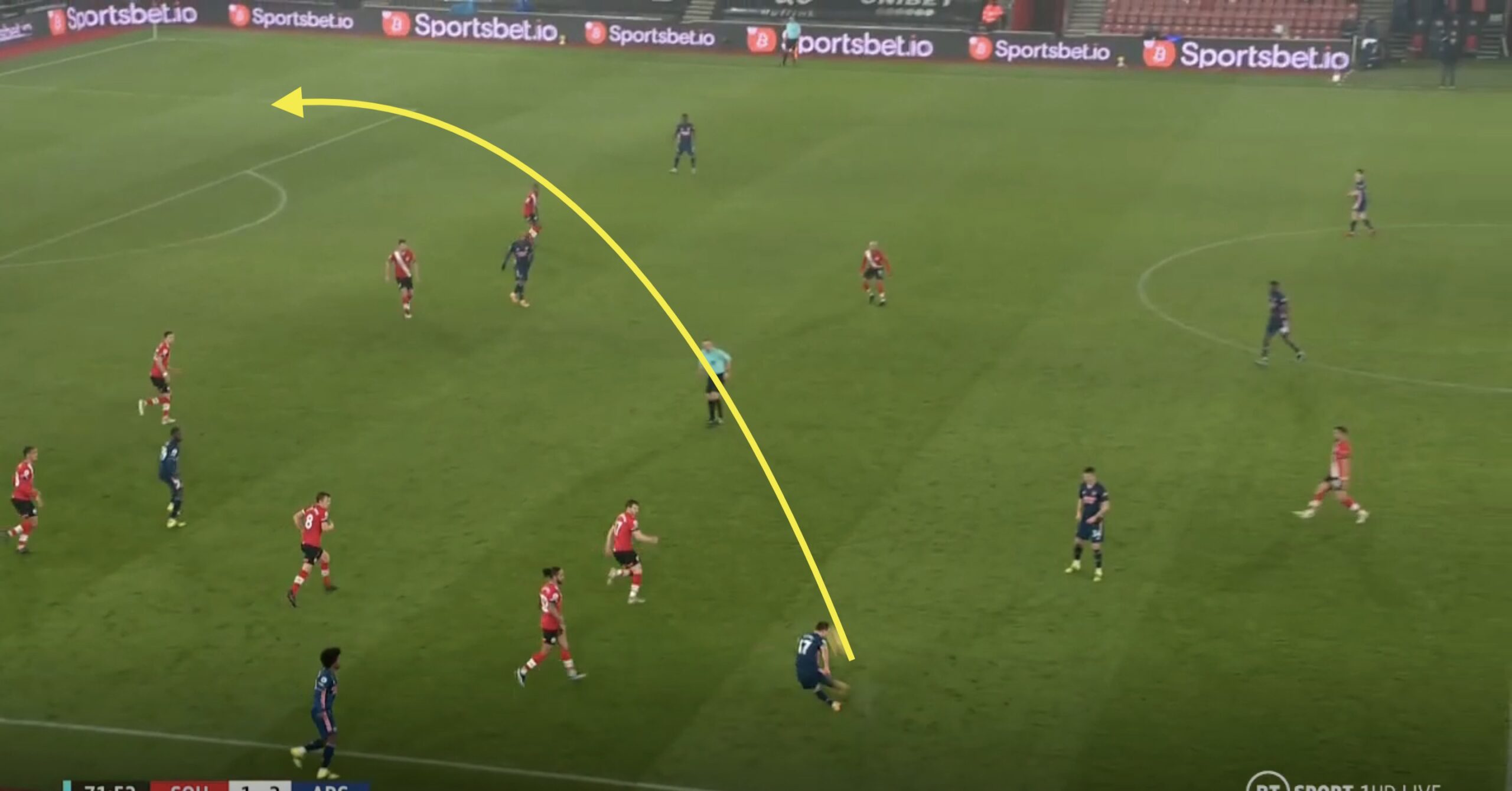 The picture above is, of course, his fantastic ball to Saka leading up to the third goal. That’s now 16 points from the last 18 available and Arsenal are looking upwards again, instead of worrying who is below them.

It’s maybe fitting that this performance, with high pressing and low pass completion, rounded off this run. We headed into it discussing whether Mikel Arteta was too stubborn, whether he needed to allow more ‘jazz’ on the field and allow his players to express themselves. But at St Mary’s, where he first moved to a back three last season, he had his players press higher and play longer than usual.

The argument that he was trying to drill his very own “non-negotiables” into his players before loosening the strings a bit has gathered more than a little credit since Christmas and we’re now seeing a decent balance between what we think might be Arteta’s ideals, the natural game of his players, and catering for the opposition.

Things are looking up again.

The post Tactics Column: Arteta and Arsenal put the pressure on appeared first on Arseblog … an Arsenal blog.