There has been plenty of chatter about whether or not Mikel Arteta does ‘too much’ with his players, if his instructions should allow more wiggle room, and if Arsenal would be improved if he took off the Arsene Wenger-like handbrake. It was Ole Gunnar Solskjaer’s Manchester United, though, who looked more like one of the late Wenger sides at Old Trafford on Sunday: pretty helpless against a coach and a team that actually had a plan.

Arteta is sure to face criticism again as the season progresses but, as far as coaching goes, Sunday was a fine example of why you’d rather have too much of it than not enough.

We’ve all heard someone talk about how Arsenal’s build-up play is so neatly choreographed but the same could be said of the team’s pressing at Old Trafford. An excellent plan was executed perfectly on Sunday, illustrated by this impressive stat from the Athletic’s Tom Worville at half-time.

With United lining up in a diamond, as they did against RB Leipzig last midweek, Arsenal looked to stifle any access into midfield. Alexandre Lacazette was crucial in this, sitting on United’s deepest midfield player so they couldn’t be played to. This was usually Fred but the Brazilian often dropped between his centre-backs (in contrast to Arsenal, who pushed Bernd Leno on between his centre-backs to create a numerical advantage) where he was no threat. When this happened, Lacazette simply cut off the next closest midfield option, usually Scott McTominay. 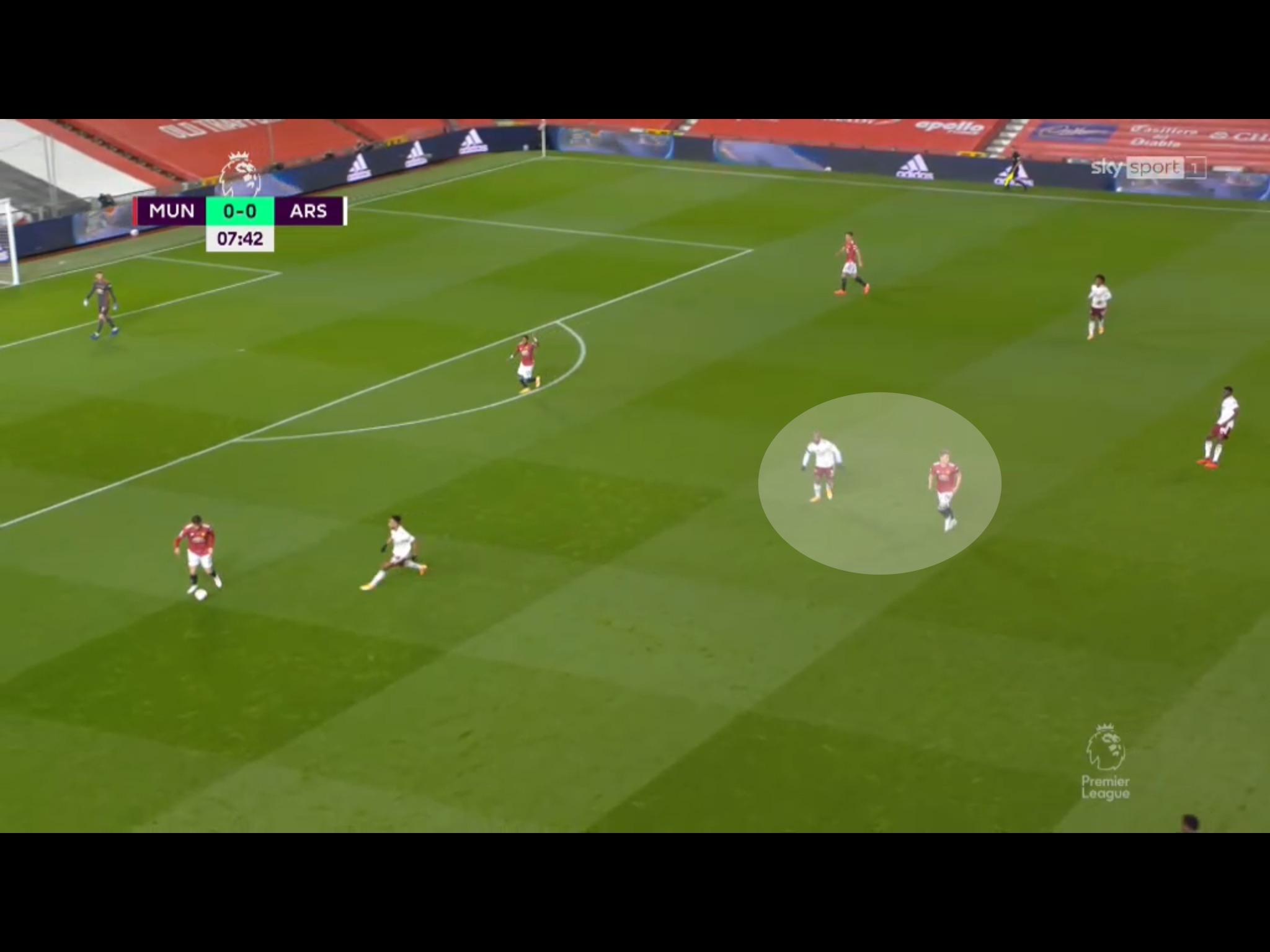 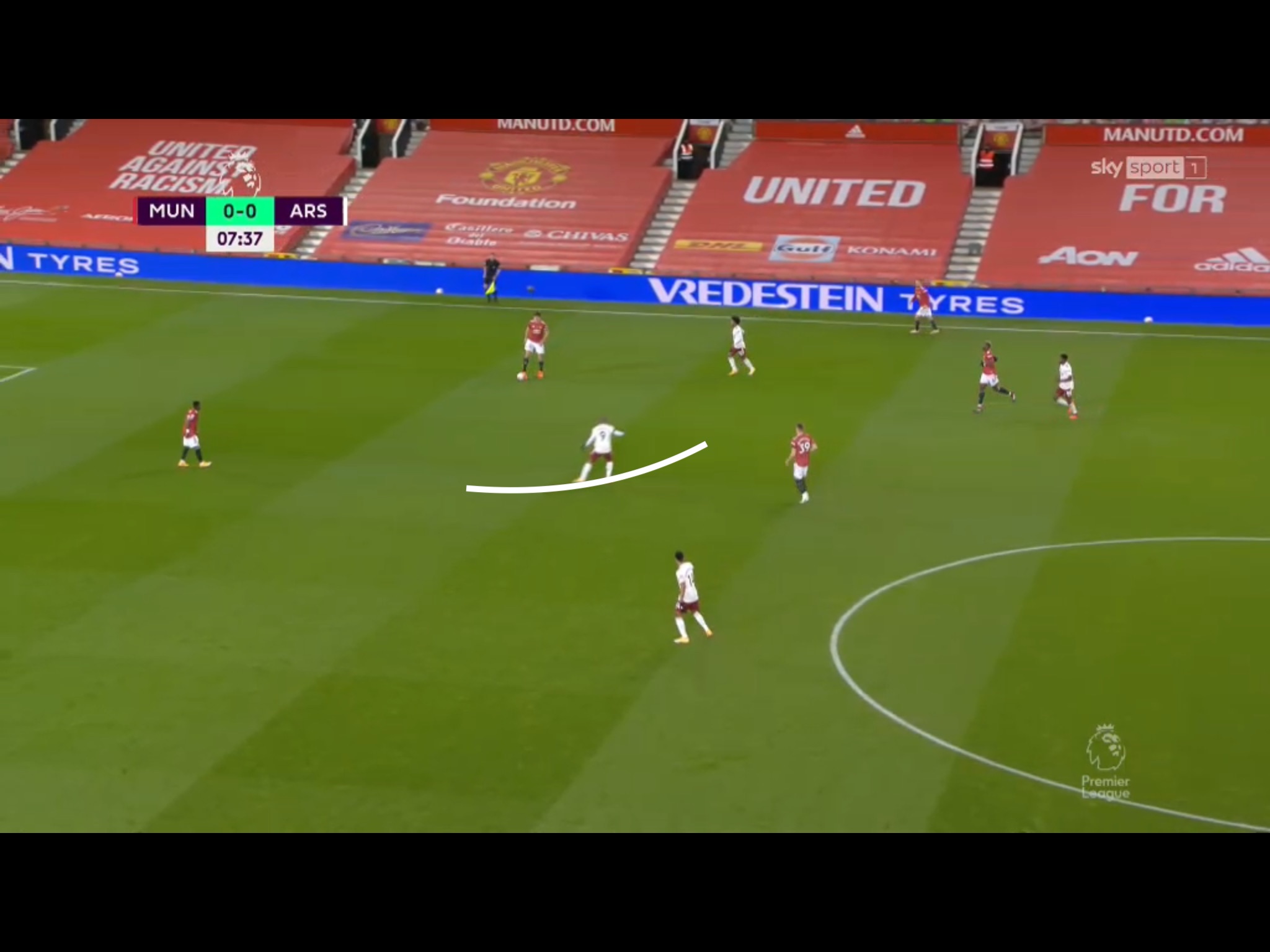 It wasn’t necessarily a high press in terms of making lots of challenges, but Arsenal simply cut off passing lanes and made it very difficult for a lacklustre United side to play any easy balls.

Willian and Pierre-Emerick Aubameyang would press the two United centre-backs, usually positioning themselves ahead of Lacazette, and bend their runs so passes out wide weren’t an option. From there, Arsenal man-marked.

Elneny was tasked with following Bruno Fernandes and Thomas Partey was stationed on Paul Pogba. Bellerin and Saka, at wing-back for Arteta, pushed up to challenge Shaw and Wan-Bissaka respectively. The latter was particularly sloppy on the ball, with Saka’s tenacity and intelligent positioning forcing him into a number of errors. 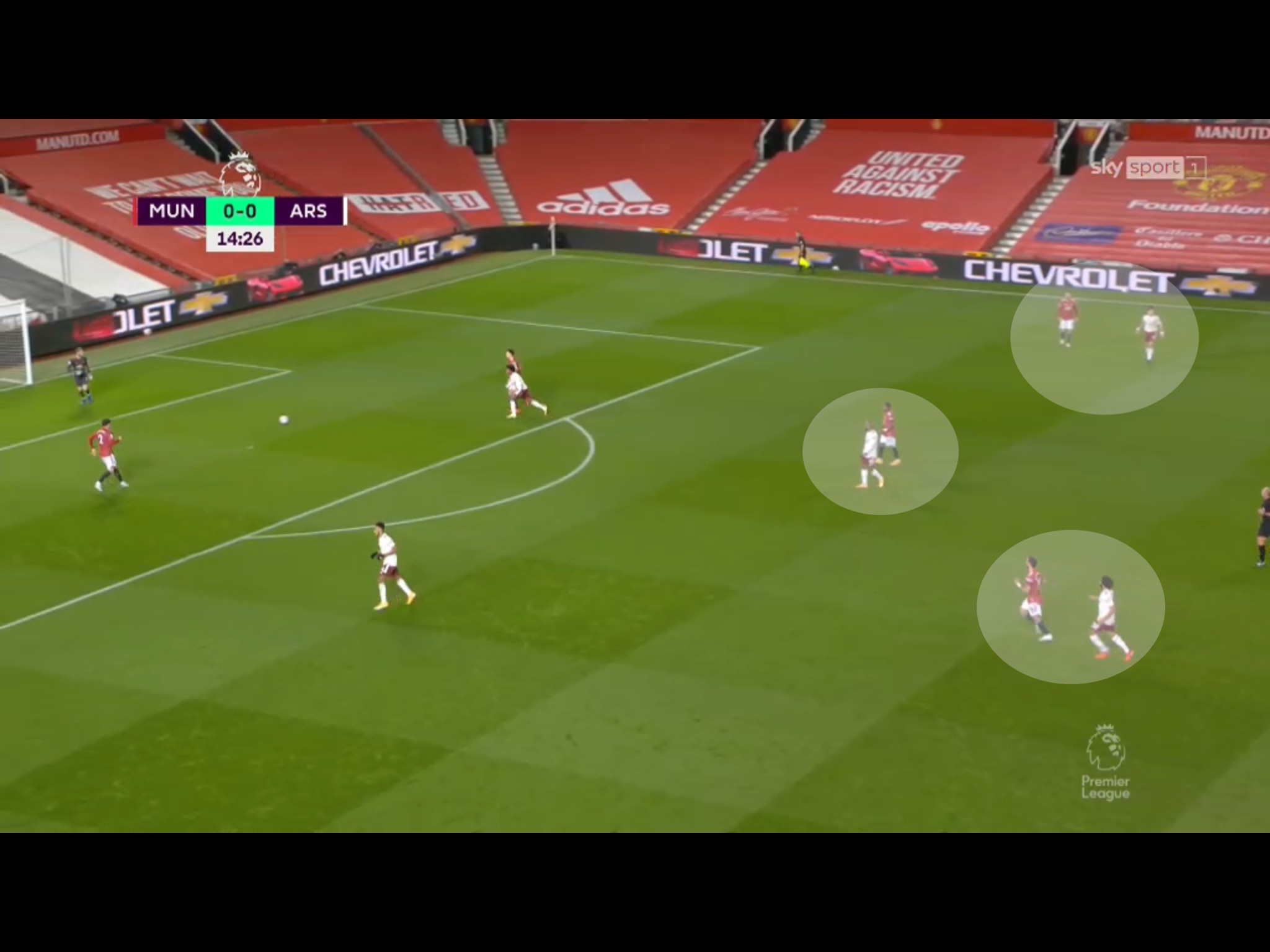 Arsenal’s press then required the centre-backs to play aggressively, which they did to great effect. With Rashford and Greenwood up front, Arsenal could have been forgiven for sitting off, afraid of their threat in behind, but Rob Holding, Gabriel, and Kieran Tierney engaged them high up the pitch, rarely letting them turn on the ball. Having the spare man, plus Bernd Leno behind them, allowed the Arsenal back-three to play aggressively without taking too many risks and justified Arteta’s decision to stick with the three-man backline.

This was a particularly impressive performance from Holding and Gabriel, who weren’t fazed by their early yellow cards and kept nipping at the heels of the United front two. 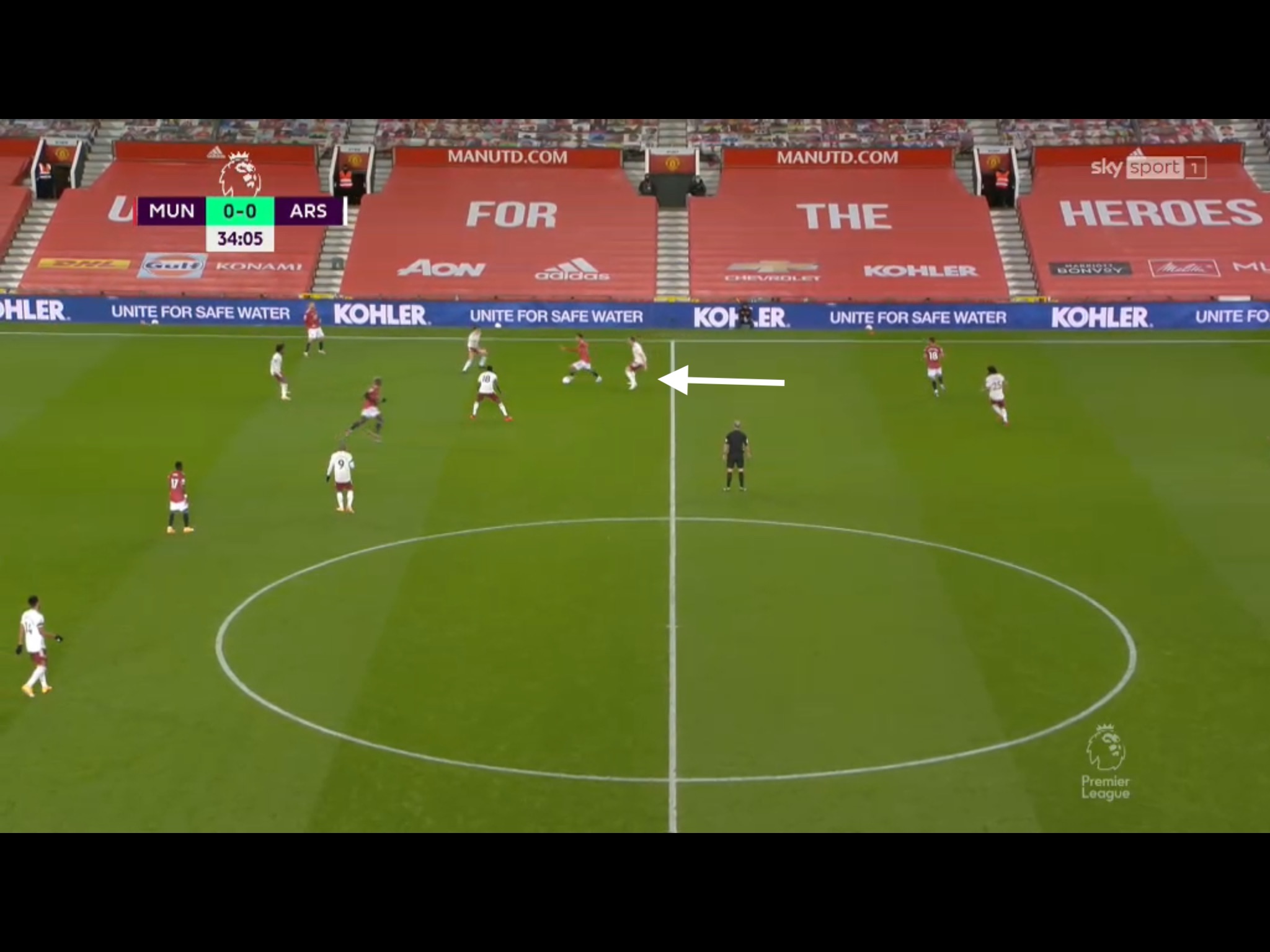 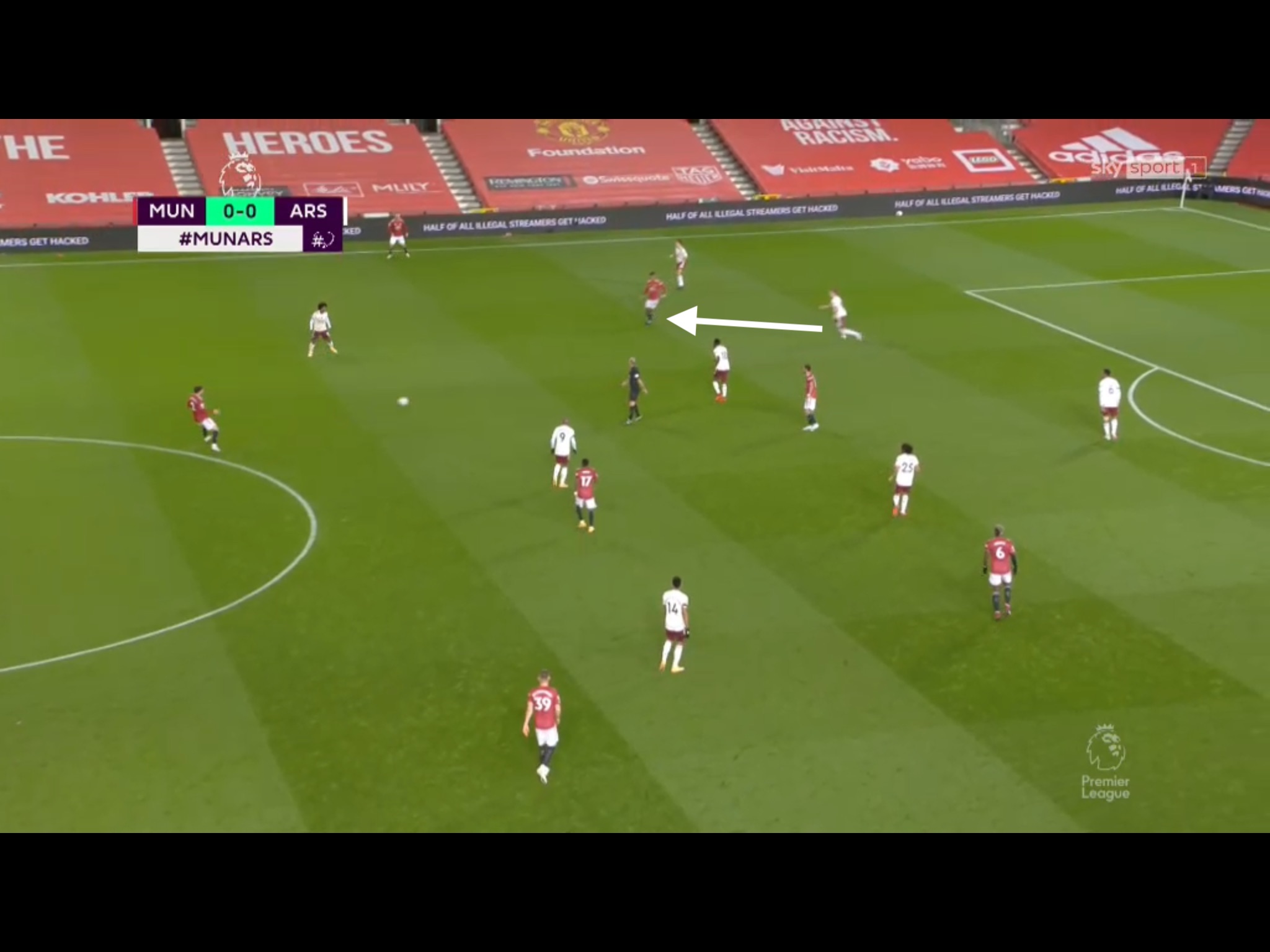 The impact of playing a back five can help Arsenal to retain that aggression when  they do find themselves on the edge of their own box, as a defender can still push out if their presence is needed in front of the backline, safe in the knowledge that the player outside him can shuffle across and plug any gaps. 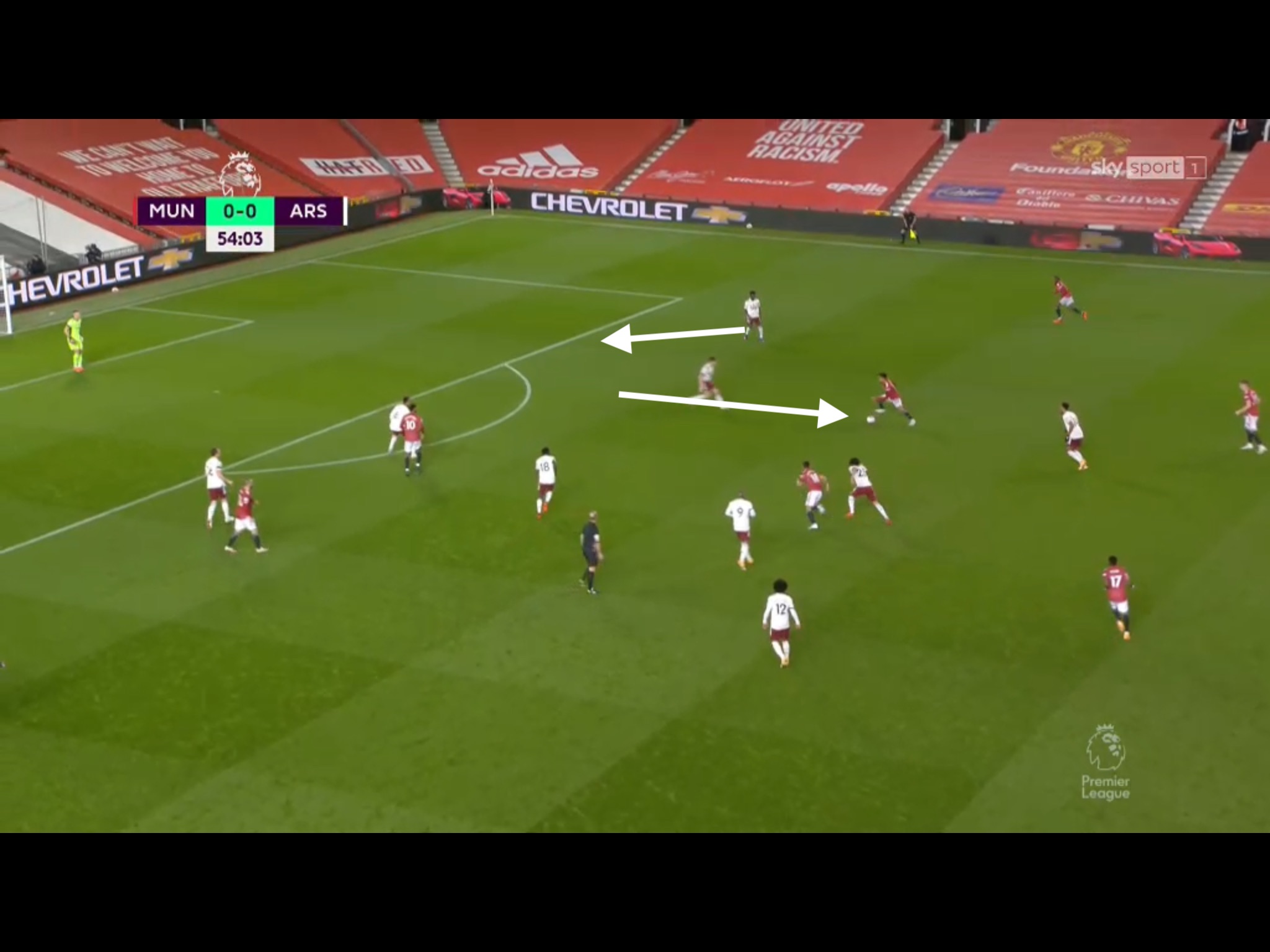 Arteta’s side were also the far more impressive team when it came to having the ball at the back themselves.

Arsenal repeated played through United’s weak press with ease. Elneny was constantly under instruction from the boss and carried out his role superbly. The Egyptian was brave  to receive the ball in tricky areas, always on hand to offer an option, and  then moved the ball quickly when he did receive it. The mixture of calmness and willingness to burst into space made this the perfect midfield pair against a team that wanted to press but didn’t really know how to.

Arsenal used Leno smartly (why play with 10 when you can play with 11?) to help outnumber the disorganised United press and, unlike Fred, Elneny actually moved to receive the ball, rather than just standing between the two centre-backs. The narrow United front three (the strikers split when pressing, with Bruno Fernandes slotting in between them) weren’t alert to the movement of Elneny (or occasionally Partey) dropping in and Arsenal comfortably moved the ball around before finding a pass to the space on the flanks or driving through the huge space in midfield. 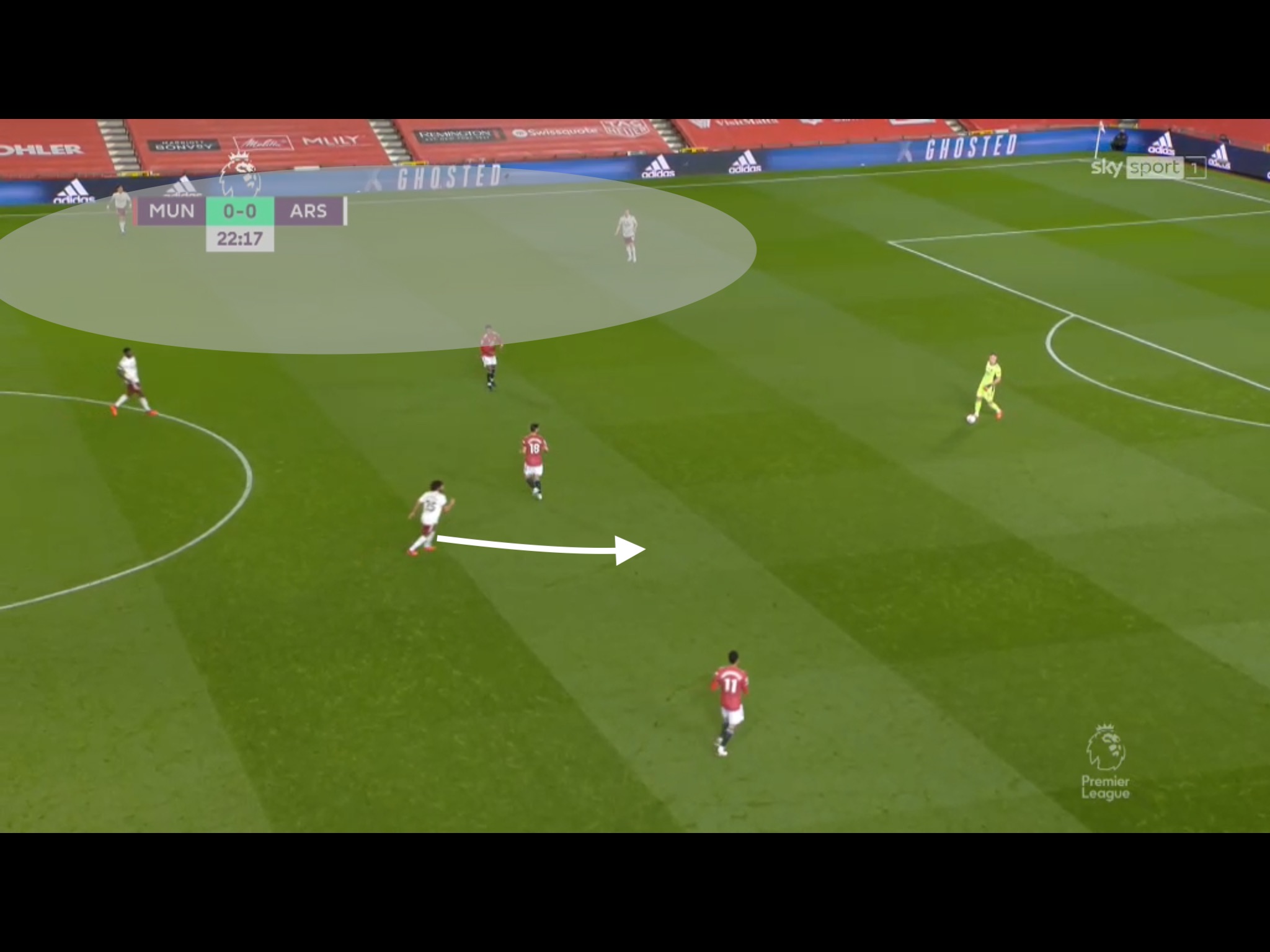 With Rashford and Greenwood so central and Pogba and McTominay not joining in, Arsenal played around them with ease. When those midfielders did push on, they had extra jobs as Saka or Willian dropped in.

Arsenal outnumbered United in every area, either finding huge space to turn and move into or having easy passing options to combine with to launch attacks. 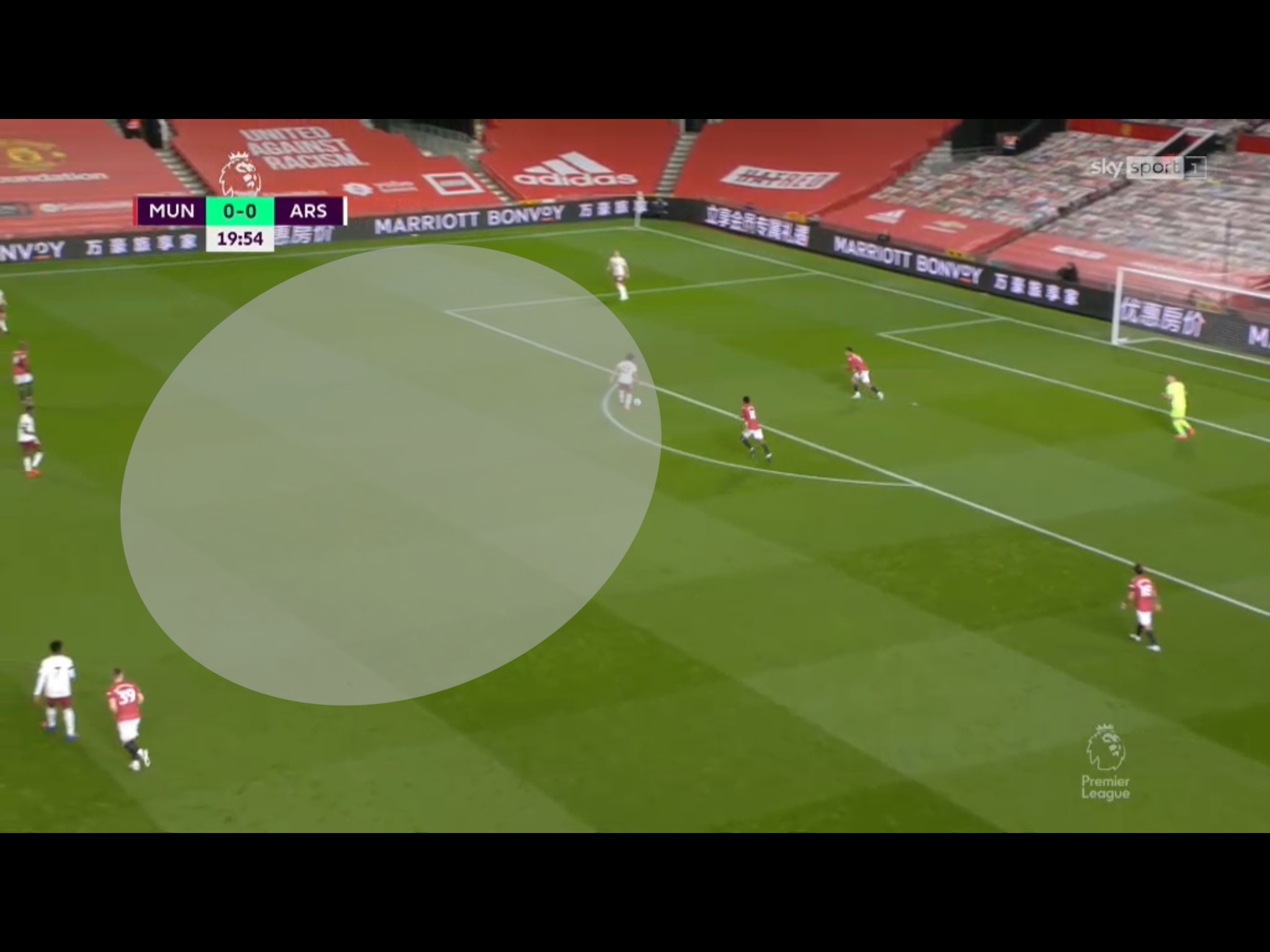 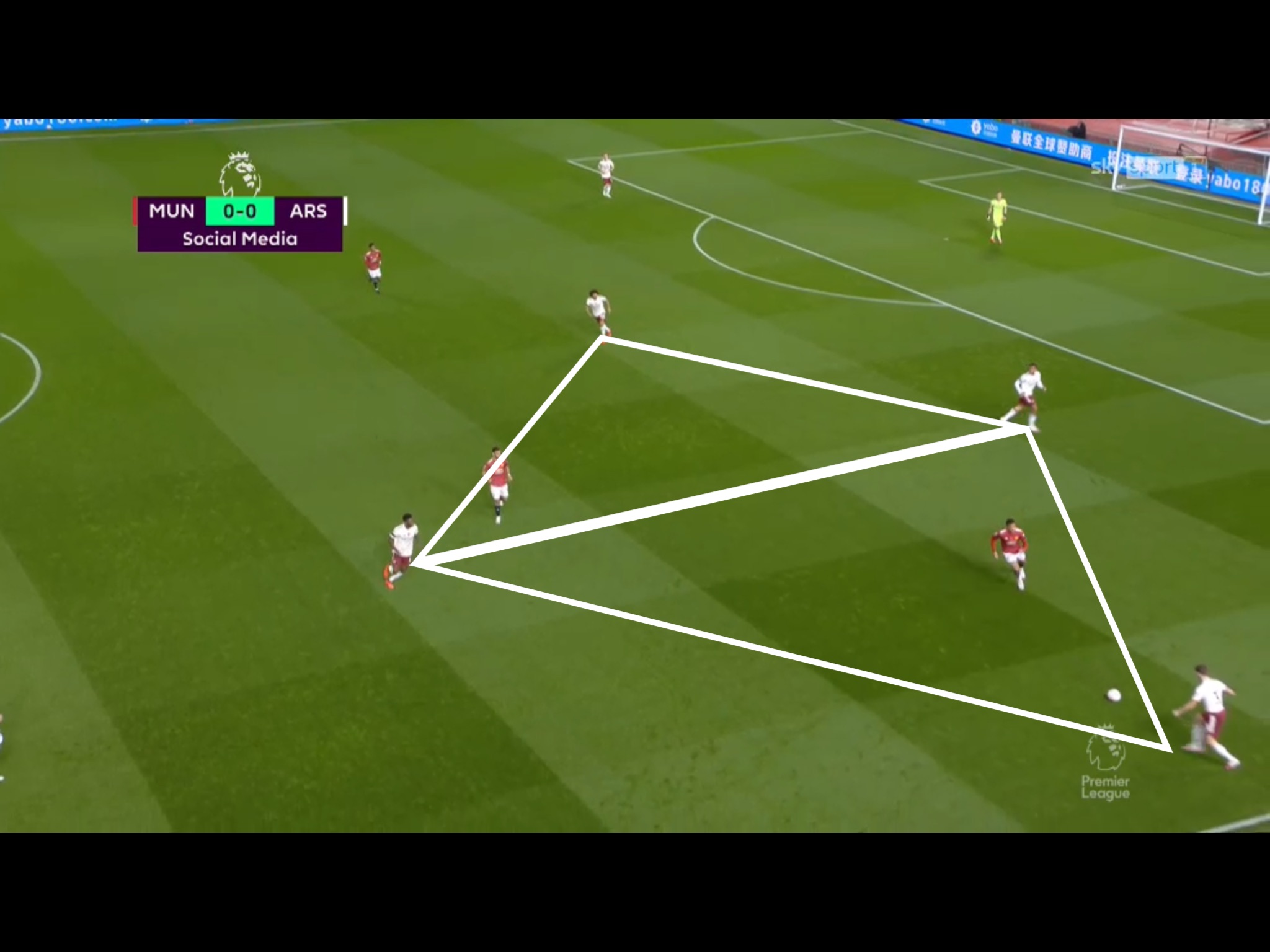 There was a clear difference between the sides and their organisation that became clear whenever that first line of pressing was beaten. If and when United managed it, there was always another Arsenal player pressuring the man on the ball. When Arsenal did it, they had plenty of options in space to play to. 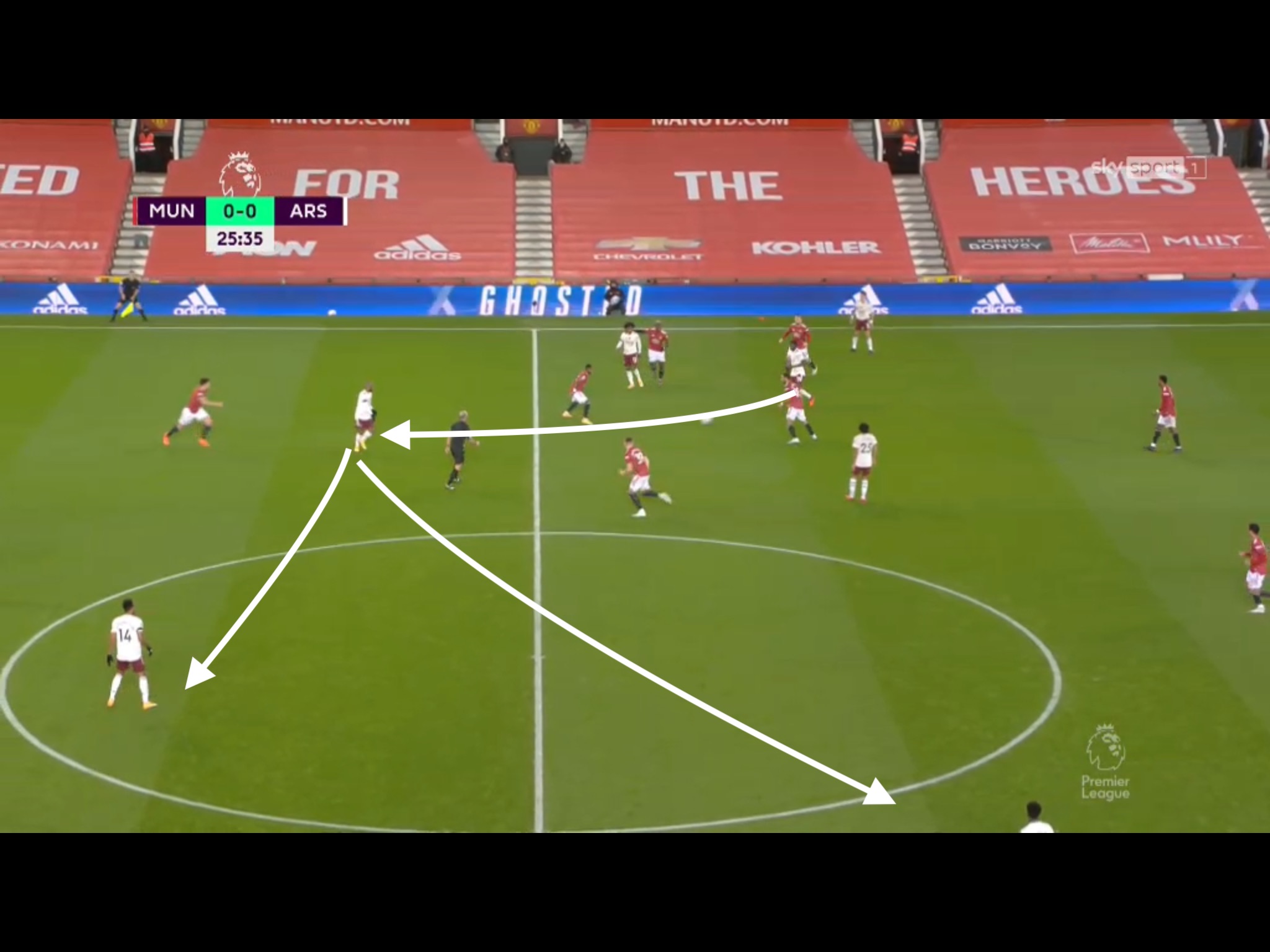 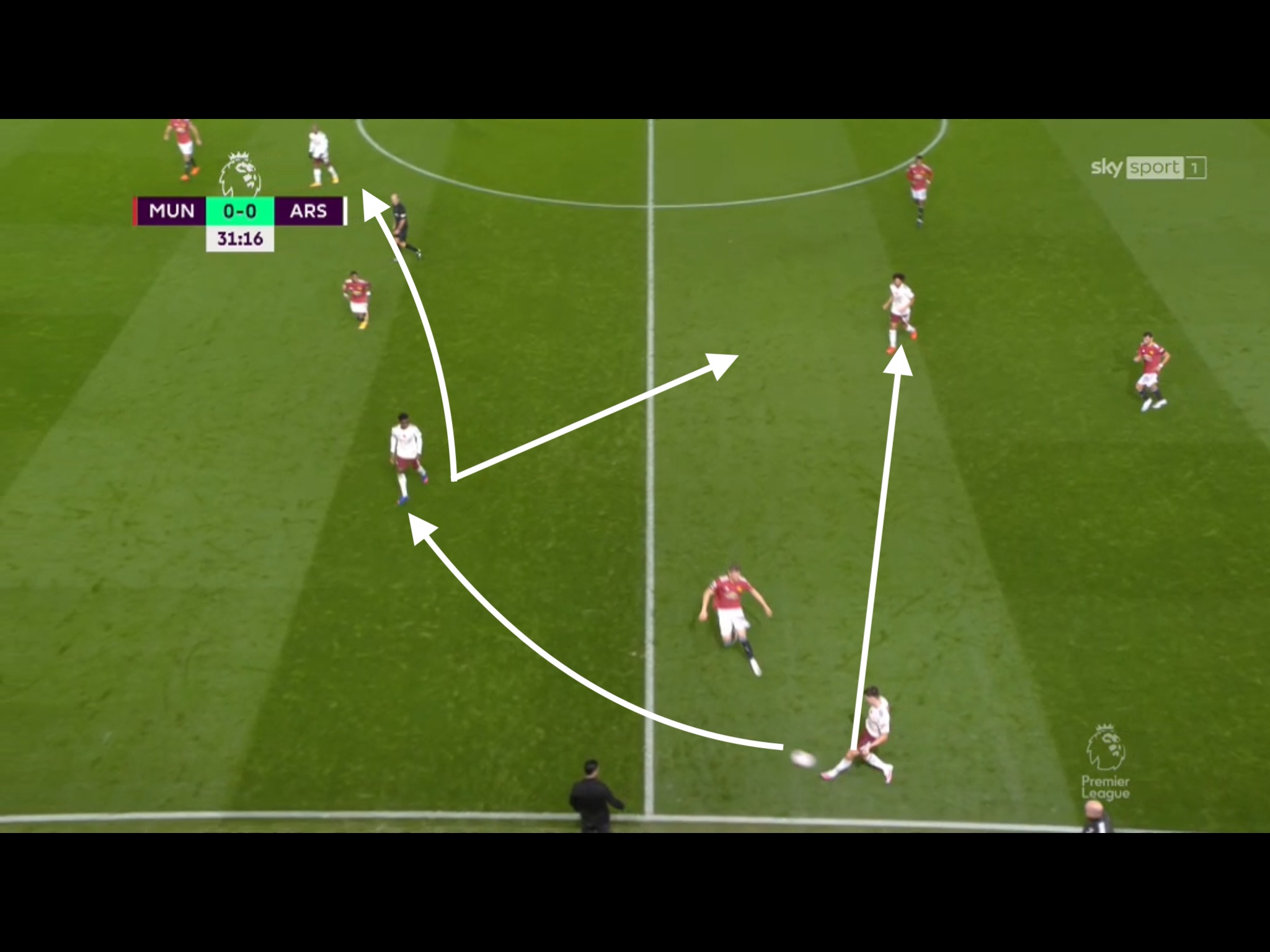 The gaps between the pressing United players and those left back on the halfway line was laughable at times, especially when they were struggling to stop Arsenal’s easy route out. Their change from their 4-3-3 press to a 4-2-3-1, giving them an extra man to press with, initially saw Arsenal struggle to find an easy pass out in the second half. However, that huge gap in the middle of the pitch remained. 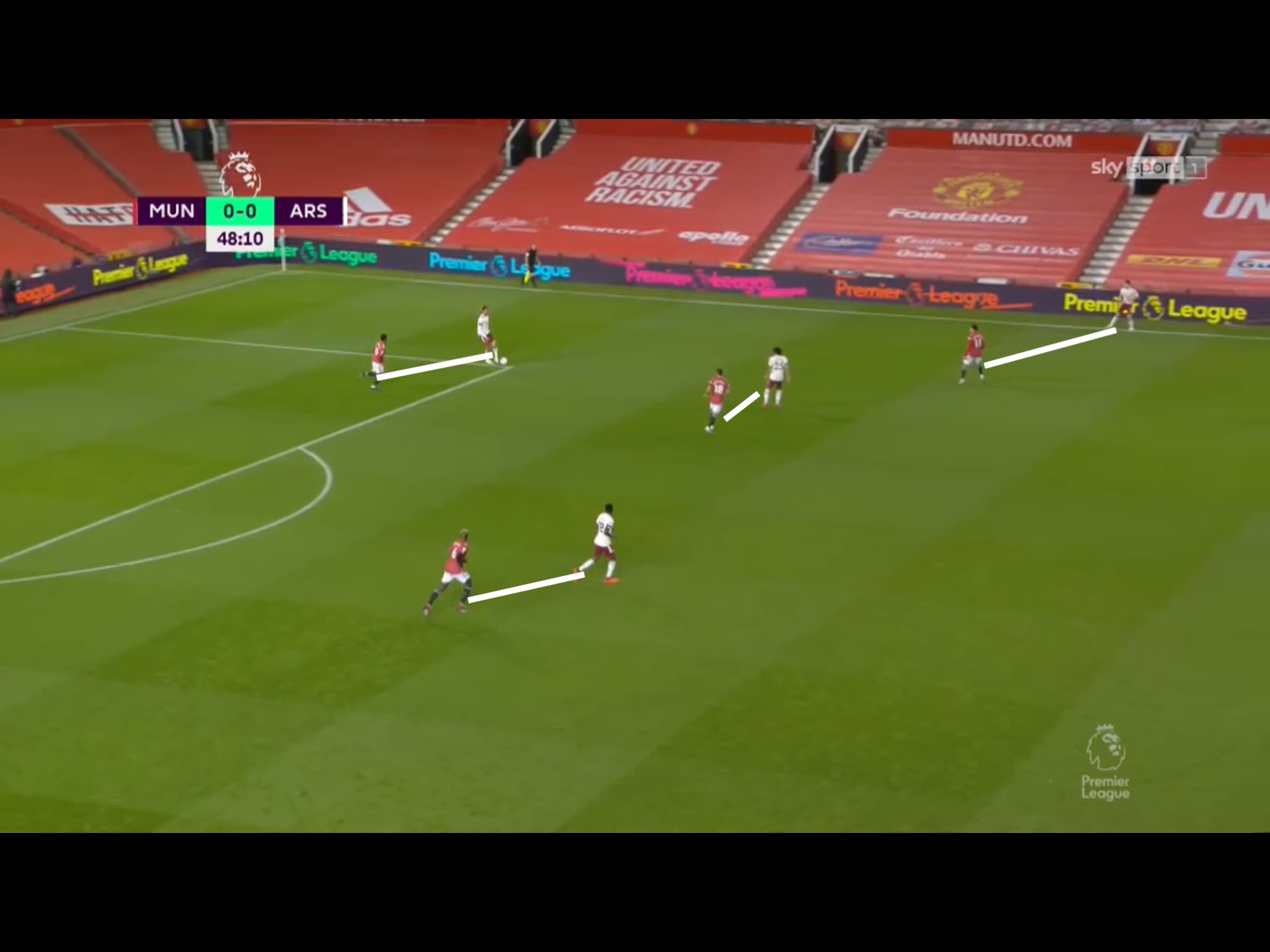 And Arsenal soon got to grips with the new shape, outnumbering the press again and finding that space behind the frontline with relative ease. 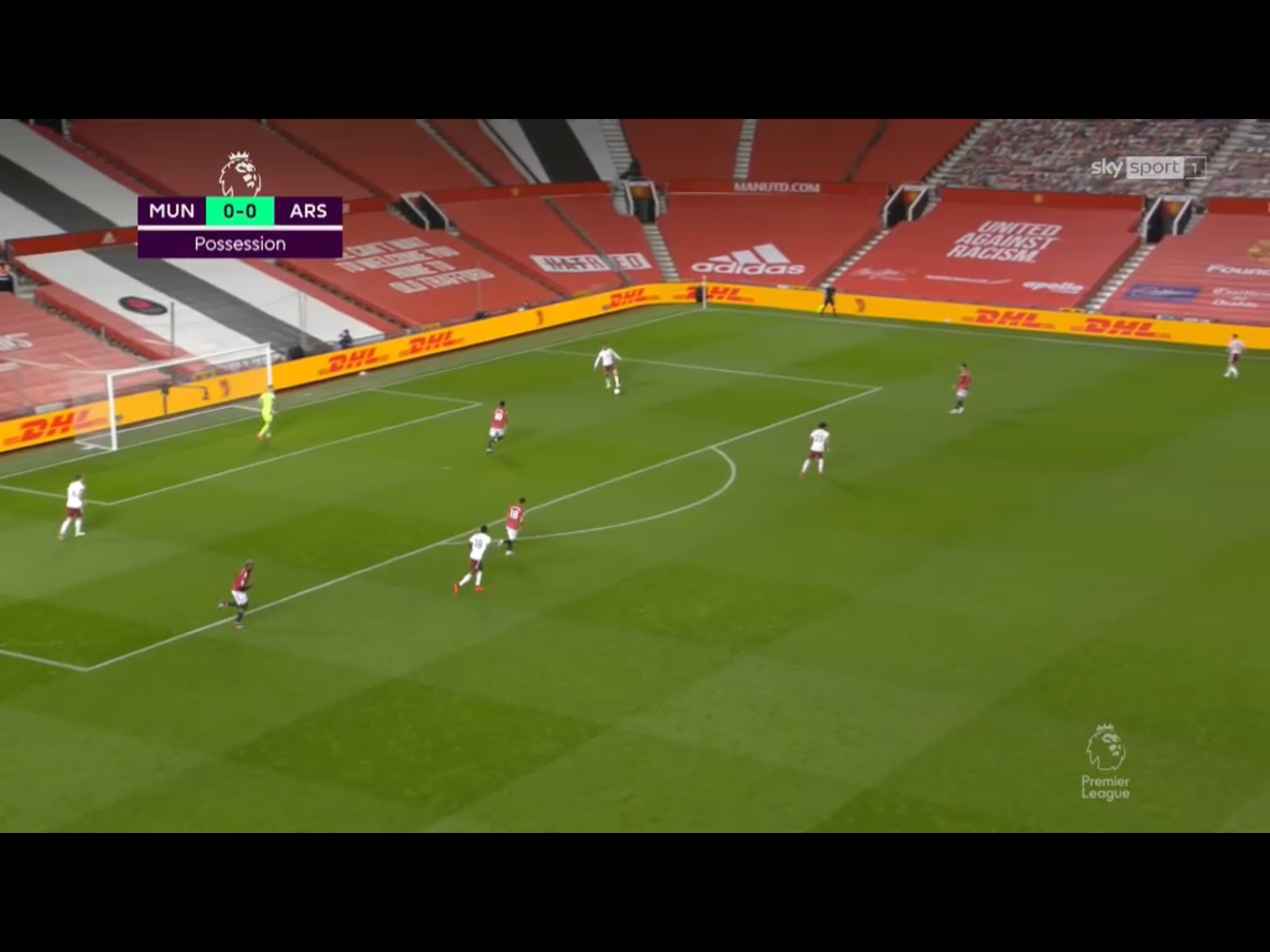 Pogba’s move out wide as United switched to a 4-2-3-1 did lead to some confusion early in the second half and shackled Arsenal’s ability to press higher up the pitch. With Bellerin preoccupied by Pogba, Willian had to track Shaw and could no longer press Maguire. Partey’s man-marking job on Pogba was effective in the first half and, while Elneny continued to man-mark Fernandes, Arsenal could no longer outnumber United on the wings. 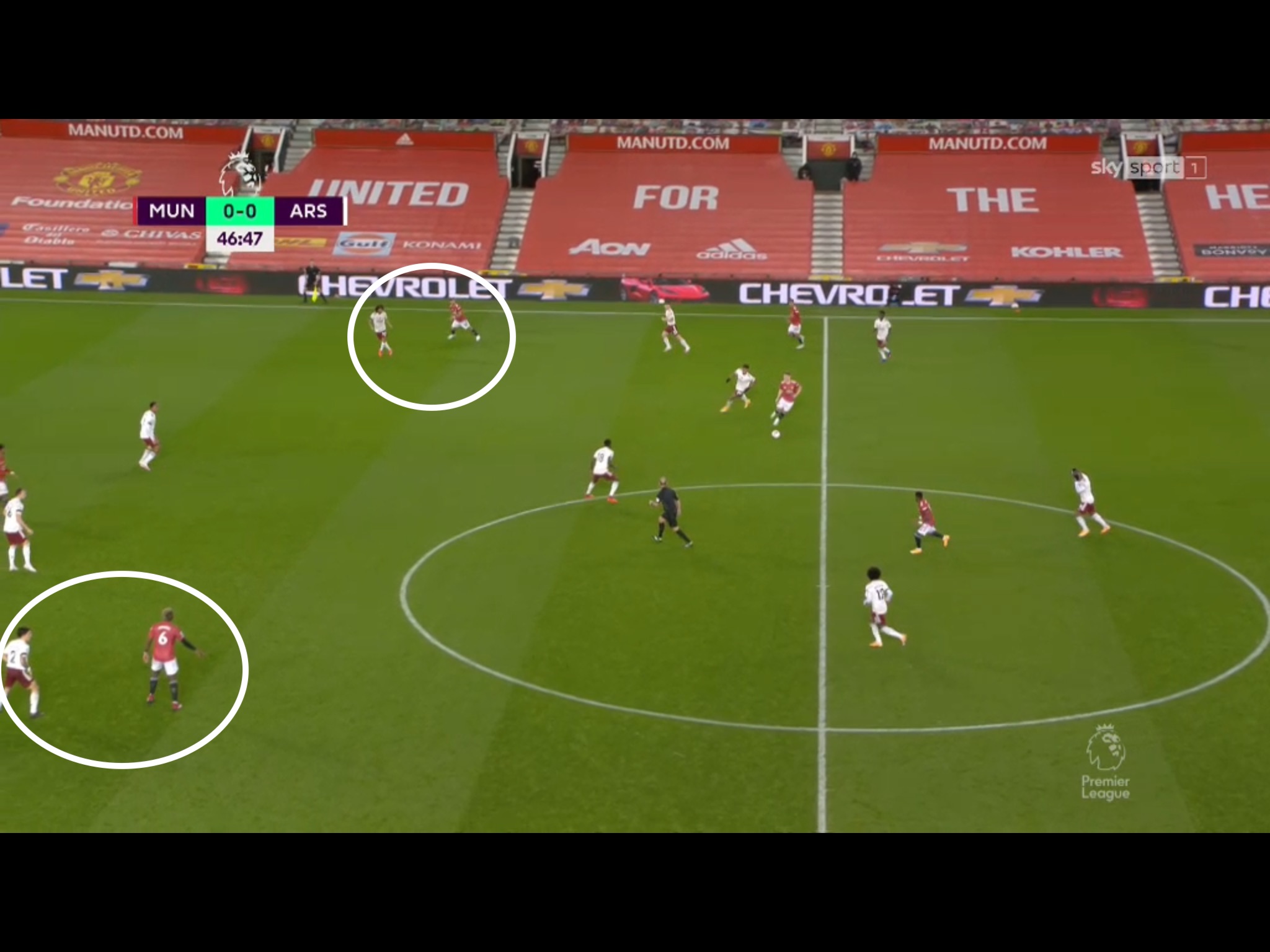 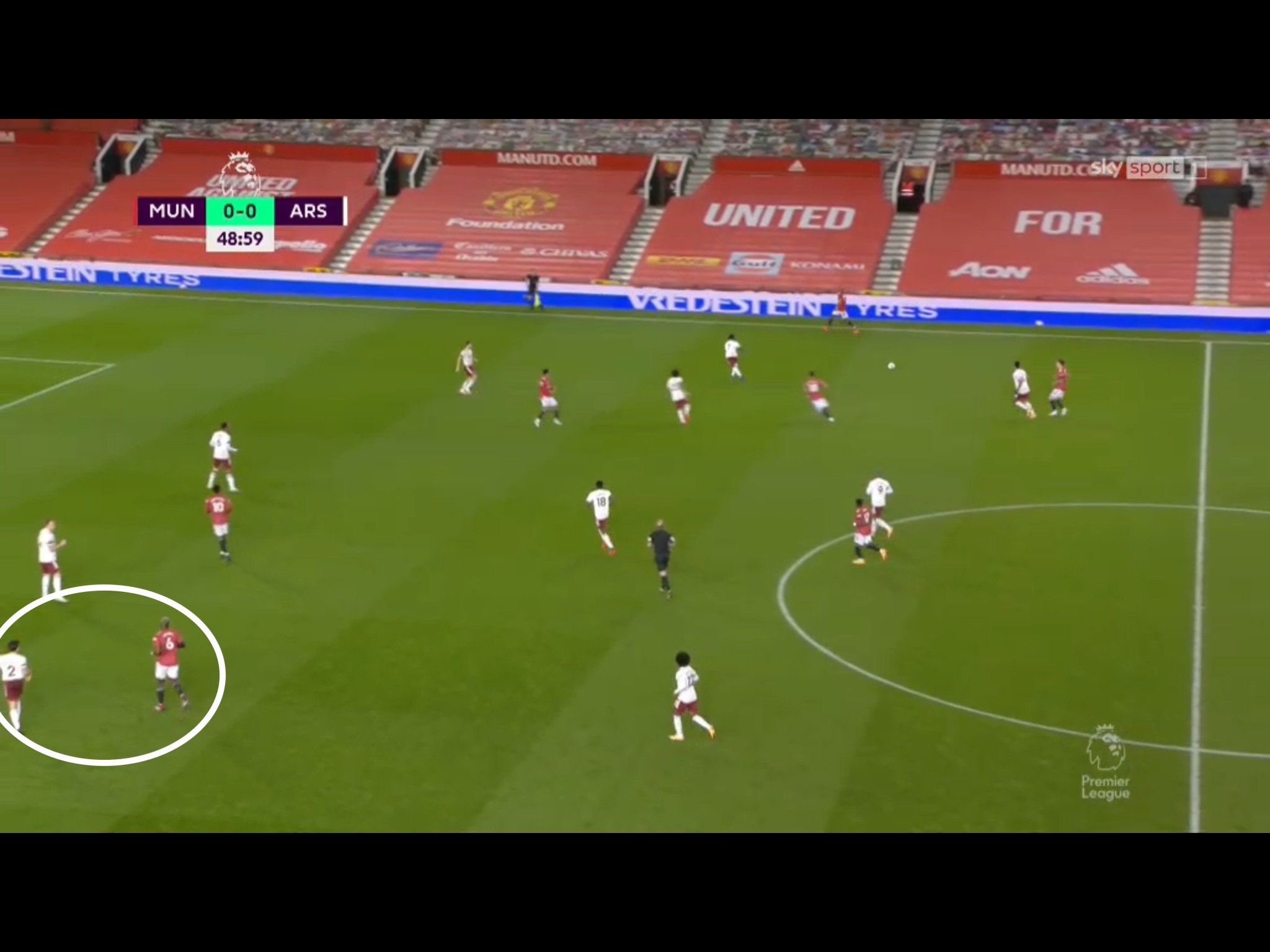 But the team were brave and responded well. After about 10 minutes they managed to push on. Bellerin dealt with Pogba well in the Arsenal third and was helped by Holding at times, leaving Gabriel, Tierney, and Saka with Rashford and Greenwood.

More at ease with the change, Arsenal managed to press and wrestle back control  once again, with Partey covering Pogba when he came inside or dropped deeper for the ball and Bellerin resuming his role of pressing Shaw. 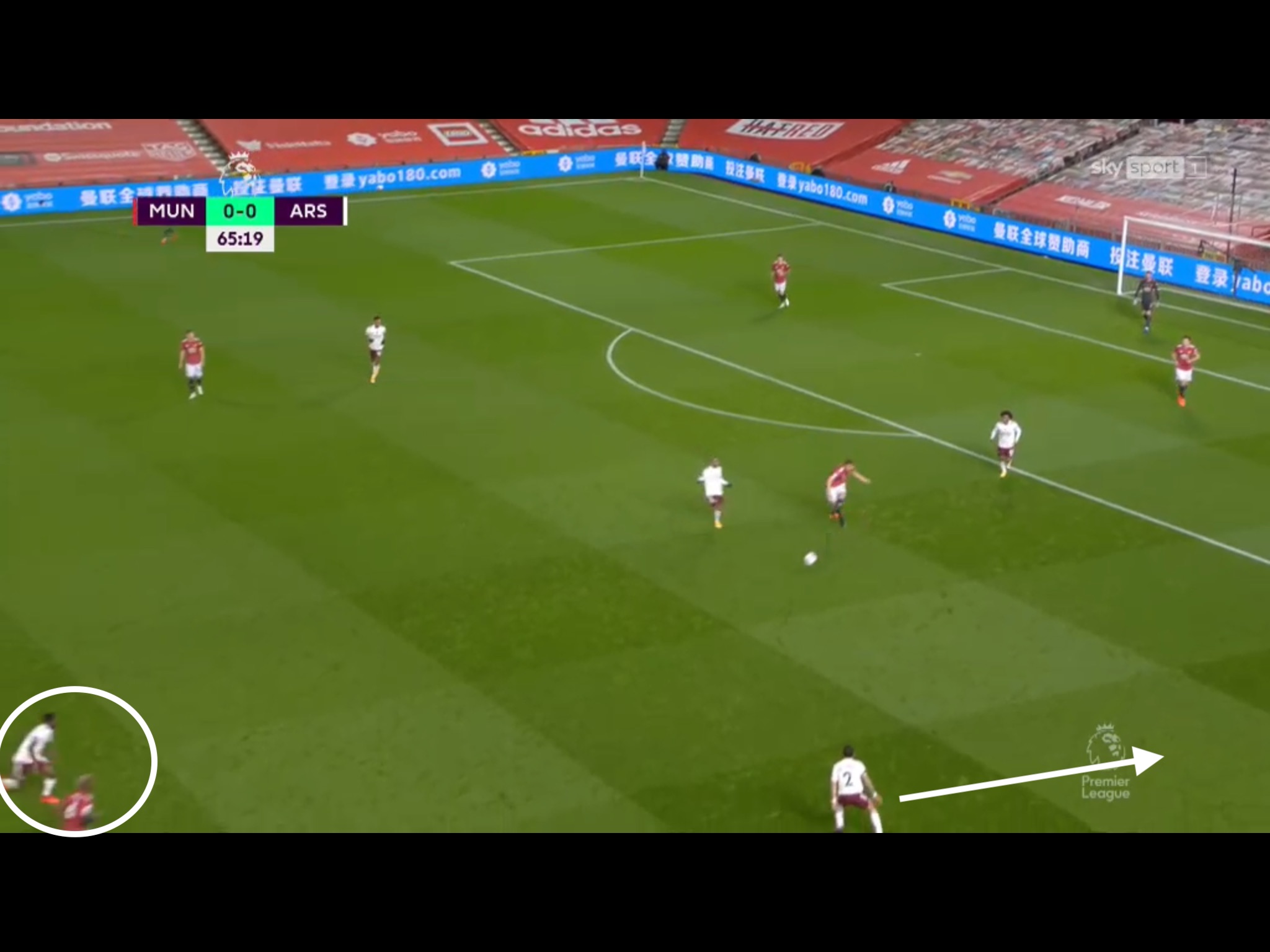 “The positional game doesn’t mean that you have no freedom on the pitch,” Willian said last week. “You have the freedom to move, but many times you have to respect the position, what the coach asks, the instructions, understanding that it’ll be better for the team.”

It’s safe to say Hector Bellerin embodied what Arteta wants from his players going forward at Old Trafford. The Spaniard was the team’s best offensive player, with his understanding of the system and his role within it shining through.

Bellerin offered spectacular variability in his movement. Often overlapping untracked, outnumbering Shaw as United’s narrow diamond shape meant he had no opposition winger to track him. 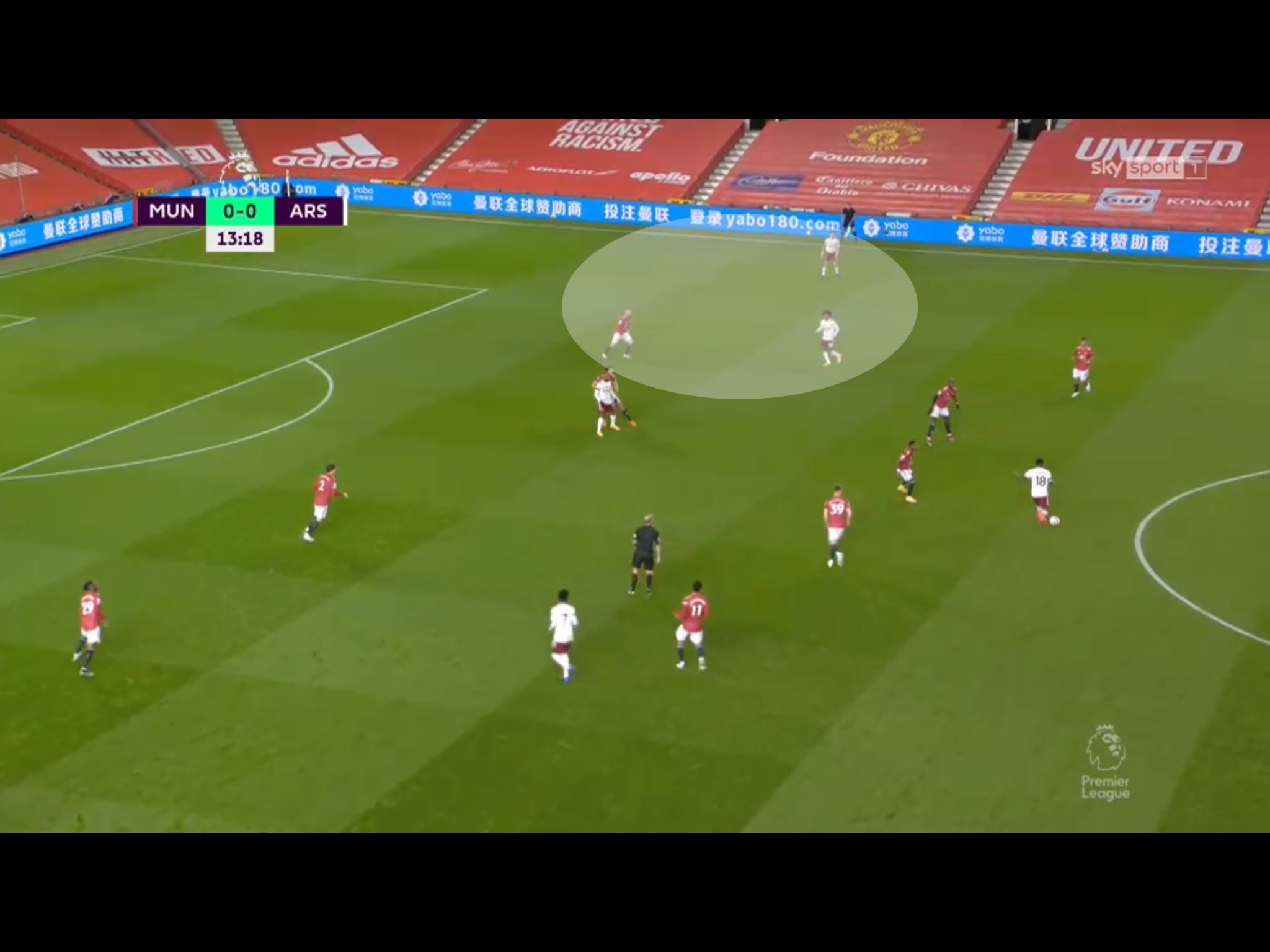 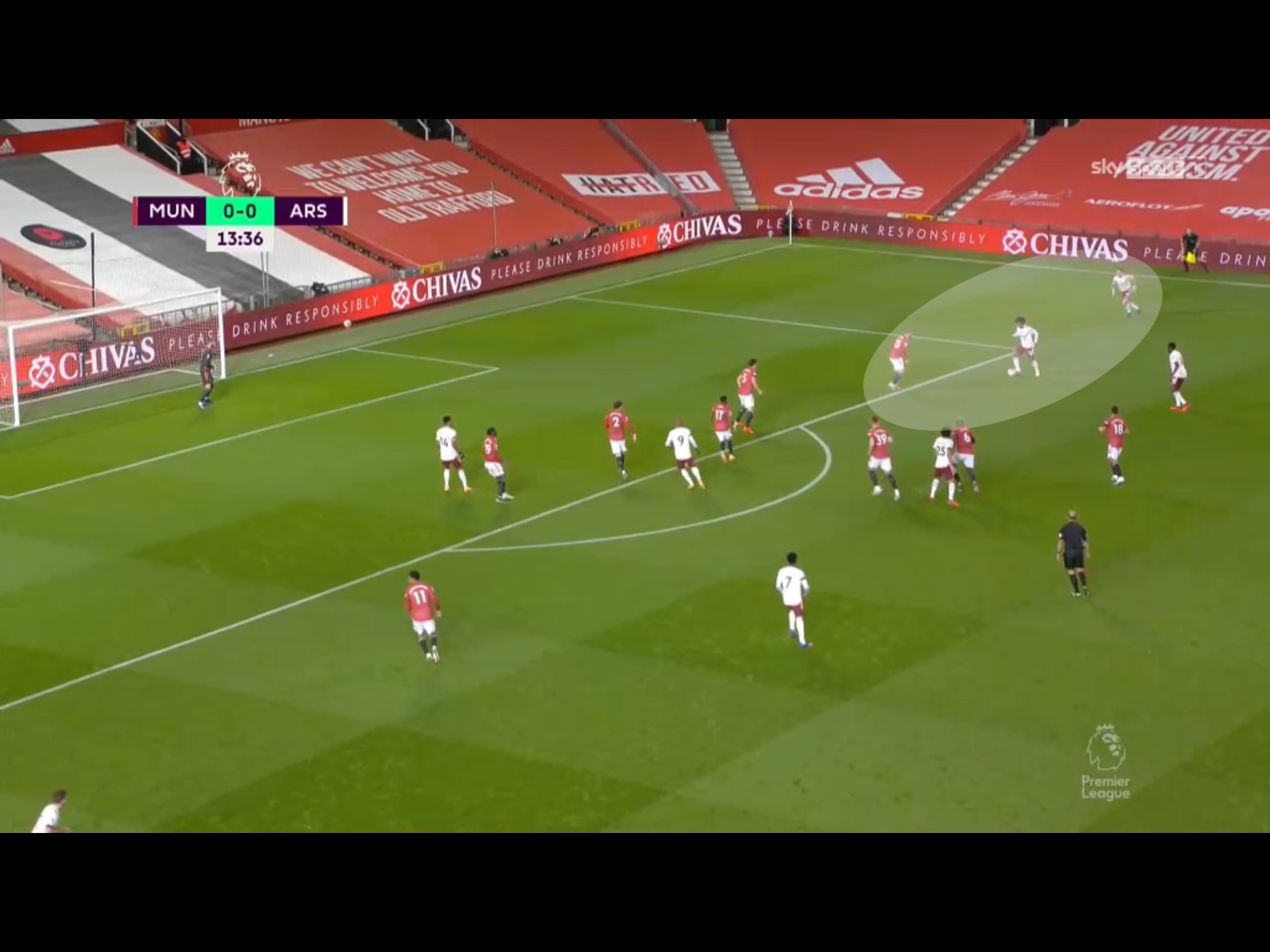 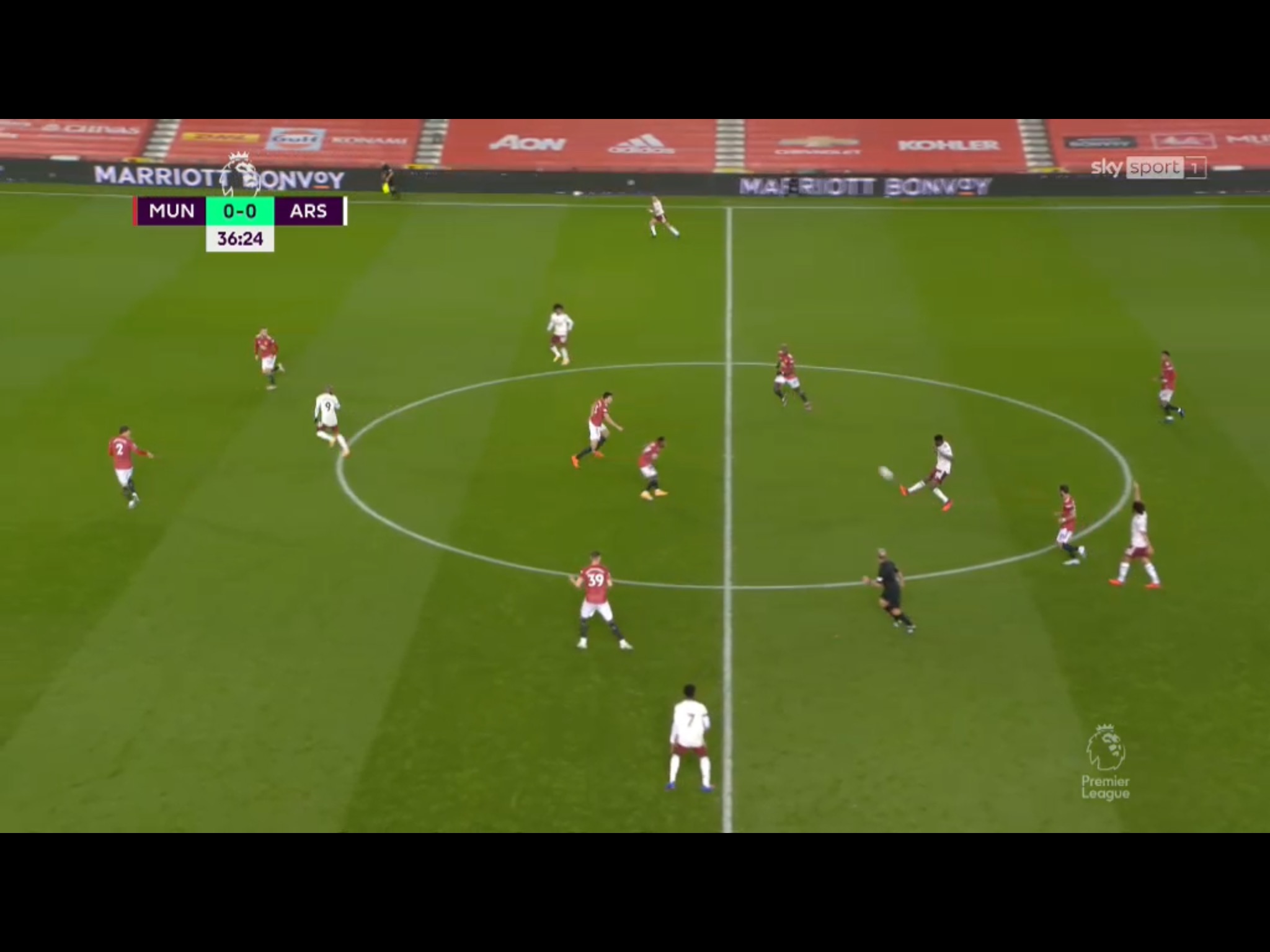 Those overlaps led to Aubameyang’s near miss at the far post and the dinked cross that saw Aubameyang nearly find Lacazette open in the middle of the area. Even if they didn’t lead to shots on goal, Arsenal were centimetres away from two massive chances. It was also Bellerin’s cross from a position further inside the pitch that almost saw Saka score a headed effort, which brings me to how well he interpreted his role when he wasn’t running outside Willian.

The Spaniard frequently moved inside, telling Willian to retain the width on the flank. From there, Bellerin could stick close to Shaw, keeping Willian open out wide, or drop off to receive the ball between the lines and behind the United midfield before driving at their defence. 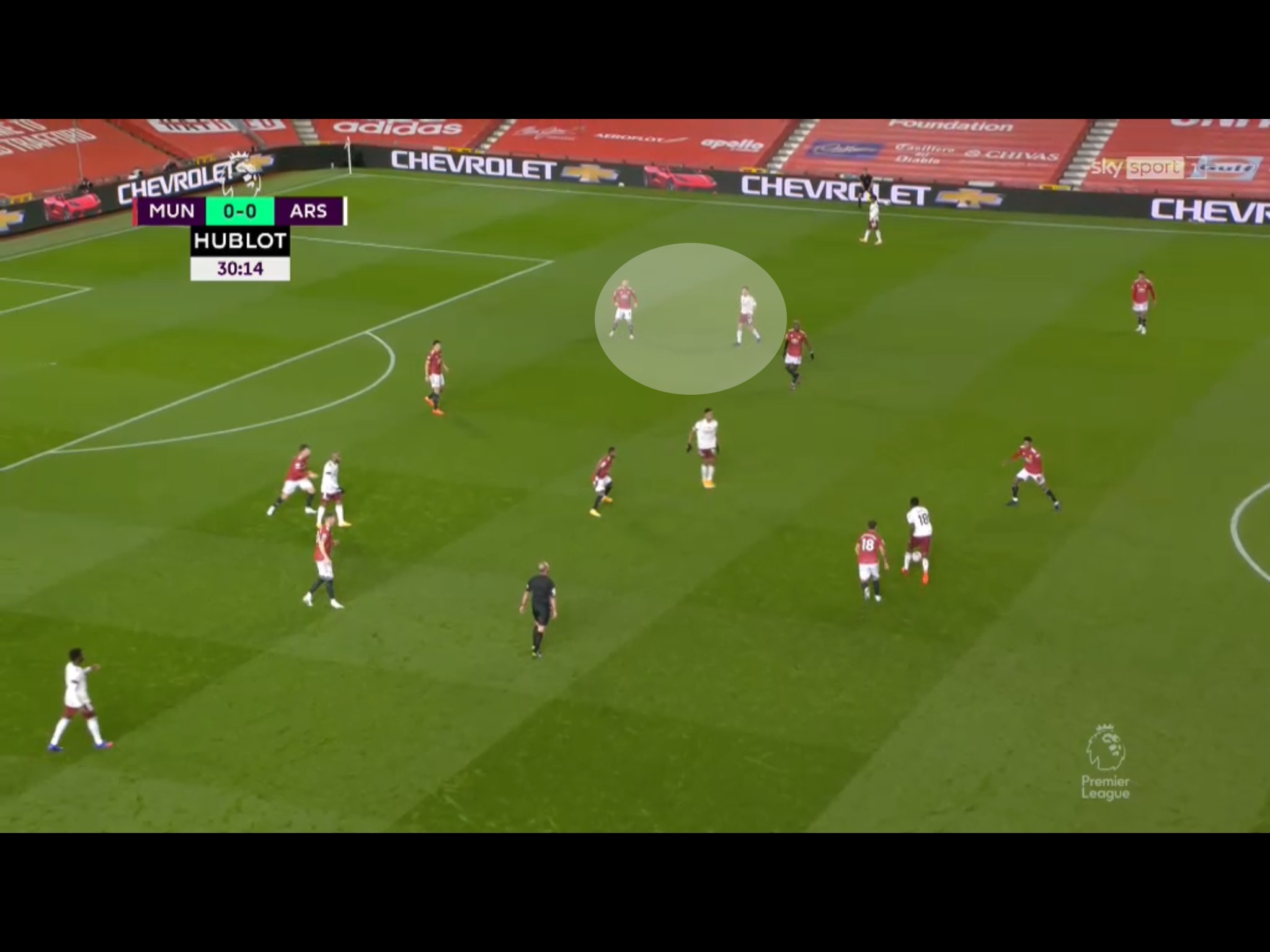 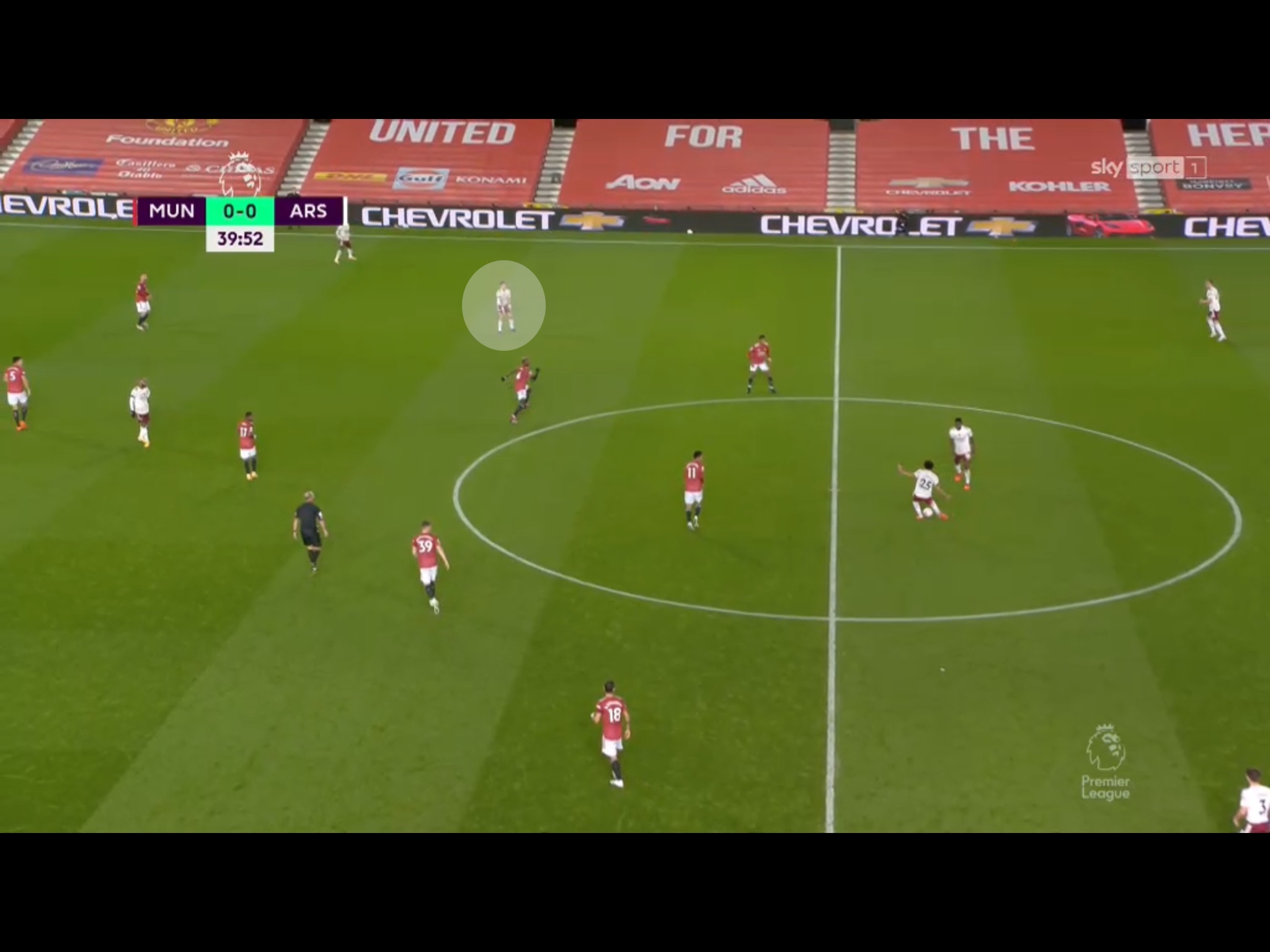 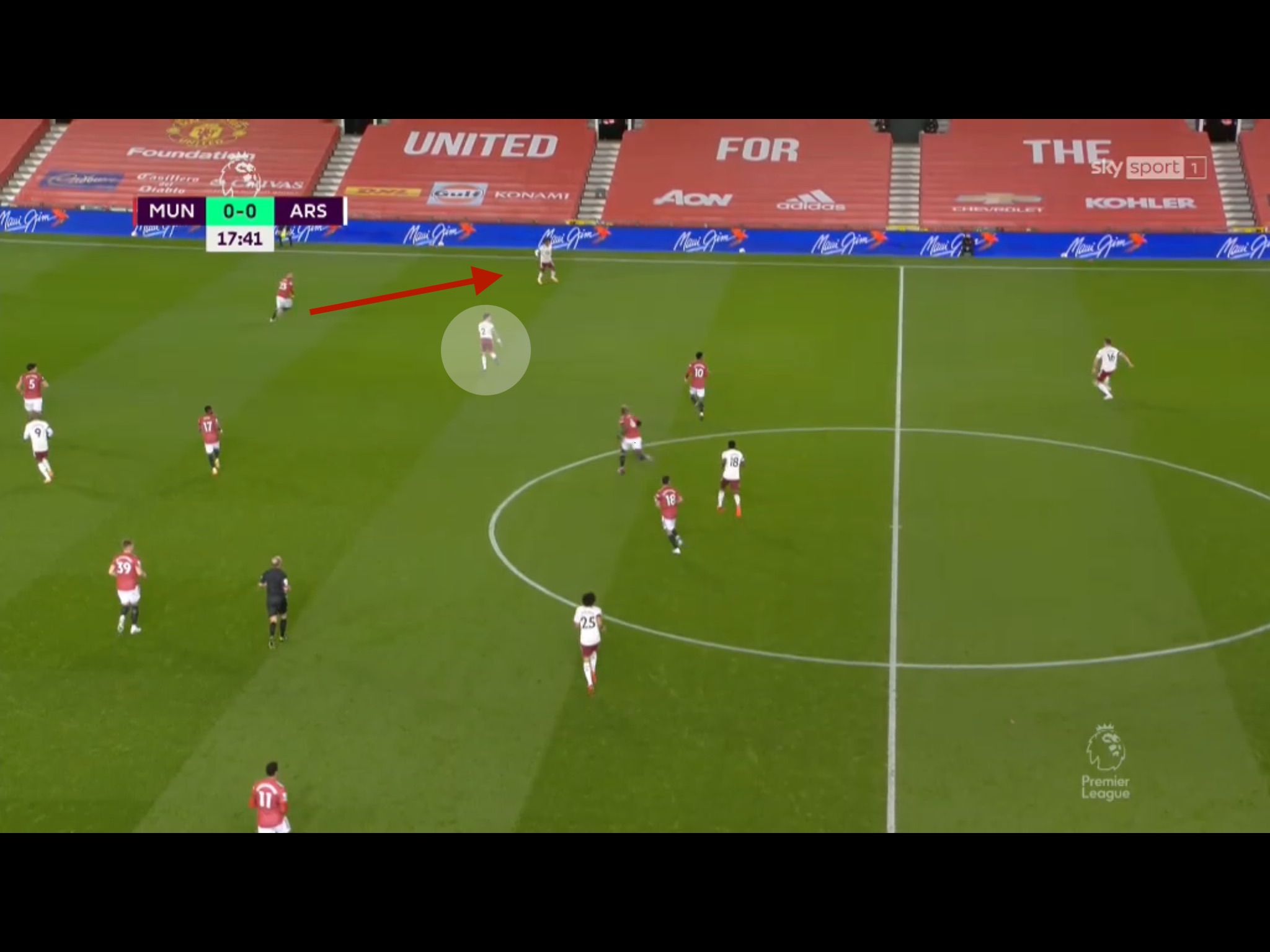 This positioning to receive the ball was particularly useful and something Arsenal lacked against Leicester last weekend when, with Aubameyang also on the right, Bellerin was tasked with constantly overlapping. In each of the examples above, Bellerin is giving Shaw a problem to deal with – does he leave him, or leave Willian?

The Arsenal ‘front five’ were often too flat against Leicester a week earlier, somewhat stifled by Leicester’s back five but more by their own lack of movement or invention, with Bellerin and Ceballos sharing the right flank and the Arsenal frontline parked up against Leicester’s defensive without anyone offering an option between the lines.

Saw this picture on Arsenal twitter & highlighted (red circle) the key deficit. An adept 8/10 in that pocket completely changes the threat level & manipulates the defensive structure. 2nd line has to pinch centrally, backline CB moves up. If not, Dani plays a line breaking ball pic.twitter.com/HIr0qaMiB2

When he moved centrally and dropped a little deeper, Bellerin became an instant remedy from the approach against Leicester that left Arsenal relying almost entirely on David Luiz playing pinpoint cross-field passes.

These central spaces suit Bellerin well and his decisions to tuck inside into them underline his understanding of the system. It is, perhaps, no coincidence that he spent some time at La Masia when Pep Guardiola was Barcelona coach and seems to understand exactly what Arteta wants from him.

There was also, of course, the superb in-to-out run that won Arsenal the penalty. It’s a run that Bellerin times well and uses to great effect when in the final third, either to receive the ball or drag an opposition player out of position. 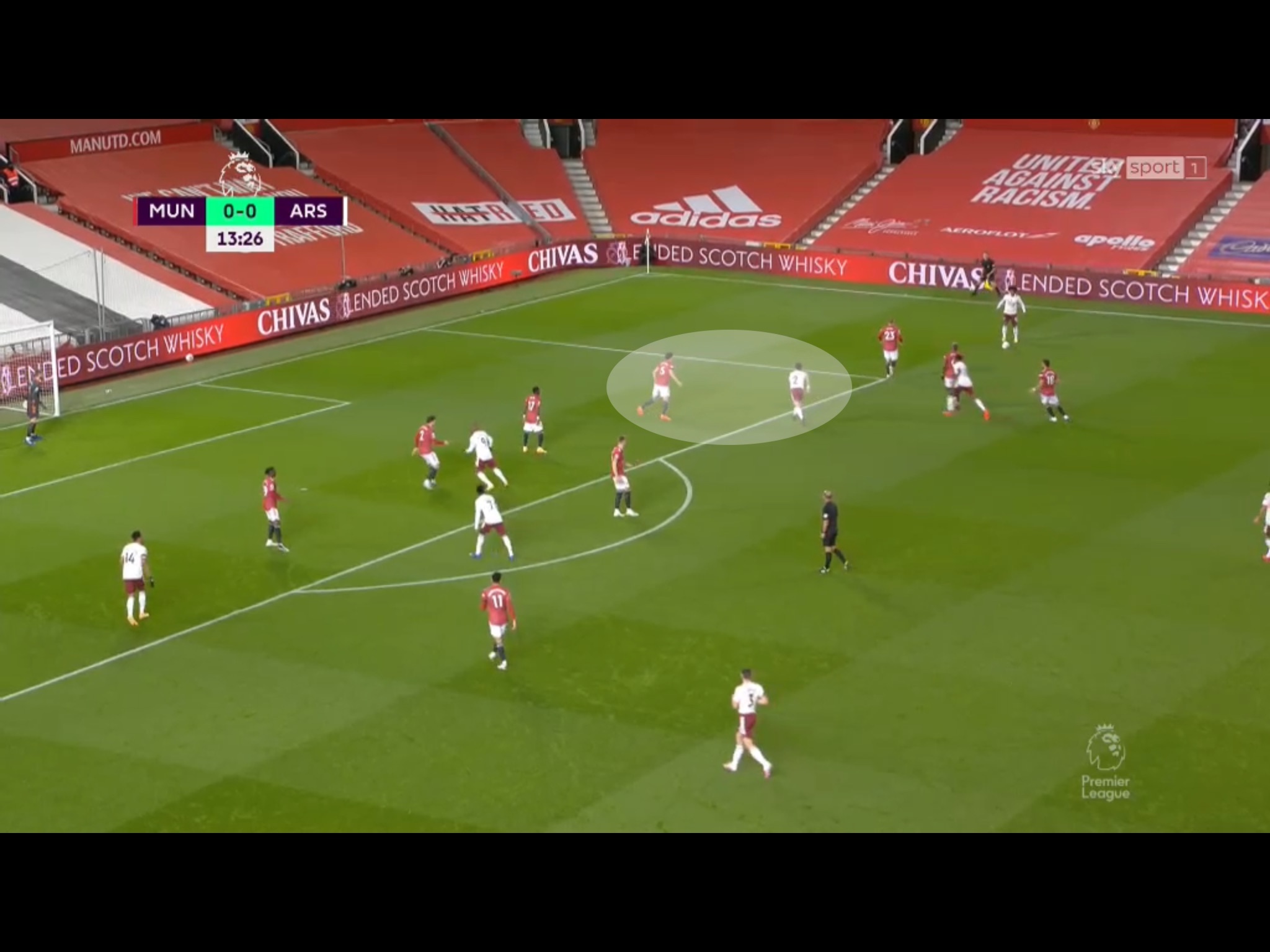 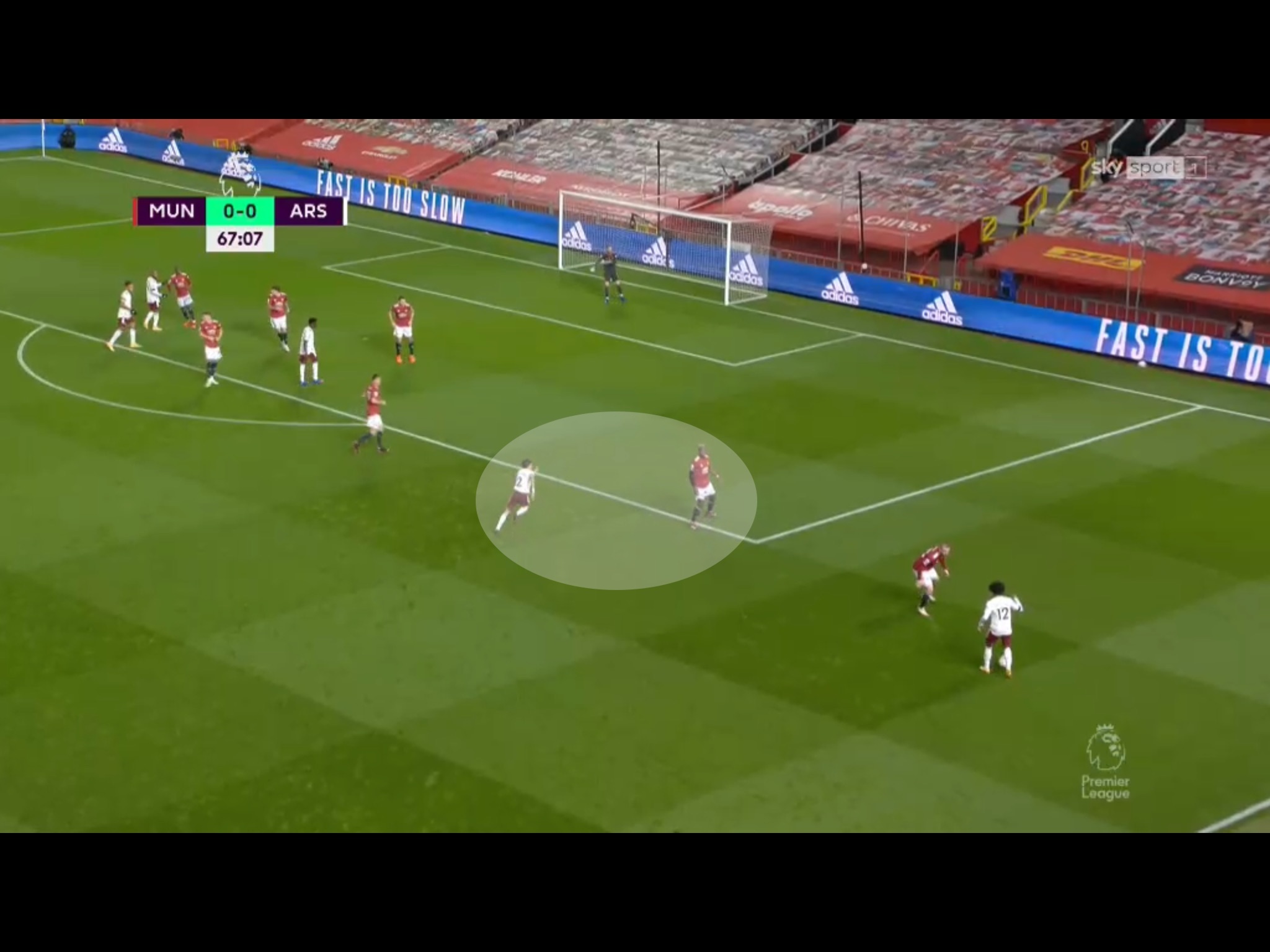 That ‘front five’ that Arteta wants to cover the width of the pitch is still in use but Bellerin’s adventurous running and interpretation of his role meant Arsenal were a lot less predictable when they did reach the final third. Ultimately, that was what won us the game.

At last, we left Old Trafford with three points.

On the day Ole Gunnar Solskjaer made it to 100 games with Manchester United, there was more than enough about Arsenal to suggest they’ll be in a better place by the time Arteta reaches the same milestone. Creating more chances is the next step for this team but this was another landmark result and a sign that we are on the right track.