In the 83rd minute of Barcelona’s La Liga tie against Real Sociedad, Marc-Andre ter Stegen went from a low to a high and back again to keep the ball out of the net.

Willian Jose, who scored for Sociedad earlier, fired a shot at goal from just outside the box after a loose ball bundled his way, which Ter Stegen spilled in a nervy moment.

Fortunately for Ronald Koeman and Barcelona, Ter Stegen recovered brilliantly from his blunder as he blocked Alexander Isak’s rebound effort from seven yards out.

Video: Tim Sherwood’s analysis is as accurate as ever as he has a shocker for Liverpool’s winner vs Spurs 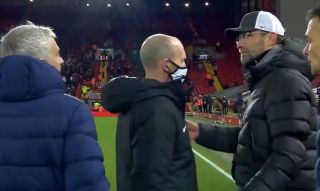 Video: Heated scenes as Mourinho and Klopp clash after the final whistle – What was said

The Catalan outfit held on for a 2-1 win, if this moment went sideways they would’ve dropped points and the German star would’ve been public enemy number one.