Four goals, a clean sheet, and Arsenal’s best Premier League performance of the season made it a nice start to 2021.

On a cold, snowy night at the Hawthorns, the man who doesn’t feel the cold epitomised everything that was good about us. Kieran Tierney’s relentless energy and desire to make things happen was evident from the start, and after a notoriously shot-shy team had had 6 attempts on goal in the opening 20 minutes, the left-back made sure we made that pressure count with an outstanding effort.

His push and run beyond the defender was gloriously old fashioned, the stuff you see in the schoolyard, but it worked. He then took it into the box, and with his right foot curled a brilliant shot beyond the keeper to make it 1-0.

Before that, Bukayo Saka had been causing West Brom all kinds of problems from the right, and was unlucky not to have an assist to his name with a couple of wicked far post deliveries for Pierre-Emerick Aubameyang. Just before the half-hour mark though, he was on the scoresheet, and what a goal it was.

Arsenal built patiently from the back, switched it to the left, brought it back towards the right, and then hit the light speed button. Bellerin fed Smith Rowe whose first-time clipped pass around the corner into Saka was the trigger. Saka played it to Lacazette as Smith Rowe continued his forward run, the Frenchman’s first time pass was perfect, and the young midfielder’s first touch with the outside of his left foot was impeccable. Watch it again and again, it’s that good. It allowed him to then guide the ball across to Saka who had the simple job of tapping home from close range, but the goal was all about forward thinking and movement, bravery to play rather than take the safe option. A goal born in Hale End, as two Arsenal Academy lads finished off a superb move.

Saka has been good this season, but he’s come to life in the last few games. The move to the right is part of it, and I think he and Bellerin are the best, most balanced partnership we’ve seen there for some time. However, I think Smith Rowe has helped enormously too. The most impressive thing about him is his ability to combine well with everyone. He’s on all of their wavelengths, not just one or two he’s played with at youth level. It’s still really early, obviously, but if Arsenal have been wobbly this season, then Smith Rowe’s emergence has provided some glue to keep everything steadier. And from steady you can build moves like that second goal.

In the second half, the 20 year old was unlucky not to score his first Premier League goal when his shot was blocked on the line, but he was in the right place to take a pop. It fell for Lacazette who made it 3-0, and the striker had Tierney to thank for his second of the night. Perhaps it was a little ungainly looking, but it came from that left-hand side again. Even in second half injury time, there he was, bombing down that side of the pitch, getting forward to make something happen. I mean, look at the heatmap: 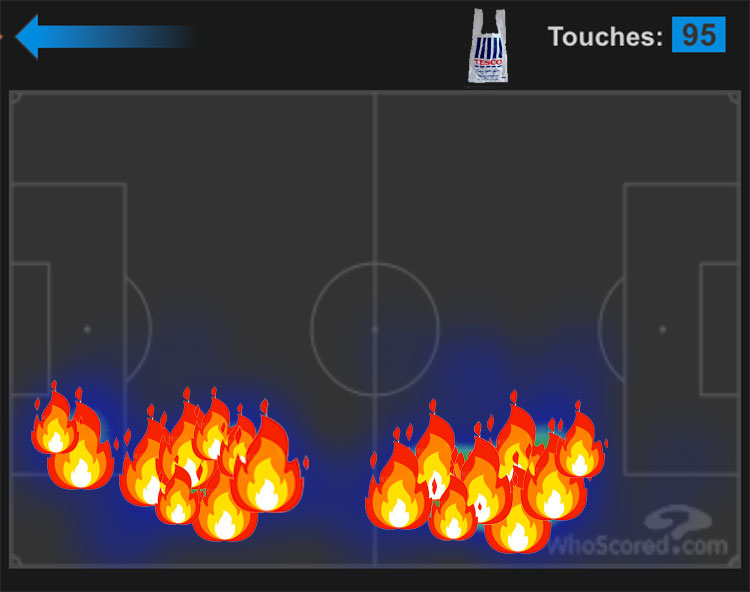 That is genuinely his heatmap, btw. I just replaced the hot bits with fire emojis. Not that he needs fire. Speaking afterwards about playing on a chilly night, he said:

Yeah, it is what it is. Playing in Scotland, I’m used to a bit of cold weather. It hurts nobody.

It’s a shame Aubameyang didn’t get on the scoresheet, as he could really use a goal, but I thought there were some promising signs from his movement. Dani Ceballos came into midfield and did well. Lacazette has really stepped up in the last little while too, and at the back there’s something interesting going on with Rob Holding and Pablo Mari. Early days still, but they look to be a balanced pair, which can offset some individual issues players might have.

But make no mistake. This was a game which showcased the future talent at this club. Tierney is still only 23, Saka 19, Smith Rowe 20. That’s where the good times lie. Yes, West Brom aren’t very good, and I was sort of amazed at Sam Allardyce afterwards talking about how he’s learned they’re not great when they open up. But I’m not sure they did open up themselves as much as they were opened up by us. You don’t take a 1-1 with Liverpool on the back of a solid defensive performance and then decide to go toe to toe with Arsenal, even an Arsenal that has been as poor as we have of late.

This season I’ve watched us be not very good against lots of teams, teams we had been expected to beat, so when we play as well as we did yesterday, I’m going to choose to view is through the lens of optimism and encouragement rather than dismiss the quality of the opposition. Of course it’s a factor, but so much of what we did was positive, and we were rewarded for it.

I thought we were really good both defensively and offensively and attacking-wise we had movement that is exactly what I want and exactly what we try and teach the players to do. In other moments we became a little bit sloppy in certain moments when we thought that the game was won. That’s something we have to improve. But overall it’s close to what we want.

That too is encouraging to me. I want to hear the manager talk about the way we want to play and too often under Arteta it’s been functional, at best. This was good football, played at a high tempo, with quality and incisiveness in the final third. Look what happens? You create, you score goals, you boost confidence. I know it’s not as simple as just ‘play well’, but when you lose certain players who have inhibited the game you want to play and replace them with quality – as well as hunger – it makes a difference. Their ages don’t matter that much.

So, three games, three wins, 9 points in the last week, and things are looking a lot better and everyone’s a bit happier. Without wanting to heap pressure on these guys, I wonder if the returns of Smith Rowe and Martinelli, and the decision to move Saka to the right, will be viewed as pivotal moments in our season. I still expect some ups and downs, but compared to the dark place we were in before the Chelsea game, it’s far easier to see the way forward now.

Right, I’ll leave it there. James and I will have an Arsecast Extra for you tomorrow as usual, until then, enjoy your Sunday.

The post West Brom 0-4 Arsenal: Gunners heat it up on a cold night appeared first on Arseblog … an Arsenal blog.